Chapter Thirteen: It's always something

In chapter twelve I left you with the Blast a block from heaven due to chain adjustment issues. As usual what I expected to be a quick and easy completion to a part of the evolution of the Blast was not. The half link showed up on Saturday afternoon so I went ahead and slipped it on. The chain was still a bit looser than I would have liked but on the stand when running it through the gears both with and without power went without a hitch. So off for a test ride. I have to say that this new gear ratio is much better suited to my slow 60 per minute cadence and the torque was really quite surprising. I can now actually use this like a scooter on the flats and mild inclines no pedaling required if I'm feeling lazy...sweet. I swung by the post office and bought some stamps then decided to head over to the Northgate mall to check out all the new construction and such. Not shopping mind you just sight seeing, this at around 5:30PM peak traffic on some major arterials.

This turned out not to be a good choice. While running at about 25mph with a fair amount of pedal power from yours truly of course I let off the throttle to slow for a car that pulled out in front of me from a side street. Then I pumped the crank rather hard before turning up the wick, clank grind crunch and no motor power...WTH was that? Oh and Ms. Cell Phone in the car behind me was a bit surprised that the bionic middle aged guy just hit the wall and slowed to about 10mph, screech. Missed me by that much, almost got goosed by a Mercedes hood ornament, sheesh a bit more work to do I see.

So I pull up on to the sidewalk and survey the machine. Mr. drive chain is hanging from the crank arm like a limp noodle. I manage to get it back on and try the drive train with pedals only and see the motor drive chain walks off the motor sprocket when I am pedaling faster than the motor turning. Guess that chain is still too loose. I nurse myself home and after looking at this decide that the only solution is to add an idler set up. Off to the tote full of hardware left overs from old projects to see what I can scrounge up. I only have a little better than $10 left in the budget for this little test. Well I managed to come up with all the parts by using a 1 5/8" wheel I removed from an extra caster, cut a 4" piece from a Brainard reinforcement T, plus various 5mm nuts and washers. I did need a 5 x 40 mm cap screw so off to the hardware store 8o cents for a bag of four.

About 15 minutes of hacksaw, drill and file work and the idler was ready to install. These gear reduction motors have lots of extra screws that make for good and easy attachment points. Thanks to that I had it all done in less than half an hour. Got up this morning and went about my usual errands, grocery store, pharmacy, etc. Worked great, no issues just happy motoring. 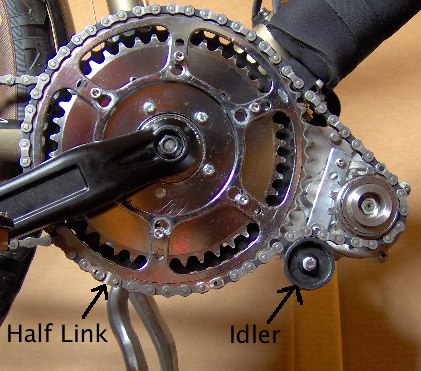 There it is, the final version of Kona Blast elationebike 1.0 drivetrain. It is still a bit short of meeting my needs to easily climb the two killer hills but close enough. I'm sure the 13t drive sprocket would be better yet for climbing but I want to use this now that riding time is here.

After having a chance to finally see a few pictures of the new stuff Allan has in the works anything I do will be wasted time. He still is working on battery layout and waiting on some new bigger watt motors to test. I'm sworn to secrecy about the details but believe me there are some potential surprises in store. Want to put one of these with the bigger motor on a rear suspension bike? The new set up will make this possible.

I was impressed with the improvements and new features that I saw and things are progressing quite nicely. This improvement process hasn't been cheap for him, not to mention time consuming. I saw one concept component that cost $2000 to have made. You don't get that from the knock off guys. I'll let you all know when they hit his website if he is bashful or forgets to make an announcement. Not bloody likely though.