Chaper Five: Patience is a virtue

Santa was good to me, no coal, instead an Old Man Mountain Red River rack and some Rivendell spec Nitto Albatross bars. Both will make top quality additions to the Blast....sweet! Thanks Santa.

Then back to reality. It's been a long week of waiting for ordered parts. In addition to the clamps for the ebike project I'm waiting for a burner switch for the cook top and a new dash board for the better half's car, oh yeah those don't count here, oops. None will arrive until next week sometime.

I did complete all of my motor mount machining, took a while using only a drill and files but turned out ok. Not exactly laser cut accurate but not embarrassing to show either. That done I decided to take advantage of the nice weather and take the bike for some test miles to see how the street conversion pieces held up. Glad I did as there were the usual issues involved. Can't wait to do this under elationebike power.

First item was the Planet bike Speed Eze front fender. Over bumps and the like it flopped around something fierce. It was mounted as the manufacturer specified with a tie strap acting as the very front mounting attachment. This proved unsatisfactory on two counts. First the movement and second due to my disc brake the wheel sits a bit off center so the fender did not cover one side very well. Back to the garage where I made a L bracket, aligned and attached the fender with bracket, nuts and screws. Tie strap was tossed into the trash. So much for quick R&R capability. Problem solved now, full tire coverage and no annoying flopping or tire scrubbing. I still need to trim the fender brace ends but may need to make further adjustments so that won't happen until I'm satisfied they are right.

Second item was the Esge double leg stand. When deployed and then retracted a few times it wants to twist and will eventually unscrew. This due to the aluminum ribs not being strong enough to bite into the stainless motor mount and keep it in place. For this I'll drill and pin it to the motor mount once final adjustment is achieved. 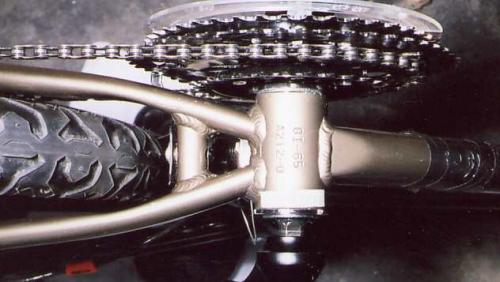 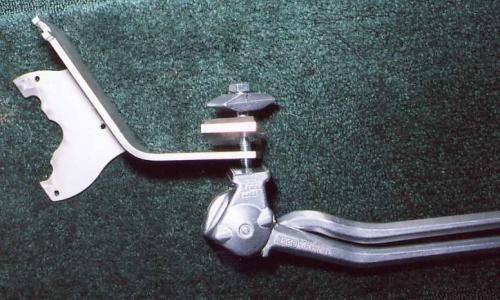 The hardware build up of the Esge stand and motor mount. 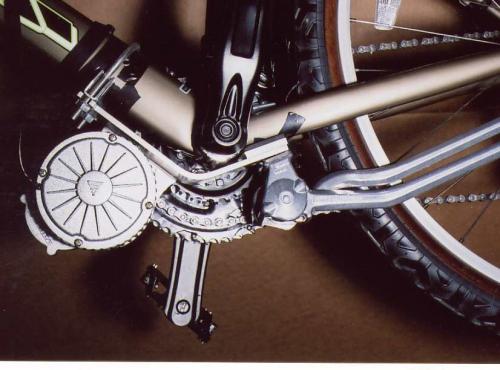 The almost final mock up of the hardware build up and motor mounted to frame. Will be finalized once I decide upon a front clamp.

As for the front clamp I'm pinning my hopes on the V saddle clamp, the brown leather belt and some heavy duty shrink tubing. Since DX Engineering had a $20 minimum I went ahead and ordered a couple sizes of resin mounting blocks as a fall back. Just in case the V clamp doesn't spread the load enough.

The next report should be the finalized motor mounting. After that I'll unwrap the controller, levers and wire harness and hopefully get the initial installation completed. I've also identified one more mod I'll need to make to accommodate the elation ebike kit but that will be added in a future installment. (Hint) Lets just say the Nitto bars will mean re-cabling as the current flat bar cables are too short so might as well take care of it and the ebike issue all at once.

In the mean time the good news is that the brown leather belt yielded a few inches to use as frame protection padding and is now too short to hang myself with. That only leaves two potential answers to the multiple choice question.

Nice blog, thanks for posting... many folks considering e-biking will enjoy learning from your experiences.

You might consider distributing the force of the clamp along the down-tube lengthwise: the v-clamps will do that somewhat; but angle-steel is cheap and can spread the force over many inches of the top of the downtube (and the bottom of it too, if you wish). You can still pad it with your belt...

I don't see a good place where the supplier intended to allow for taking slack out of the drive-chain. Your adaptation-plan might include an adjusting method (like a turnbuckle or adjusting bolt) that incrementally moves the motor further away from the the bottom-bracket to tighten the drive-chain.

If you are avoiding modding the bike, you can clamp material to the frame to attach stuff to... a wooden wedge in the area between the down-tube and seat-tube can be a useful place for connecting your brackets and clamps. Wood is remarkable fabricating material: strong, easy to shape and cheap.

You will never regret the purchase of a rotary tool like a "Dremel" for this kind of project... you will find it useful for just about everything else around the home and garage too.

Great job on this bottom bracket drive of yours. I have a bike I would love to put this setup on. I was wondering if there is a one-way bearing or freewheel anywhere in your system. Do you have to pedal when the motor is in use? Can you pedal without motor drag when the throttle is off? What is the size of the outside sprocket and how is it attached? I'm guessing this is the drive sprocket for the motor, correct?

I am very interested in how your system will preform as I have thought of building something very close to what you have. I have one of those motors but I wasn't sure it could pull a bike with my 200 Lbs sitting on it.

Thanks for the ideas,
Chas

Chas, this system has two freewheels.

One in the crank and one on the motor. So you can pedal optionally and no motor drag when biking without assist.

The 42 tooth outer drive sprocket has the triple rings attached to it actually. Think a Cyclone crankset with a triple ring attached. Same as an IPS stoker crank set up.

The motor has a 14 tooth freewheel on it.

I finally received my clamps today so progress can resume in short order.

Believe me, I'll post the performance results as soon as I have some.

Thanks for the tips

Thanks for the idea of the steel angle. I have five feet of it and never thought of the lengthwise stress reduction.

As for the chain adjusting the motor mount has a slot in it that allows adjustment. Unfortunately I got one of the first and the slot is off center which is not appropriate for my application. Alan has since made provisions to use this in my type of set up.

Glad to see some find this info helpful. It was getting pretty lonely here over the holidays.