Chapter Nine: If that's a conversion, I've had it !

Took the early part of the day to get the wire routing finished. No matter how I clocked them, the throttle and horn controls just wouldn't go around these integrated brake and shifter controls. So I just left them short and over the top. I'll work them out after I upgrade the shifters. The brake cut out switches also had 3 wires instead of the usual 2 and rather than figure out how to integrate them using a Magura 2 wire switch and custom bracket I took off the works. Just unplugged from the controller and removed them. Then I added shrink tube to all of the metal connector cases I could to reduce the chances of paint chips. That done I extended the motor wires and battery to controller wires. Zip tied the works after routing them and adding shrink tubing and viola.......installation of the elationebike kit, version 1.0 is now complete.

Gave the kitty litter screw top / drive chain guard a quick dusting with satin black paint and snapped on the finishing touch. The blue just clashed too much to be visually pleasing ( after looking at the snaps I think silver would be a better choice, oops one more thing to re do). Turned the key, blipped the throttle and ran her through the gears while on the Pletcher stand and it all seems to work. All in all the package is very unobtrusive and lets me still have a bicycle with a little help on the pedals. The Blast weighs 50 pounds now give or take a couple, that's including the 36V 10AH battery pack and motor, not bad.

The next thing to do is trim the excess from the fender struts now that I'm sure they are placed correctly, add the Old Man Mountain rack, find a decent mirror and phase one will be totally complete. Of course when I tried to quickly install the rack guess what ? No go as I have no V brakes just empty bosses with larger threaded plastic plugs in a larger threaded hole than the hole size in the bracket. I will have to measure it closely to see if I can just enlarge the existing hole and use a larger cap screw or if that will give me a case of break out on the end of the bracket. This Kona with it's higher end components seems to need modifications to install anything.

I also noticed during my last test ride that the Albatross bars had a tendency to rotate in the stem. Due to them not having a spline on the center. While I had the heat gun and shrink tube out I put a one inch piece on the center of the bars, problem solved, no rotation now.

I am planning on using it for a while to see what it can do and what needs help. If I had it to do over again I wouldn't change a thing. Due to the fact I got the bike free when I bought my car 7 years ago I have a decent ebike now for about the price of a Suede E but with much better quality components. That car now has 21,000 miles on it, probably rot before I use it up. Still, I'll be trying to further cut down my current rate of 10 gallons a month petrol purchase for all the previously non-discretionary car use. Most importantly though, I have made some new friends.

Hopefully this blog has provided some inspiration and shown some folks who may have been feeling short on equipment and or that they didn't have the skill or experience that they can do a conversion. You don't need a huge shop full of tools, only a modicum of patience and the desire. YOU CAN DO IT. Just plan on nothing fitting out of the box without modification and it taking five times as long as you think it should. Most of the extra time will be spent waiting for the UPS guy to bring you that one piece not available locally but needed to solve some unforeseen minor issue. 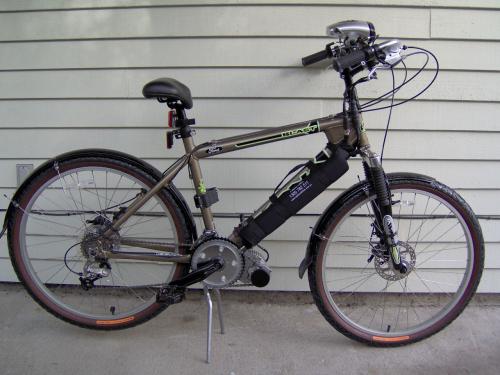 The Blast has now been converted from an abuser friendly downhill MTB to a fat tire city e roadster. Pee Wee Herman in the 21st century. If I could only find some of those cool hard bags,a trunk, handlebar streamers and..........

As my dear departed father in law used to say " I haven't had this much fun with my clothes on in a long time". Till next time, one elated Sturdly is signing off.

Whew! Ya did it!!
Well Sturdly, I guess you CAN relate to my comment (in my blog) about No Two Bikes or Motors etc. being the same ... One size doesn't necessarily fit all.
Good job on letting us know how you delt with the issues and what to expect. You're 100% right, patience is the key.
You've given me good insight into what to expect in my upcomming build. I can only imagine that I'll have some gnarly issues to deal with.
The difference will be that I'll have only myself to blame since I'm making my own kit.

I bet those Seattle hills will be a challange to the new "Fat Tire, City E-Roadster" but it sounds like it's going to climb them just fine. The ability to gear down or up as required is a great way to go.
I thought long and hard about a way to use my existing power train. One solution that I tossed around was to use a jackshaft between the BB gears (pedal sprockets) and the rear freewheel sprockets. By placing a freewheel on both the driven gear (from the BB sprockets) and another freewheel on the drive gear (to the rear freewheel sprockets) one would be able to pedal (or not) and use the motor (or not). It started giving me a headache just thinking about it so I decided on the left hand sprocket.

Actually I have found the set up to be a bit over-geared and underpowered for the real steep stuff. I've made some calculations and believe that a 13 t motor gear and a 54 - 60 t chain wheel would more appropriate. That and about 250 more watts. I have held off making any changes but will probably start experimenting with the gearing soon.