How necessary IS reconditioning?

So, how do I hook up a reconditoner/charger to my 36v bionx lithium-ion battery? I'm using it for long-ish distances (50km or so), so I figure I'll need to keep the battery tip-top since I'll be putting some strain on it.

Are they really necessary if I'm keeping it charged at home all the time?

Any info at all on battery maintenance would be downright awesome.

`
Welcome to our V is for Voltage Community, what do you mean by reconditioner/charger?

I'm looking for a similar idea to a lead-acid battery conditioner (basically a trickle charger that pulsates so as to weaken and ultimately remove the sulfate buildup on the inner battery plates. The sulfate then re-disolves back into the electrolyte in the battery). Except that I'm wondering if there exists one for a lithium-ion battery.. sorry, I'm a little uneducated. I guess a better question would be "How does a lithium-ion battery hold a charge? And can it be re-conditioned, as these batteries also tend to lose their charge after much use?"

Sorry for the confusion, and thanks for helping me to clarify that one!

I have heard of using this type of charger on Lead Acid batteries, they cause the buildup on the lead plates to be basically blown off the plates. I have been using Ni Cad and NiMH batteries for sometime now and I have not heard of a reconditioning charger for these battery types.
I think you are confusing battery types, but I have been know to be wrong.

I have exactly the same setup. The tips I got on lithium ion battery maintenance were:

- Charge as close to room temperature as possible. The Bionx manual lists the temperature range. If the battery is hot or cold, bring it inside and allow it to equilibrate before charging.

- It is better to store them charged than not .and it is better to discharge them shallowly rather than deeply. This being said, LiIon batteries are much less harmed by more strenuous use than SLA.

- Don't leave them on "float" for long periods of time. Leaving the charger on over night is good, but leaving it on for a week is not.

I don't believe there is anything else to be said. Ride and enjoy!
--
Full time ebiker
BionX and Wilderness Energy

I have no idea of the battery type used in the Bionx systems.

The best thing for batteries is to discharge them at lower rates, and recharge them in correct ways, and over size your battery to meet your load and, time requirements.

SLA like low charge rates, and according to one howto site, like to be charged fully, then, left for say over night, then recharged again for ,
full cycle again this is said to restore lost capacity.

Most SLA like float charging, specs suggest life span is 3 or more years on float charger.

Nicads one site said, each cell likes to be discharged to 1 volt then, to .6 volts per cell, I think you need to discharge each cell by its self,
to get this kind of level of exactness. Discharging these high voltage nicad packs, down to low voltages can result in one cell being charged in reverse, which eventually destroys cells. This is why some don't recommend discharging nicad packs.

However they claimed that the tested nicad's, when discharging each cell exactly to specific voltages , did 10,000 recharge cycles and where still going strong.

One approach is not to do this discharge every time but ever week or so.

Dont over charge, and avoid very high recharge/ discharge rates, their is some voltage rise or drop to for charger to sense this.

Nimh not sure about these, I think they have internal cell distruction of some kind after 500 recharges.
Lithuim ? perhaps 2000 recharge cycles.

Probably Bionx uses these, and lithuim, since they are lighter, and can pack more power per weight then nicads, at the expense of lessor
cell life expectancy.

Oh you have lithium batteries,

I think I read that these should not be fully charged, or charged to reduced voltage in order to extend cell life.

Also you would be best to time your recharge cycle, to just before you use the battery.

For example leave battery discharged , and store in very cool area, then charge before use.

Discharge to 40% and store in cool area.

According to one article these batteries self destroy , from being fully charged and stored at high temps.

The damage does not look reversible.. 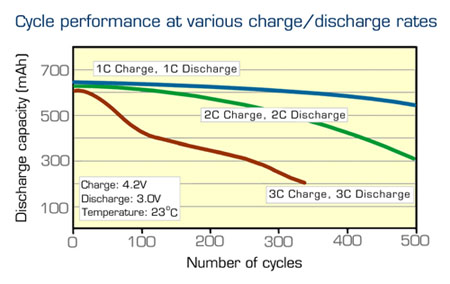 It will be a while before we know everything about L-ion batteries. Sealed Ni-Cd batteries had been around for quite a while before a general awareness of memory effect appeared. Who knows what surprises await the early L-ion adopters?