I'm very surprised. I thought I'd heard of others using the 48v lifepo4 with the BD-36. My understanding is also that it's possible to modify the BMS to tolerate the draw -- again, it was another thread in which someone communicated with Ping about a similar problem and he was able to fix it.

If the battery pack is shutting down that's not an issue of the BD36 motor but the pack.

On my BD36 bike I'm using a 36v Ping pack and sometimes the pack shuts down. It's a pain and it has to do with the Ping BMS (I suppose) protecting the pack against an aggressive discharge. It indicates the cells Ping sources aren't high power.

If you were to find a different pack with a different BMS that allowed more power then presumably it would work.

For example lithium cells, if the voltage goes too low, will be damaged quickly.

obviously my BMS is working. True, there is a way to by-pass the BMS. There are 2 other neg & positive leads, but they would have to be freed via soldering.
I'm going to be using it with my Aotema brushless, sensorless kit. This 48 v 15 ah lithium pack has about 2 hrs run time total. I'm going only a few miles and leaving it
on charger for a very long time ( breaking in pack).
It would be risky to bypass BMS on a brand new pack. Balancing with a new pack may be even more important. This is not a Ping pack. I bought it f/ Ebayer named olympics2000888.
On my brushless, BMS has never shuts down pack. I might sell the BD36

Longevity update: I have about 250 miles on the BD36 at 48v now. No problems so far. The motor still gets hot if I use full throttle for more than a few miles, but I think it would do that at 36v also (maybe not quite as hot). I can keep the speed in the low 20's until that battery runs out, and not much heat in the motor. I think the BD36 controller can handle all I want to give it at 48v.

Just changed brushes after 2300 miles. about 1/2 inch of each brush remained. I had to open hub as one of the brush spring was jammed and motor would not work. Maybe running on 48 v lifepo4 makes more arcing etc. This may be what caused brush spring to "jam."

I'm not sure how long the motor will last at either voltage. I have about 300 miles on mine now, maybe 350, only about 60 or 70 of those at 36v, and it still seems to run fine. Lately I have been hearing a bit of a grinding sound when I first start, which almost immediately goes away. I heard that a bit less when the motor was new, then it was mostly gone until recently. If this motor goes bad, I'll go brushless, which actually seems to be the only option now.

Its normal for some noise to be made by a bd36 when getting started. A bike with a fender will make the noise louder. Sometimes called a grunting noise, rather that a grinding, I found with my bike it was loudest when the battery had the most charge. Backing off the throttle and giving the motor less amps starting out would lessen the noise. If this describes the noise, you have no problems.

When I had loose magnets in my bd36, I did hear a scraping, or squeaking noise as the magnet rubbed on the coverplate. This would go away quickly after a few hundred yards, only to return the next time I stopped. This was a very different noise from the grunting, and would sometimes sound like a cricket chirping in the motor. I suspect you are hearing the normal grunt of a motor under a heavy load starting up.

I mostly agree with DogMan. I guess I had heard the occasional grunt if I gave it too much throttle from a dead stop. But if you're hearing a grinding or a scraping sound, I'm betting it's a loose magnet. My interpretation is that when the voltage is highest and you're generating the most torque, that's when a loose magnet can scrape across the rotor. What ultimately happened with my motor is that I began to hear a louder and louder grinding noise culminating in the motor turning minimally and I think my throttle indicator went from green to yellow on a quarter twist. With DogMan's e-assistance, I eventually got it apart to discover that 9 of the 10 magnets had become loose and had basically clumped together on one side of the rotor. My motor has about 2000 miles on it at 48v and the brushes are still about .75 inches long (original brush length unknown).

I had to remove and clean the magnets -- they're painted black and the paint was flaking off covering the stator and created a general mess. I had to clean the rotor, removing the old glue residue while marking the original magnet placements / spacing. Then I had to use a marine epoxy (PC-11) recommended by DogMan to put the magnets back on. Re-assembly without crushing fingers is a challenge. Regardless, the motor works fine now, although I think I over-drained and damaged my SLA pack during the death ride. However, even with stress testing, I have nothing like grinding sounds now. 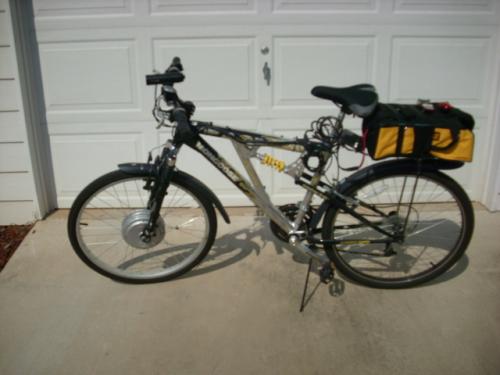 This is the finished project. Re: above noise, I think more of a grunt. 4 batteries in a DeWalt tool bag. Fenders from eBay. Controller and throttle sealed with silicone sealant. PowerLED headlight from Sigma, very bright.

I used 48v lifepo for less than 300 miles on bd36. I started with new brushes. result: brush wear is 10 times
faster than under normal 36v usage. 1 of the new brushes has 1/3" left after maybe 250 miles. I didn't run it too hard. I'm 175lbs. 1 magent came loose. used epoxy to fix it. plastic brush holder had burn hole near brush.
I repaired motor and changed brushes. I'm only using 36v henceforth.

We kits are great, a bargan compared to others. Some suggestions:
use two 24 volt power supply chargers for 48 volt. I upped an old set up and found the 48 volt chargers are $75. I put two 24's in series, soldered the wires together and onto the RCA connector and have used that for over a year to charge 4- 48 v batteries. I considered wiring seperate connectors for 2 at 24 volt but took the risk and it worked with one wire / plug. They both are smart type that drop off when fully charged so have not eaten each other. Carry two chargers but the capacity is good and charges quick. 3 to 3 1/2 hours.
The other thing I always recomend is get the gold plated lug connectors and put larger wire size into the battery harness. The gold connectors work better / longer and don't oxidize like the others. Not so easy to find, so buy a box / dozzen.
I have toasted wires and now use larger gauge with thick insulation (meter wire) I have been using wire twist on lugs from 110 volt electrical as they are modular and can be removed unlike solder. I have worked industry for years and the difference is the electronic techs use solder, electricians avoid at all costs. High power melts solder and I find with large wires and currents of 48 volts the wire twist lugs work great, tape over with electrical tape to keep them secure through rough times.
Mount the controller in a bag or away from the wheels (not like WE says) The old boxes don't seal against water. The first time I got in the rain with a WE brushed controller it got wet and... went to full throttle. They could have put a 10 cent seal on the box lid but did not. Now it is in a small seat bag, open zipper and does not overheat.
Enjoy hot rodders!

Longevity update: So far, it seems that the biggest threat to running 48v on my BD36 has been loose magnets. Just fixed three that were loose, and will post elsewhere about that. I've got maybe 500 miles at 48v, had maybe 50 at 36v before that. The brushes seemed to be about 3/4" remaining, and I doubt that they started at more than an inch. I usually keep speed in the low 20's (top speed about 30mph on flat). I put some extra epoxy on the magnets, so I'm hoping that they won't come loose again.

Has anyone bought kit's like these or know of where I can find reviews?

I'm thinking of this as an upgrade from my BD-36.

rhfritz, you would have to ask the vendor about the brand name of that kit. I'm pretty sure it's not a wilderness, aotema or 9 Continents because the price is pretty low. possibly a golden motors or like quality. It's definitely an upgrade to move to brushless and 1000w. You will probably need a torque arm if it's not included.
I currently have the Aotema brushless sensorless type.

FYI, for any of you still out there. I had to quit riding my BD36 kit bike when I needed to drive my kids to elementary school. CPS would not have approved of them riding on my handle bars, ebike or not. But now that they're both in high school and the older one is driving the younger, I bought one of these https://www.juicedbikes.com/products/crosscurrentx last November and have nearly 1400 commuting miles on it. In "Sport" mode (configured via the head-unit), it'll go over 30mph. But it can sustain me at 28mph for the entire length of my commute. The pre-built ebike market has matured since we all built ours from kits a decade ago. All the major OEM's have them now, Specialized, Trek, etc. And the battery tech has gotten better and smaller.
The 52v pack on the CrossCurrentX is 18 pounds versus the 4 x 10lb SLA's I used to carry. And for my commute, I can keep the charge at 80% and still do a round-trip without having to recharge at work. And I use this awesome charger: https://www.amazon.com/Cycle-Satiator-Programmable-Electric-Battery/dp/B00VB2BXGG

I've now disassembled my old BD36 and am selling the parts on eBay if any of you still have a working unit. My wheel's magnets came unglued internally so it quit spinning freely. But I'm sure the brushes are fine. The controller is good. And I'm also getting selling both my 36v and 48v chargers. You'll find the ebike items among the Auctions here: https://www.ebay.com/sch/rhfritz/m.html?item=323946115291&rt=nc&_trksid=p2047675.l2562

Best wishes to all. It's been a fun ride.