For the cars and trucks crammed together on the elevated highway cutting through downtown, it's a slow crawl. On the smaller roads below, traffic is rolling at a steady 10 to 15 kilometers per hour in what looks like a more traditional Chinese street scene. Vying with the cars and trucks for the same strip of pavement are a motley assortment of two- and three-wheeled vehicles—everything from simple steel-frame bikes and heavily laden pedal-powered carts to motorized scooters.

Hidden within this stream is an entirely novel, homegrown class of commuter vehicle: electric bikes and scooters. There are an estimated 1 million electric two-wheelers on Shanghai's streets; yet to the Western observer it is only what's missing that gives them away. Some look like scooters, but they have no tailpipe spewing exhaust, no sputtering engine. Some look like fanciful bicycles, but their pedals are oddly still as riders relax and let the battery-powered electric motor whisk them to work.

For all the talk of China's growing infatuation with automobiles, the world's most populous nation continues to roll primarily on two wheels—and, increasingly, an electric motor drives them. The China Bicycle Association, a government-chartered industry group in Beijing, estimates that last year manufacturers sold 7.5 million electric bikes nationwide—nearly double the sales in 2003—and they are likely to ship more than 10 million this year. That's three times as many as the most optimistic projections for auto sales in China.

There's a powerful desire for motorized personal transportation in China as its cities sprawl. The electric bicycle is an attractive option for commuters, service people, and couriers [see photo, "Pizza! Pizza!"]. At 1500 to 3000 yuan (US $180 to $360), an electric bike is buyable at a small fraction of the cost of an automobile. It is also exhilarating. Hop on and crank the throttle, and an electric motor built into the hub propels you to speeds of 20 km/h or more.

Despite the obvious appeal of electric bikes, some Chinese cities have banned them altogether, alleging environmental drawbacks and concerns about public safety. But that hasn't stopped millions from buying electric two-wheelers in China—an astonishing development for advocates who have struggled for a decade to build a market for electric bikes in the United States and Europe. 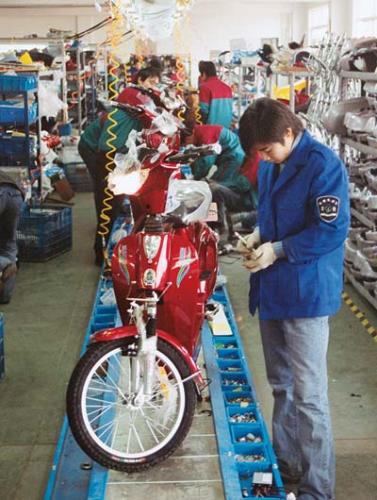 Coming Off the Line:: A worker inspects an electric bicycle just assembled at the Luyuan EV factory in Jinhua. 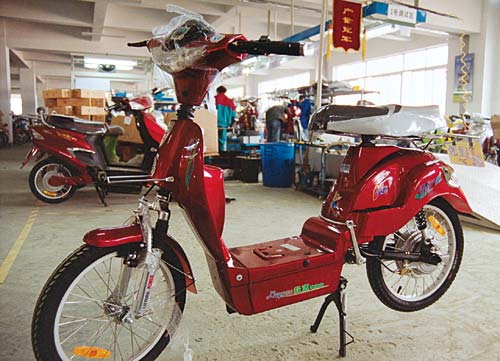 The Basic Bike:: The electric motor is in the rear wheel hub, and the removable battery is in the platform between the wheels. The electronic controller is between the handles.

Low and behold the e-scoot in the background has an X-treme scooters decal on it. Possibly the China release of the XB-500

`I believe that's a Luyuna, they all look alike, because they get there bodies from basically the same mfg.
The X-treme I saw, doesn't look like a Luyuna, I don't know who makes the X-treme.

Luyuan is one of the largest e-bike manufacturers in China.