I took my scooter out on the open road for the first time today. I was pleased with its performance.
It maintained a top end of 55kph/35mph and was not affected much by the head-wind. No severe inclines on this route so I don't know how that would affected performance. I only road about 10k/6.25miles but the battery was not particularly depleted. I still got areading of 40V on the meter.

Anyone know where to buy a replacement throttle assembly for an EVT America R-30 Scooter? Lots of throttles out there, but they are all for a 7/8" OD handlebar... mine is 1" OD. Help Please! I miss my scooter!

While trying to figure out why my battery pack wouldn't charge, I opened up the cases that hold two 12V cells each. I discovered that the cheap plastic dividers that were supposed to separate the top and bottom cells were completely smash so the top battey was sitting right down on the leads from the bottom battery. It didn't look good to me so I made a separator out a piece og 3/8" ply, 3"X3" and taped to the tops of the bottom bateries so the leads were not in contact with the batteries above. I don't know if it made any real difference but it's something that you might want to try.

For all you BE500 owners who are complaining about lack of power. I'm not trying to brag and I have no idea how to "soup up" one of these bikes. Once I got my battery properly charged, I'm now scooting along at 25mph/40kph. I only weigh about 150lbs but I'm not losing too much speed on the grades either. So take comfort. There is hope for these bikes afterall.

Mark,
I had to go get myself a voltmeter in order to repond to your question. I have checked the battery pack just as the charger shuts down and it shows 45-50V. I guess that's about right. It seems to be consistent in that range.

I discovered that a lot of people have had trouble with the BE 500 charger not turning off with the result that the batteries got fried.
Mine wouldn't turn off either. I know nothing about electronics but took the cover off the charger to take a look. I discovered two little phillips screw heads. I thought they must adjust something. I fiddled with them and discovered that by turning one of them slightly, I could get the charger to shut off. Maybe an answer.< 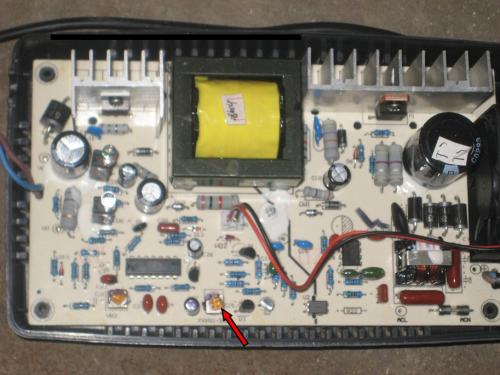 Just purchased a Baja Motorsports BE 500. I have noticed a lot of complaints about charging the batteries. I discovered, after trying unsuccessfully to recharge mine, that there is a Canadian version of the owners' manual onlne. It is almost identicle to the US version but it says,"make sure the MASTER SWITCH is turned ON when charging". This is the reverse of what it says in my manual. I tried it and the batteries immediately started to charge. Just thought I'd pass that on. I don't know how that important detail was overlooked. I hope it helps you out.

WANTED: Peddles and peddle arms for electric scooter E-mail SILVERFL39 [at] YAHOO.COM What does 408 mean? And has anybody added 2 more batteries to a 48volt system without any other mods for a total of 72volts? My controller says 600wats can it handle it? My batts. are 4 12volt 12 amphr. Or should I add 2 12volt 7amphr batts? Please help

I am interested in attending your training course on building my EV for personal use.However because I came across your site only tonight (app2330 hours)I'm unable to attend your September programme in 2011. I live in Trinidad and Tobago in the West Indies,and plan to travel to New York in July 2012 .While there, I will then make arrangements to get to the area,in order to attend your training course in 2012 . Can you give me the dates and locations that you expect to schedule your course ,so I can make arrangements to attend one?.

Topics:
building EV for personal use and starting an awareness of EV in Trinidad.and Tobago.
before comments

the casing on my motor is stamped 48volts, my controller says it directs 21 volts to the motor, how can I direct additional voltage and amprage directly to the motor bypassing the controller on an on and off switch where I can use it for times extra power is needed such as going up hills, I would want protection for my motor but I am not adverse to rewinding my motor in a different configeration if it helps to keep it together.