Hello. I'm new to the forum and to EV bikes.

A few weeks ago I put together a Schwinn with a Rear Drive Crystalyte 4012/408 double tap on a 700c running 48v. Its an Amazing motor!

But I have a couple problems with the setup. First it the battery mount. Its heavy duty aluminum, but after 200 miles, its toast. the sides collaps under the weight of the battery if I travel down rough roads, or sidewalks, and even short trips across soccer fields or unpaved footpaths will cause it to drop down onto the back wheel. Has anyone experianced this, or found a solution?

I'm also searching for a solution for the selector switch between the motor modes. In order to avoid law enforcement entanglements (its legal, but being pulled over is a nusance) I have the conroller and wires esentualy hidden on the carrier with the battery. That means reaching behind me, a few inches from the tire, and feeling for the switch. Anyone have an idea for a remot way to activate this switch?

For the batteries, I recommend a basket. I bought my kit from ElectricRider.com and they shipped the batteries in a big nylon pack along with a basket the pack is supposed to be placed in. It works very well so far. Scroll down to the very bottom of this page to see a picture.

By the way, "heavy-duty aluminum" is an oxymoron.

I went and took a look at one of those. The local bike shop called it a Panier basket. Their's was steel, but only rated for 30 pounds, and it sticks out to far for use on a mountian bike. The guy there said they're are also some wind resistance problems with them, if I'm going to be riding above 10mph. Something like 20% more frontal area vs. essentualy zero for something behind the seat. What he showed me was exactly what I had. I quoted you when he described it as being hevy duty. Got a good laugh out of him.

I guess I'm out of luck for buying something, looks like an excuse to fire up the welder. I wonder if there is a market for these?

Have you seen the XtraCycle gizmo? I have one Stretch bicycle ... the biggest cargo I carry with it is groceries, and it holds four bags of them real fine.

As for holding batteries, have you thought about ones that have a higher density of power per pound of battery? Such as NiMH or Lithium...? On the stretch bicycle I'm using a pair of DeWalt packs (33 volt 4.6 AH). They're so completely light it's not funny.

If you buy four Dewalt 36 volt batteries off ebay you could put together two 72 volt packs that weigh practically nothing and charge up in 30-40 minutes. I am planning to upgrade to 72 volts using the same motor (4012/408) as you and would love to hear your opinions on your set up. I would also like to know of a good place to buy the motor and controller.

Well, as far as the 408/4012 goes, I love it. Mine's the rear drive, and after running it, I would never want a front drive. At 48V, I get 22mph/16mph reliably at full speed with my 40c knobby hybrid mountianbike like tires and 700c rims. The 4012 pulls just over 6 amps at 16mph, the 408 pulls over 12. It makes almost no noise, except when accelerating at full power with the 408, which gets some motor hum, but even that is masked by the sound of the chain and wheels. 300 miles in just a few weeks, and no problems.

I got mine through Poweridestore.com. They seem to be the only sorce of of the 408/4012s.

As for the battery, you may want to check your needs. 4 dewalt packs is only 290 watt hours of total power. they are actualy 33 volt nominal batterys, not 36v. thank Dewalt for some clever marketing. Its 10, A123 3.3 volt cells at 2.2 amps. 36v is near there peak charge volt, like a 48volt SLA pack is actualy near 60volts at peek. total amp hours and What hours is figured from the nominal voltage.
I'm running with 480 Watt Hours and its not quite enough. 6 packs would get you 435 watt hours. 8 packs, 580.

I was hoping you would get back to me. As part of my upgrade from my 36/33 volt rig, I was going to add two more Dewalt packs for a total of six. The four Dewalt packs I have been using had much more range than the three 8 amp-hour (total of 384 watt-hour) lead acids I was using even though, in theory, they have less watt hours. I think it is because the voltage stays so flat for 90% of the discharge cycle whereas the voltage dropped with the lead acids and the bike just got slower and slower. Lugging the extra weight around probably hurt the range as well. The lead acids gave me more power at first but less range. The Dewalts are less powerful but put the same power out for the whole ride.

So, I will be using six Dewalt packs, at about 66 volts. That should be plenty of power and range for me, especially if I don't abuse the acceleration and speed thing. I was thinking of a rear drive also and also have 700c wheels. I was advised that a 20 amp controller may burn out because at 66 volts I might exceed 20 amps on occasion and that I should get a 2.9 pound 35 amp controller. I was told that a 20 amp fuse would not be fast enough to protect the diodes in the cotroller. Your thoughts?

Did you get any ideas for hiding your switch? Seems to me you can just move it to a discreet place up front.

How does the 408 feel on hills?
Are you using a 20 amp controller?
If so, which controller is it and did you get it from the same place as your wheels?
Do you know your max amperage when accelerating from full stop?

The following is an email I got from a guy on this subject:

There are probably a few rounding errors on some of these numbers but I don't believe any of them are too far off.

The good news. It appears that I am able to make a five or six mile run with no problems as long as I don't overstress the packs.

Actualy, I've got a Wattsup meter, and keep tabs on some of that. its only good to 60 volts, though. I'm running the 20 amp controller. it has a cutoff that shuts it down if it goes over 20 amps. While I can't confirm this with documintation, it seems to have a ramped cutoff, too. I've hit 19.95 amps on the meter almost every time I go out but never gone over, and never felt it cut out. it seems to hit this point and hold. a 35 amp would probably give me better acceleration and climb, but I don't see the need. that amperage is on the 408. its rare for the 4012 to pull over 12. You going to higher voltage should hit the limit less, as you'll be pulling higher wattage for fewer amps.

The 408 is decent on hills. Take that with a grain of salt, though. I live in Texas. Most of the time I lose less than 1mph on hills. I lose 2-3 mph when driving into 20mph winds, so hills don't amount to much.
Oddly, the 4012 does loose some speed on hills. Seems weird, but the 4012 draws less wattage, so it has to drop further before it has enough load on it to puill the amps.

As for my switch, its still in the back over the tire. I'm working on some form of cable shifter for it. Partly to keep it hidden back there, and partly to keep the motor and battery wires short.

Sounds like I'd better go with the 35 amp. Also, your batteries are close to 60 volts when first charged. That is not too far off from what mine will be. You don't sound too impressed with the hill climbing of the 408. Do you see a big difference between the two motors on level ground?

Well, I'm not unimpressed either. the 408 on a 700c is roughly equivilent to the 407 on a 26inch. Its built for speed, not hills. It usualy only drops speed by a small margin doing things like climbing over highway overpasses.

On level ground, there is a diffrence. By the numbers, the 408 is only 6 mph faster on my bike, but at 16mph you don't feel the wind much, at 22mph it feels twice as fast. Its very noticable. Really the best way to describe the diffrence is shifting between high and low gears.

I built a stick-shift that runs along the center part of the bike. It starts in the rear where it connects with the controller and goes up to the handlebars.

Here's a picture of it. 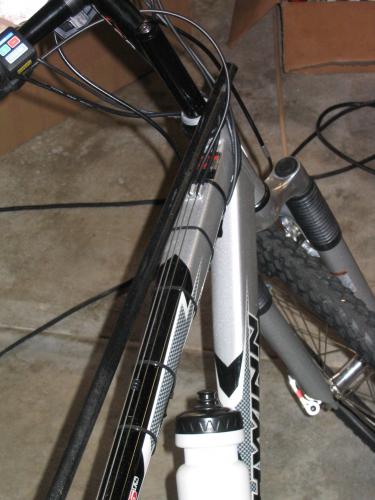 I'd post a video of it in action, but I've decided to just use the 408 portion, in combination with a 35 amp controller with some of those new sweet 36 volt Dewalt batteries.

Anyway, here's a quick series of photos that show how I mounted and waterproofed the controller (live in Seattle), and then hooked the stick-shift to it. Sorry for the ones that are blurry, but it should still get the idea across.

1st, grab some aluminum sheeting like used for ducts, etc from Lowe's. $3.00 or so is what it cost me. I used aluminum so that it could easily conduct heat - yet provide additional protection.

Also grab some foil tape (high temperature) so that you can easily arrange the shape. 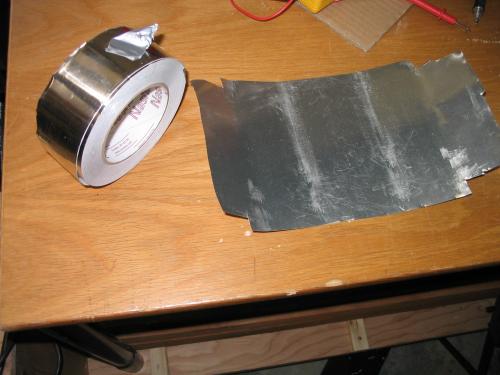 2nd, get the shape right. 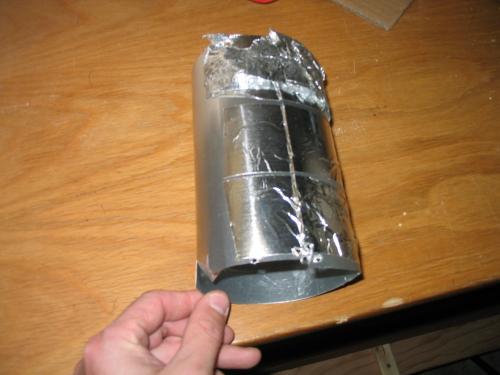 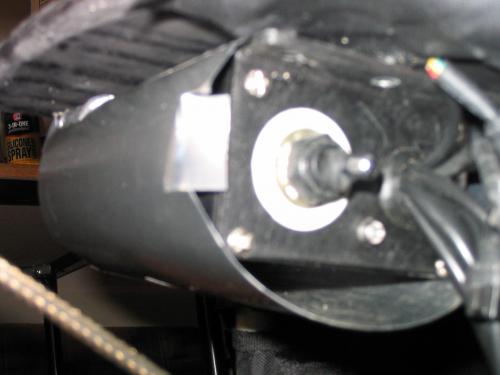 4th, after painting the dowel black (or whatever color that matches your bike), then drill a hole that will fit the toggle switch on the controller. You want it to just fit. I also found that there are some cheap toggle rubber covers you can buy at Lowe's in the electrical section. 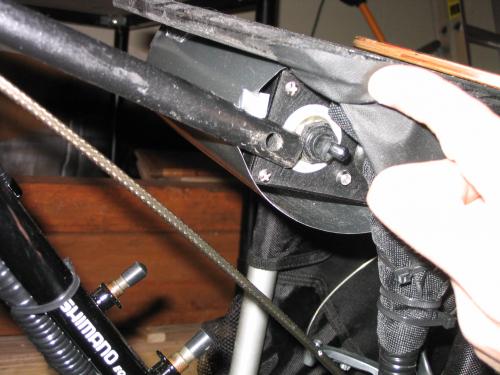 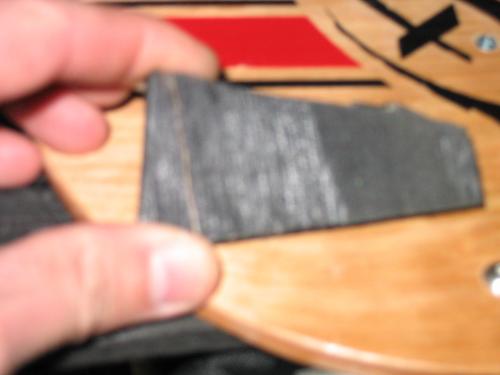 And here it is attached: 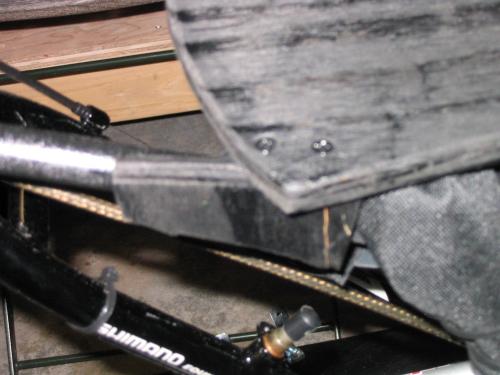 6th and finally, fabric stores sell neoprene or at least water-resistant material. Cut it and use it to cover the holes on the sides of the tube. 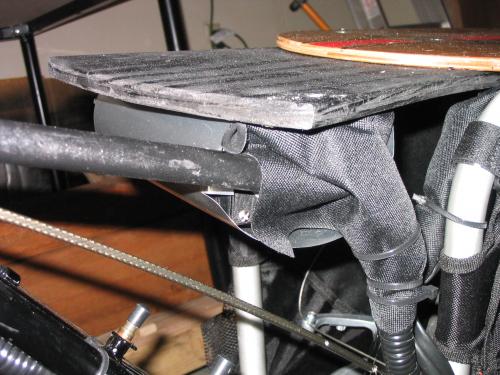 It worked really, really well, and since the whole bike was black and silver, you really couldn't tell that the shifter was there (the upclose shots with flash made it look more obvious than it was).

Question , how do you hookup up the dewalt batteries and not drain the batteries too far?