Well, I spent last weekend building the ultimate electric hybrid bicycle for Seattle riding. My first bike was more or less a prototype that taught me all I needed to know to put this one together.

Note how similar this bike looks to the $7,000 bike featured in a recent New York Times article. Similar design parameters usually lead to similar designs. That is why most airliners have two wings, engines mounted on pylons under those wings, and three tail feathers. However, this bike only cost $1,600 and I suspect it will outperform the expensive one in every way imaginable.

I chose a full-suspension mountain bike frame because the roads and even the bike trails here are so bad. I wanted to isolate the batteries, controller and my butt from the shocks. I also jump off curbs a lot.

I wired pairs of 36-volt Dewalt power tool batteries in series to get 72 volts and then wired each of these pairs in parallel. I can carry two, four, or six battery packs, depending on how long the trip will be.

I replaced my 36-volt, ten-amp controller with a 72-volt, 35-amp version. It also has immediate start, which means the controller does not wait until the wheel is rolling before it puts power to the motor. This lets me get through intersections faster and safer (although I have to be careful or my front wheel lifts off the ground).

I used a rear wheel motor because front wheels here tend to get bent by potholes and fixing one can be expensive if you have a motor mounted in it.

By doubling the voltage I gave this bike twice the power of my first one. That is a 100 percent increase in torque and speed. It is an incredible machine -- efficient, fast, carbon neutral, and flexible.

I will post video of the bike in action when I get around to it.

Will you post some pictures of the inner workings of you battery pack? I like the plug and play capabilities you've set up there.

What kind of range are you getting and how does she climb? Looks like you really got your money's worth there.

I'll be posting more video. I'll include close ups of the battery mounting hardware. I will also post video of this bike pulling a kid trailer while blowing past sprinting spadexed racers (spandexters).

Range totally depends on how hard you use the throttle. I bring the chargers along for really long rides and top the batteries at the nearest fast food restaurant. I have taken numerous 15 mile rides using four batteries without recharge. For short trips I open it up because range is not a concern. With six batteries the thing wears me out. It does really well on hills but you have to pedal. You also want to take hills at a pretty fast clip. The motor seems to perform better on hills with a little extra RPM. I need a higher gear because I can't pedal fast enough to keep up with the motor when the throttle is wide open.

Where did you get this Mongoose from? I'd like to go check it out. Didn't know those brakes came in such a low priced model.

Also, any concerns about most of the weight being more in the back of the bike(you, motor, battery pack)?

I'd like to see how you wired the dewalts. Perhaps post a description/pix of that when you get a chance. Thanks.

` :)
Russ,
Can you give us some additional information, cost, specs etc?
I noticed this one starts off a little different.

I will eventually post costs, sources, specs and wiring diagrams on a web page that you can link to from here. It will be easier to just build a website and upload it to my server than to try to put all that info here. I'm also thinking of putting the batteries in their chargers and putting them all together in a panier so you can just plug the bike into a wall rather than put the batteries in chargers. This will mean carrying the chargers around with me and putting a plug in each battery to bypass the charger and BMS but it will probably be worth it not to have to take the batteries out everytime I want to charge.

I also realized that with this much electric power I can mount a scooter horn, turn signals and really bright flashing lights. A whole new world opens up for safety on a bike that until just now, was only available on scooters and motorcycles.

It went hella fast up a couple of pretty steep hills - I was stoked!

Thanks a million Russ! (just got my 35 amp controller and batteries, so going to test drive right now)

Hey Russ; I really like what I see of your work on this bike. I am new to this site but it looks as if you may not of put anything new up since 2007 unless Im missing something. I was wondering if there is any way you might have any kind of plans or parts available that you might have time to share or to sell. I love your cool battery design that uses the dewault power packs. I am a very ecology minded person and ride to work on a bike when ever possible when the weather permits. You may already have some things out pertaining to this cool project. Please contact me if you have the time to let me know if you may be available to assit me to build something close to your great unit. I will hope to hear from you if you have the time.
Thanks; Tim ( Thetoolman4376) My email address is "thetoolman625 [at] yahoo.com" Feell free to drop me a line if you have the time. Thanks again.

Hi Russ. I just got done building myself a Full Suspension Ebike. I bought the 600 watt BMC kit from Cycle9.com. They may be a little more expensive than others but they offer exceptional after purchase service options.
So I have a couple of questions for you.
Where did you get those fenders and what brand/ model are they? And I notice your controller is mounted underneath your rack. Your rack looks exactly like mine. I have a Delta Beam Porter with pannier supports. I am wondering how that works for you since you and I both live in the Pacific Northwest. I live in Oregon. I have an Infineon 35A controller with a 10AH lipo pack feeding my 600 watt motor. I currently have all the parts in the bag but would like to mount controller like you did but am very afraid of moisture problems. I have attached a picture of my build.

Thanks for your reply. Scott 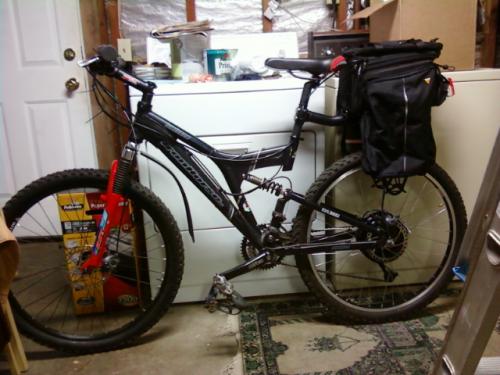