Al Gore’s Personal Energy Use Is His Own “Inconvenient Truth” Gore’s home uses more than 20 times the national average?

Last night, Al Gore’s global-warming documentary, An Inconvenient Truth, collected an Oscar for best documentary feature, but the Tennessee Center for Policy Research has found that Gore deserves a gold statue for hypocrisy.

Gore’s mansion, located in the posh Belle Meade area of Nashville, consumes more electricity every month than the average American household uses in an entire year, according to the Nashville Electric Service (NES).

In his documentary, the former Vice President calls on Americans to conserve energy by reducing electricity consumption at home.

The average household in America consumes 10,656 kilowatt-hours (kWh) per year, according to the Department of Energy. In 2006, Gore devoured nearly 221,000 kWh—more than 20 times the national average.

Last August alone, Gore burned through 22,619 kWh—guzzling more than twice the electricity in one month than an average American family uses in an entire year. As a result of his energy consumption, Gore’s average monthly electric bill topped $1,359.

Gore’s extravagant energy use does not stop at his electric bill. Natural gas bills for Gore’s mansion and guest house averaged $1,080 per month last year.

“As the spokesman of choice for the global warming movement, Al Gore has to be willing to walk the walk, not just talk the talk, when it comes to home energy use,” said Tennessee Center for Policy Research President Drew Johnson.

In total, Gore paid nearly $30,000 in combined electricity and natural gas bills for his Nashville estate in 2006.

On my own site I've got a posting about this, An inconvenient comparison of two homes, pointing to an article where someone compared Al Gore's home with GW Bush's "ranch" in Crawford Texas. Bush's ranch is a model of sustainable and green technologies, whereas Gore's home is a typical monster house with monster electricity use.

But .. yesterday I found a blog posting discussing how Gore is moving forward with plans for solar panels to help power his mansion. It includes a picture of a lawn sign saying he's filed for a Conditional Use Permit to install Solar Panels.

A conditional use permit is filed when zoning laws do not allow a certain usage, but the owner of the property wants to do it anyway and feels their neighbors will agree. So this tells me that Al Gore's neighborhood isn't zoned for solar panels. By comparison GW Bush's ranch is out in the sticks and probably doesn't have zoning laws in the first place.

Finally I find this article curious in a political slam-job sort of way. Sure, it's true that monster houses have monster electrical budgets. It just seems these slam job articles circulate about people that the corporate masters want to bring into line, who stray out of the norm ... why aren't those same articles also slamming all the other monster homes that have monster electrical budgets? Why aren't there articles slamming the other wasteful uses of energy/electricity/oil/etc that go on? Why is it Gore getting this attention?

Politicians are the elite in our society. Unfortunately their lust for money and power drives their actions. They talk down to us lowly subjects as if we are morons. The green speech by Gore regardless of motivation and his party affiliation is one step towards the right direction. When our politicians are driven by urges (the need to secure money and power) like monkeys following their animal urges, it provides endless amusement for this moron :D . It's very amusing to watch that monkey back pedal to follow his own sage advise. These comic routines are endless...... :)

`Thanks for the update.
It seems he would have done this before he did the Movie. Don't ask others to do what you haven't done. 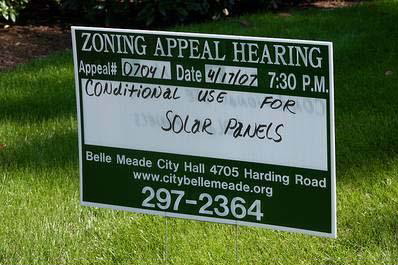 I believe, An Inconvenient Truth was released 24 January 2006 at the Sundance Film Festival, and seems he waited more than a year to make changes to his own home.
BTW, the program I was talking to you about that I use to attend was Family Re-Union and not connected to Global Warming.

I saw your Governor Arnold Shriver, I mean Schwarzenegger, on the Charlie Rose show the other night. Seems he is suppose to use a Hydrogen Hummer.
Schwarzenegger+Hummer+Green???

Arnie tanking up. (although he apparently drove back from the airport in a normal gas-guzzler).

..and the hydrogen that Schwarzenegger burns came from oil or gas and making that hydrogen emitted as much CO2 as a hummer burning gasoline.

But, with regard to Gore and even the "Step it up" guy Mckibben, it is important that we practice what we preach. Sorry to sound like a radical, but but if a 1200 sq ft house is good enough for me, it should be good enough for Al Gore. And, McKibben lives in a big house in the Adirondaks and drives 60 miles each way to Burlington every day.

How did you get a picture of Al Gore's lawn sign? Anyways, great picture.

About our Governaaa Shriver. He already has lots of money. He might just do the right thing. Only time can tell.

`How did you get a picture of Al Gore's lawn sign?
Ecotality Gets Drudged When Gore Goes Green
Sign seen in front of Al Gore's mansion in the posh Belle Meade section of Nashville Thursday, indicating Gore is moving forward with plans for solar panels to help power his mansion.

from usa today 12/2006
"Public records reveal that as Gore lectures Americans on excessive consumption, he and his wife Tipper live in two properties: a 10,000-square-foot, 20-room, eight-bathroom home in Nashville, and a 4,000-square-foot home in Arlington, Va. (He also has a third home in Carthage, Tenn.) For someone rallying the planet to pursue a path of extreme personal sacrifice, Gore requires little from himself. "
from abc news 2/2007
"...the former vice president's 20-room home and pool house devoured nearly 221,000 kilowatt-hours in 2006, more than 20 times the national average of 10,656 kilowatt-hours."

It seems that he stoped the zinc mining on his property in 2003.
Also buys 100 percent green power, and bought some fluorescent bulbs.
And about the green power, a company he cofounded pays for the green power, in which the company was founded in 2004, just in time for the movie.
http://www.foxnews.com/story/0,2933,257958,00.html
But if he is the best we have, what are you gunna do.

And he just got his conditional use permit:
http://www.cnn.com/2007/US/04/18/gore.home.improvement.ap/index.html

The article mentions his house is run on power generated from a variety of green resources. I believe what that means is he's arranged to buy power from "green" providers. In California we used to have choice of electricity providers .. while you could not gaurantee the electrons you used came from the green provider, what was gauranteed is that the green provider inserted electrons into the system that matched the ones you used. I used to use Green Mountain for electricity.

why aren't those same articles also slamming all the other monster homes that have monster electrical budgets? Why aren't there articles slamming the other wasteful uses of energy/electricity/oil/etc that go on? Why is it Gore getting this attention?

Gore's actions speak louder than words. As General Paton said "Its what we do, not what we say that will destroy us", or something like that.

Loyalty goes both ways, from bottom up and from top down. You can't lead by following.

---
Avatar taken from http://www.electricmotorbike.org/
Anyone got one they might want to sell?
My KZ750 Project: here E.T.A. 1 mo

I've seen this and other criticisms of Gore. Someone even left a copy on my chair at work, anonymously of course. It is always easier to attack the messenger than the message. I think this is why the media has a feeding frenzy whenever a popular preacher is exposed as human. Just because the guy is a hypocrite doesn't make what he's saying any less meaningful. Or more meaningful, for that matter.

This discussion would be a lot easier to have if it was split into global warming and can we / should we do anything about it, good role models for eco-friendly behavior, and good spokesmen for eco-friendly behavior. Personally the first is the best fit for this forum. The second are people you have never heard of or are likely to. Chances are there are a few lurking around here, though. The last is a little boring and frankly I've bought the message and don't need to hear it any more. We could trash the spokespeople left and right and it wouldn't do anything to change the reality or non-reality of global warming.
--
Full time ebiker
BionX and Wilderness Energy

The above statement is one of the few things that I see in this thread that actually has anything to do with "Environment and Climate Change".

It seems that most of the other posts here are related to "Politics", would that not be a better Forum for this thread?

` :?
Well it started out ok, but seems like the Worm slowly started turning. Maybe there is more Politics in Global Warming the Global Warming in Politics?
We're really stretching the Forum by even discussing Global Warming, and to start one on Politics would probably get out of control. We try to stay within our current Mission Statement as close as possible.

FWIW, starting next month, July 2007, we really really really really need to finally wrap up our Mission Statement, so we can move to the next step of our V is for Voltage Community Building before we can even begin any type Incorporation.

I really agree with you on this. ;)

My only point in saying anything here was to direct the thread over to the already existing Politics Forum.

I'll have to agree that Global Warming is Political in Nature (pun intended). :)

` :?
Al Gore is on Oprah, probably a rerun, he sure is well versed or well rehearsed, well he is a Politician.
Anyone hear any updates on his own personal Home Energy use?