This event was sponsored by the original V is for Voltage ... I originally posted this on 7gen.com (my personal blog), on May 1, 2003, but the event report truly belongs on this site.

In the Spring of 2003 a group of personal EV enthusiasts got together for a fun day of trying out their EV's in the most challenging of situation: uphill. One of the tougher challenges an EV faces is the sustained poer delivery required to travel uphill. The steeper the hill, the longer the hill, the tougher the challenge. Obviously this isn't beyond the capacity of an electric drive system in general, as the deisel-electric locomotives prove every day. It's when you limit the entire power capacity of the vehicle to what can be carried on board, coupled with the limits of battery technology, that it gets dicey. Again, it appears to be simply a matter of designing the vehicle with enough power capacity to satisfy the requirements.

The setting: A beautiful day in the Marin Headlands (this being the very steep and mountainous hills just to the north of the Golden Gate Bridge). We had an agreement with the National Park Service to use the road going uphill from a parking lot. We had about a mile of very steep road to climb, a fairly flat section of road near the parking lot in which to play, a parking lot in which to congregate, and a great time with wonderful camaraderie amongst people sharing a passion for electric vehicles. 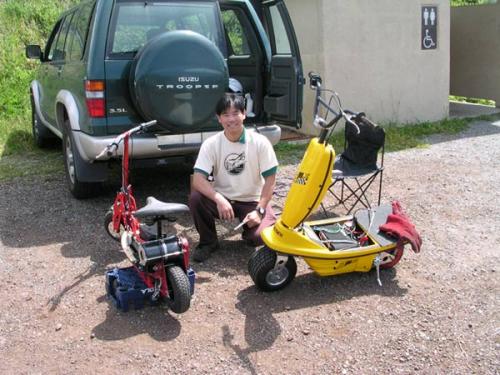 This is deafscooter, a.k.a. Craig Uyeda. He builds some awesome electric scooters, often tearing apart the motors and replacing the guts with super secret high powered components (such as rare earth magnets). His scooters have been clocked at up to 70 miles/hour speed. By the way, he is deaf. 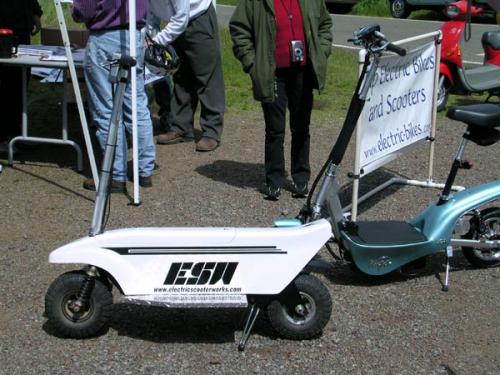 Electric Scooter Works (formerly at electricscooterworks.com) and the Vego 600sx (formerly at govego.com). Both showed pretty well, with ESW having the better uphill performance. ([UPDATE September 2005]: Vego has since gone out of business, and the govego.com website is nonfunctional) 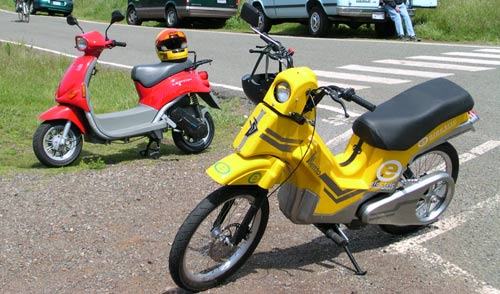 Both are commercially available, and solid and sturdy bikes. Both are in the "small motorcycle" category and did very well on the hills. 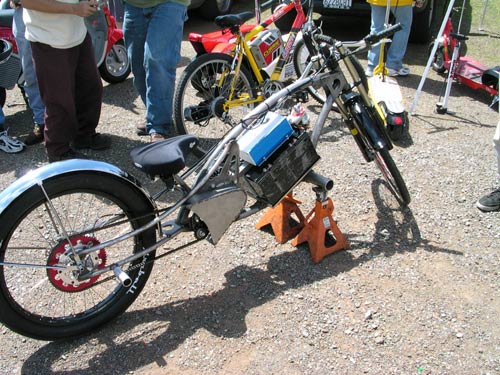 Custom built bike by Mike Mercado that won Best In Show. The visual effect is like a stretched out motorcycle, yet it's made from bicycle parts, and will go over 50 miles/hour. It did very well on the hills. 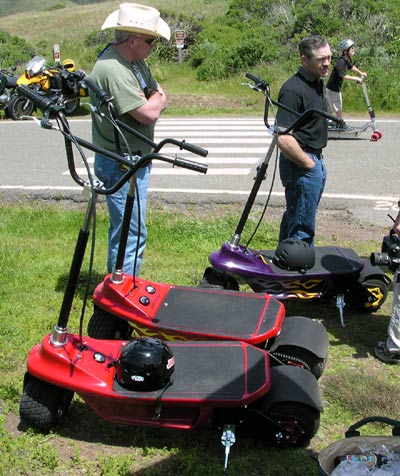 The Go Big scooters (formerly at gobigscooters.com). They are very over sized high powered scooters with awesome capabilities. The specifications say 36 volts, at a range of amp's up to 400 amps, and up to 14,000 watts (nearly 10 HP). The company owners were the ones attending, and what was most impressive is that to get to the event they had to ride 10 miles. Ten miles, and then they partook in the event. See, they arrived in an RV but the roads are hilly and narrow enough that RV's are not allowed to where the event was held. Everything about the Go Big scooters are oversized, or as they say "No corners have been cut or expenses spared in producing these scooters". The tires are wide enough they almost do not need a kickstand. 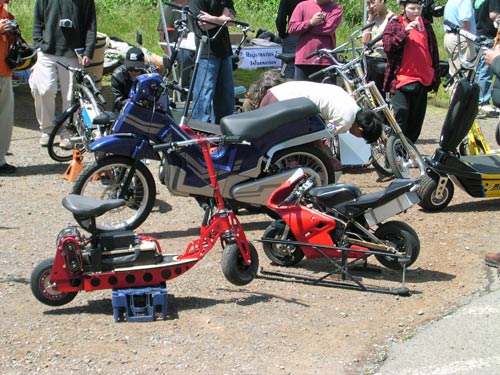 PEV heaven. To the left in the front is Craig Uyeda's Urban Express(?) monster scooter (see above), and in the back a variety of scooters. To the right is a "pocket bike" that's a miniatrized motorcycle, which has been converted to electric. It is perfectly functional, will carry a full grown human being, and goes quite fast. Just don't expect it to go very far. 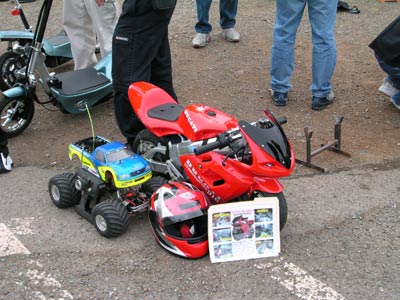 The pocket bike made a friend. Someone brought a toy RC truck (electric, of course) and the two hit it off very nicely indeed. They were last seen riding off into the sunset headed towards Las Vegas and a quick honeymoon.

More PEV's than you can shake a stick at. Front and center are a couple Badsey Racers (formerly at badseyscooters.com). To the far left is a Currie scooter. 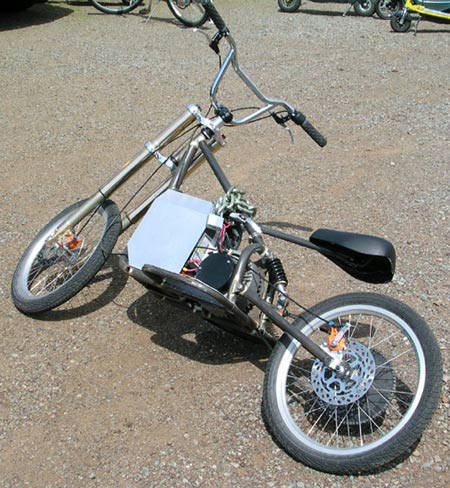 The Jackal, which was first sighted in public at this event (to my knowledge). Running at 48 volts, claimed top speed of 40 miles/hour and claimed range of 20-25 miles. Those who have these bikes love them, and they appear to be extremely solidly built. The construction is very open, with the motor, controller and battery only mildly protected from the elements. It also lacks a number of safety features like turn signals and headlights, and thus might not be registerable. Still, it looks to be a very fun and powerful bike. At the Antigravity race it did very well climbing the hills. 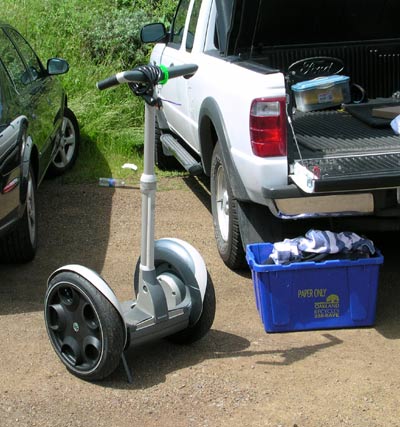 Someone brought a pair of Segway scooters (http://www.segway.com/). These were a big hit, though we couldn't help but doing price comparisons as most of the scooters present cost 1/10th what the Segway costs. Still, those that could handle the unique drive and steering mechanism were very interested and excited. I rode one for a couple minutes and came away enthralled and trying to figure out how to afford to buy one. Here's the deal; the computerized control system works by detecting where you're leaning. If you lean forward, the control system makes the Segway go foward, if you lean backwards it goes backward. Very simple and intuitive (for most), AND it can switch forward to backward with a momentary lean of your body. Plus, because the wheels are arranged as they are, you can easily spin in place. Truly a magical vehicle, and it made it up the hill pretty well. The two Segway's had a race ending up in an effective tie.