This is another event sponsored by the original V is for Voltage .. it was held the year following the first Antigravity EV expo, but in a different venue. 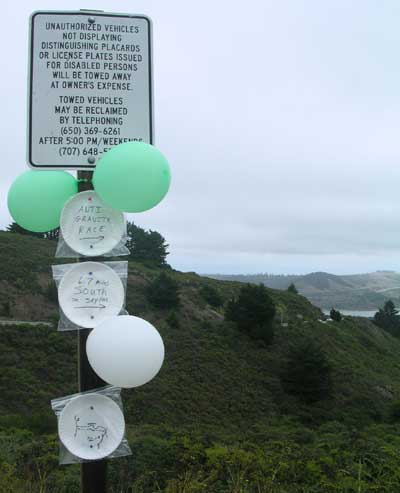 This years Anti-Gravity EV Expo was much more low key than in 2003. Rather than coordinated races, and having permission from the National Park Service Police, etc, we just met somewhere on the San Francisco Peninsula and had some fun.

This picture just kind of says it. We were told on the message board "go to the intersection of Skyline Blvd and Hwy 92, and follow the instructions there". And, so, there we were looking at some paper plates pointing out where the event would be held.

The great thing about living in the San Francisco Bay area is that we have tons of beautiful locations in which to have fun. The Peninsula is full of them, and for this event we again had a great place and a great time.

The low key nature of the day only added to the fun, and I wouldn't have had it any other way. At the same time I'm looking forward to what Ken has planned for next year, with events on a more massive scale meant to draw public attention to what we're doing.

It's all well and good to have some fun among ourselves, and at the same time there's a whole country full of people who need to know what these vehicles are capable of. With off-the-shelf electronics (well, in some cases, highly customized electronics) we can take a cheap electric scooter with wimpy performance, and turn it into a speed demon of awesome capability.

The location chosen by our fearless leader, Ken Trough, was an underused section of road in the mountainous Peninsula. As you see written on the paper plates to the left, it is 6-7 miles south of the intersection of Hwy 92 and Skyline Blvd. We did not use Skyline Blvd, but instead one of the roads leading from Skyline down to the coast.

The race course was the roadway itself heading upwards from a parking area, up to Skyline Blvd. The road was very twisty, in rugged terrain surrounded by heavy redwood forest. The day was overcast, and at the race course was slightly misty leaving a damp road. 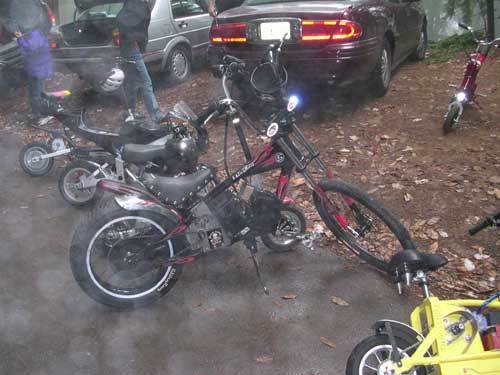 Here we see Ken Trough's beauty, and the mist. The light was dim enough that the camera wanted to cause the flash to go off, and then the flash simply lit up the mist as you see in this picture. For the following pictures I had the flash turned off. In any case, the bike shown here is a Schwinn bicycle done up kind of like a motorcycle, which Ken Trough has converted into electric drive. It no longer can pedal, and instead is pure electrically driven. The motor is a special design which Randy ('motobiker' on the V is for Voltage forums) has been working on for several years. Ken had serial# 1 of what was to be the commercial production of that motor, and this day was supposed to be its maiden voyage. Unfortunately when Ken road it up the road (racetrack) the motor burned up. So much for the beta test, eh? 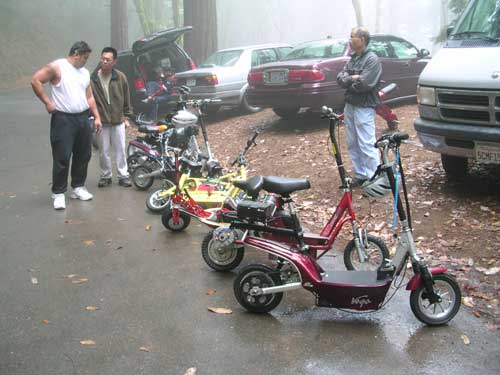 Here we have the vehicles lined up and ready to go, along with a few riders. I see two vego 600's, an HCF 707, two of Deafscooters behemoths, and at least one pocket bike in the background. 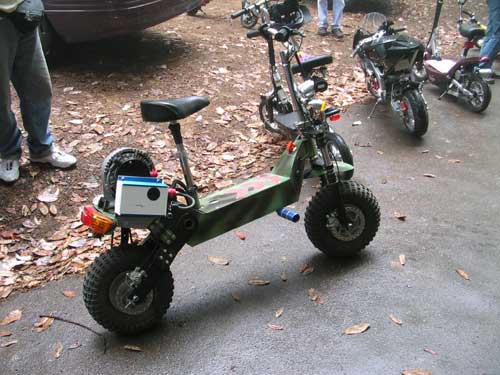 Here we have a vehicle named, at the event, the Mud-E-Jumper. This vehicle was built by Todd Kollin of Electric Motorsport, and is a "mud jumper" converted to electric. Normally these are gasoline driven, but here we have an e-Tek motor, an Alltrax controller, and some batteries buried somewhere. This vehicle has awesome power, as one would expect from the e-Tek. 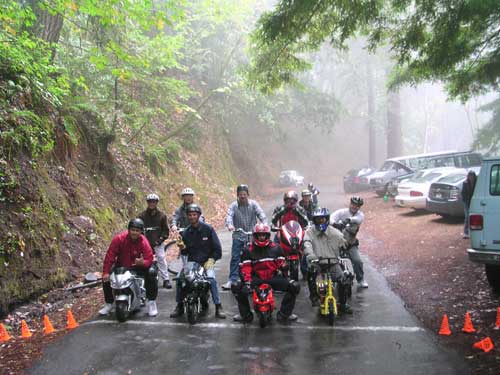 And here's the line-up. What a crew.

Notice how quickly the mist forms in the background. 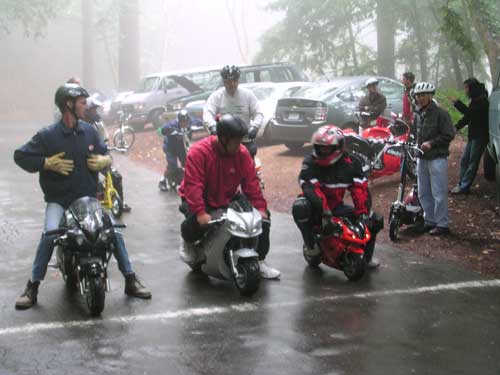 The lineup for the first race. The little red pocket bike is the one pictured from the 2003 antigravity rally. Its friend the micro-sized electric truck was nowhere to be seen. This pocket-bike was originally gasoline driven, and had been converted to electric using the electrical guts from the Rad2go e-36 scooter (36 volt 800 watt motor). The larger black pocket bike is run with an e-Tek, but at 24 volts. I don't remember the characteristics of the silver one.

We synchronized watches between Ken Trough and someone we'd sent up to the top of the hill. Each persons arrival time was written on a paper plate, as they arrived at the top, and by subtracting the times we got their elapsed time up the hill. 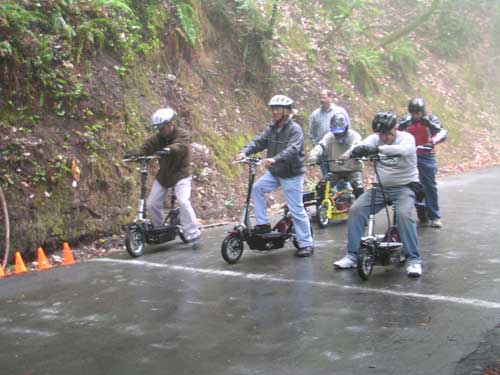 Next we have a lineup of modified Vego-600's. At the right is Lawrence Rhodes, and his Vego is named Gemini. It has two of the stock motors face-face, with two controllers each driven from the same throttle. He says he gets a few extra miles/hour speed this way. One of the others eschewed the stock motor, instead had a 1kw motor with a chain drive. 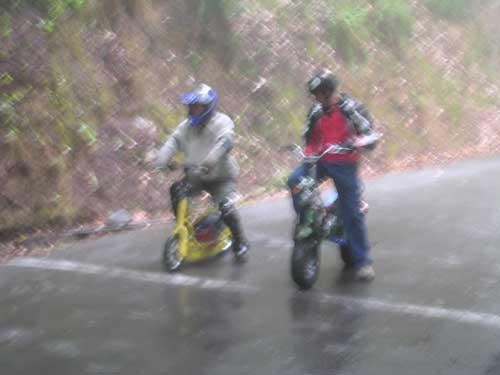 Next we have two over-powered monstrosities. I apologize for the shakiness, but as I said I'd turned off the flash. The light was dim enough that this meant long exposure, and sometimes if you're not careful you'll have shakes in the picture as we have here. Unfortunately this is the only picture of that lineup.

To the right is Todd Kollin on the mud-e-jumper, already talked about above. To the left is Deafscooter on one of his highly customized scooters. I believe this one started life as a Rad2go e36 but it may have been anything, and regardless of what it started life as it had become a truly Deafscooter creation. I got to ride this afterward the race, and it's wicked fast. I didn't even dare let the throttle all the way out. 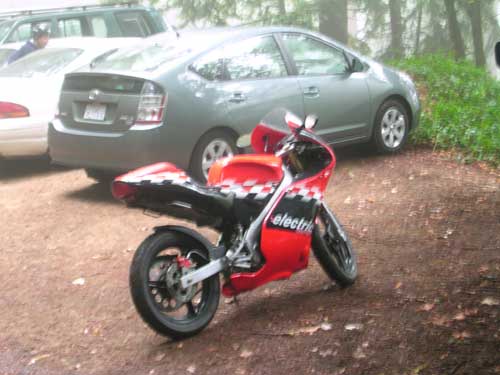 Here we have Todd's main creation. The Electric GPR. This is a full sized, street legal, drag race proven electric motorcycle. It is driven with an e-Tek motor using the Alltrax controller. 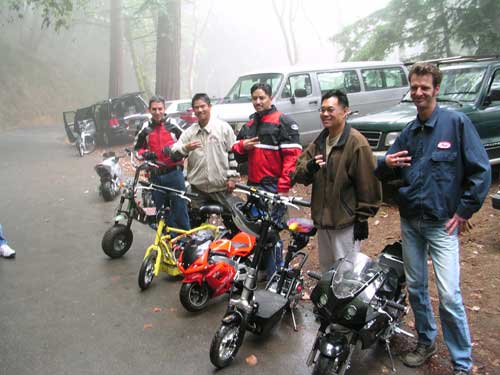 Post-race lineup. In honor of Deafscooter, they are showing the American Sign Language symbol for the letter E, for Electric. 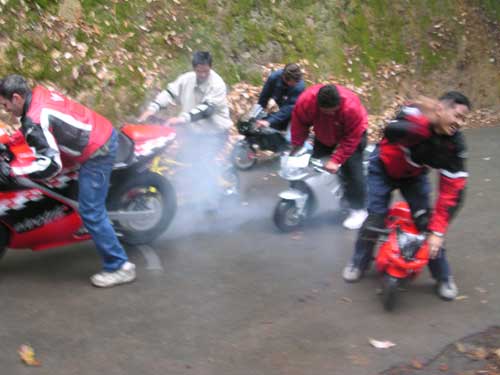 Todd, showing off. This burnoff was very impressive, and loud. 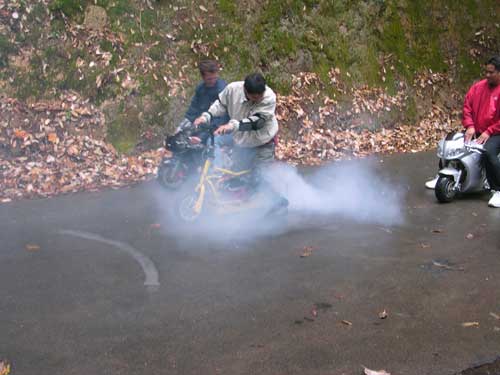 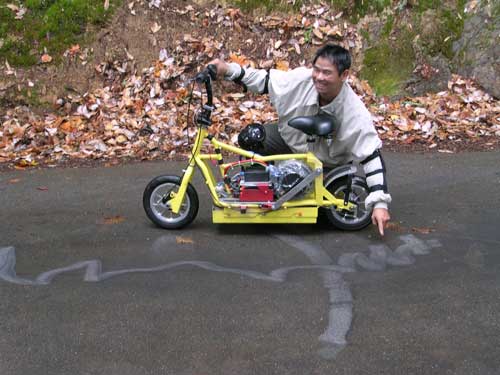 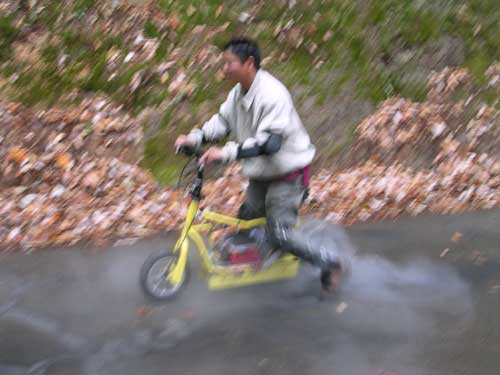 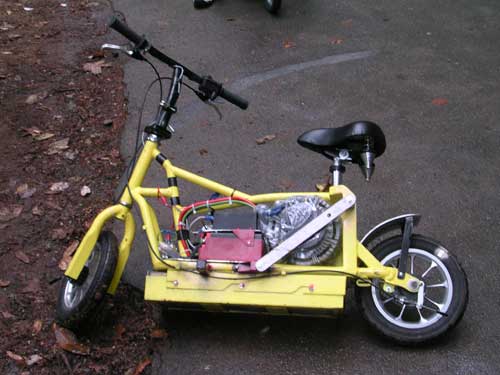 This is a closeup of deafscooters creation. Looks like an e-Tek motor. In this picture it looks like it originally was a Currie scooter, but has been highly modified.