Finding Nissan Leaf batteries is turning out to be a little challenging. I am persistent and will eventually find some.

My question for the group is, has anyone used others? I have seen the antiscab video from 2011 but seems like things must have evolved from there.

I found these on Battery Hookup and it would seem feasible although you would need to use quite a few in parallel to accomplish the necessary amp hours.

I have not tried those, nor heard of anyone doing it, but I have seen people use other battery packs. I think someone used a Chevy pack from a Bolt? Volt? I remember it was inexpensive at the time to get those packs, but if it's the Bolt, I would worry about fires.

My FAVORITE one is someone did a 3 pack of Tesla cells. Not actively cooled, but with the little energy that is drawn from them by the bike they won't get too hot, and with even a 6.6kW charger they won't either. I loved that I think they were getting more than 100 miles range. Plus the supply of Tesla packs hasn't dried up the way Nissan and Chevy packs seem to have.

Of course the Tesla pack needs SURGERY done to the pack, which is a bitch, while just buying a full Nissan pack and selling the unused cells could pay for the full pack.

Thanks for the feedback Randy.

Most Teslas use either 18650 or 21700 cells. I could go that route, it's just a lot of welding and I would need a lot of them in parallel to get to a reasonable range. I would prefer not to because a single bad cell is very painful to find and replace when they are all welded up.

I don't think there is welding, just cutting of the metal plates on the outside to change the voltage of the pack from 24v to the 150v we need for the bike. I am not sure how much a bad cell will bite you on a Tesla pack as there are so many in parallel that one gone bad will only affect going to the very bottom of the battery. It's pretty rare that I go there. And the Tesla packs are pretty good at maintaining their balance. Not sure if the BMS they have can be re-used on the Vectrix.

Thanks for your feedback. I would need to see what you are referring to. The Tesla packs I have seen are configured at 400v using 3.7v cells in series. They are massive trays that ride on the underside of the main cabin and would be too big for this purpose.

I think the Leaf batteries are probably the best route for now. I was hoping to find Gen2 for the range but may have to go with Gen1 as there seem to be more available.

Sorry if I was obtuse, the point is the modules are only 24v so to get to 400v you have to put a bunch of them together, but if you can only fit 3 into the belly of a Vectrix you need to split them into smaller packs that you can connect in series to make the 150v the bike runs on. The article is on this board on what was needed to cut the plates if people are interested.

No worries. Always looking to learn something new. I will check out the article. 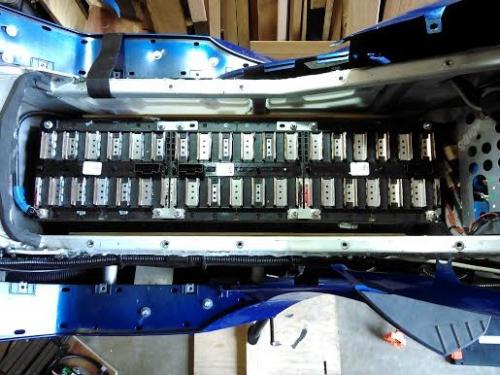 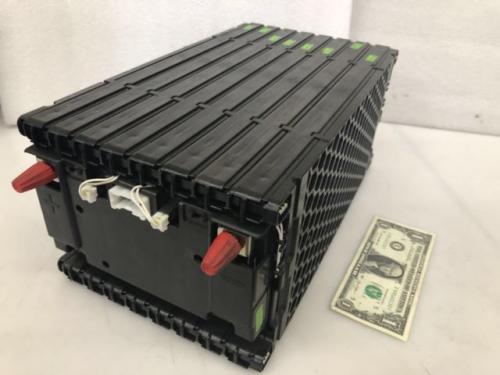 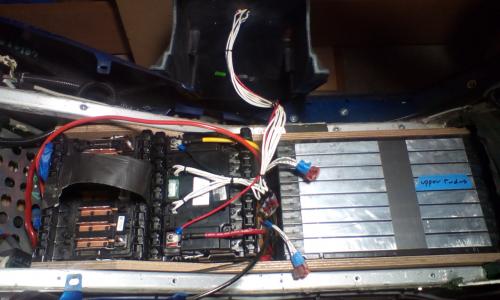 I have used 3-48 volt Chevy Volt modules in series and had a range of about 50 miles. Currently I am using 4 Pacifica Hybrid modules 2P2S which give me a little over 10KWH for a range of about 90 miles. With the Volt cells you have to cut off part of the water cooling that sticks out on each side to get them to fit but it's just plastic and some thin aluminum and rubber O rings. I did it on a table saw once all the modules were bolted together. This assumes you are using Dugas firmware. 36 cells for the Volt battery and 32 cells for the Pacifica. The first pic is of the Volt cells installed. The second pic is one of the Pacifica modules. The third is the Pacifica modules installed.

Another couple of thoughts. If you are using used cells it is best that they all come out of the same car. They will have lived happily with each other and all be the same age and milage and will be balanced. The Volt cells I used had 36,000 miles on them. The Pacifica modules were just ordered from a big Ebay seller Tech Direct or something like that so I had no idea if they were the same age or same usage. The modules were not all the same voltage but the cells in each module were well balanced with each other and after 8,000 miles on them in the Vectrix they are still balanced as well as when installed. Running with no BMS but I check them using wires from the individual cells run to terminal strips under the seat which is very easy to remove.