I just picked up a BE500 as a first (cheap) foray into electrics. But i need some parts. You mentioned ordering the battery case recently, where did you get that from? i havent been able to come up with a thing.

The previous owner replaced the batteries but they are not in a pack they are just sitting loose in the cavity. Also i would like to know what kind of connector is used at the battery box since i will have to replace that as well.

Any help would be much appreciated :)

first off awesome choice on a scooter, hope you got a good deal, the batteries on that scooter need to be in cases, my cases were already in this scooter, i did repurchase new batteries but i used the old cases, if your looking for the cases you can find them here

hope this is a start!

about the baja be 500 as long as u have a charger u can test any ebike with the appropriate charger plugin and test. plus ive been looking for diagrams for the harness since my father got into an accident on my bike lol but ya lots of work transfering the harness over plus does anyone know if there bike does 60 km an hr as my bike did with only four batteries, anyway im looking for a diagram that i cannot find i have a converter in my bike where i dont know where my yellow wire is suppose to run to but also my bike still runs just dont want to take it on the streets yet in case something eles goes

I found a manual for the baja be 500 at this site
http://www.manualslib.com/products/Baja-Motorsports-Be500-3148821.html

If the link doesn't work just google the name or ( baja be 500 manual) as I did.

Also my bike does about 35mph / 60km on flat ground But then again, It's been re-wired to do so.
Hope that helps.

Did you ever solve this issue? I have the same problem after removing the back wheel/motor to change the tire, as you have to cut the Green/Blue/Yellow wires to disconnect the wiring. I hooked them up as color coded, but I get the same second of vibration from the wheel, then nothing. I did not take a picture, were the colors switched between the controller and motor?
Thanks,
Larry

UPDATE on wiring... I played with combinations of colors between the motor and controller and found the winning combination: blue to blue, green to yellow, yellow to green.

Hi , I recently acquired a BE500 from a police auction here in London Ontario Canada, they have these big auctions here with thousands of regular bikes and a few ebikes, I was looking for an ebike for my teenage son to get to his first job with so I bit the bullet and bought it for 125 CDN . It had no charger but I had a 48v charger from a GIO so I plugged it in only to find see that the fuse was blown, I tried replacing the fuse on the charger but since I do not know exactly what size fuse it is , I used a 250v 5a. The only thing I could read on the old fuse was F6.

So I pulled the batteries out and someone must have replaced the batteries because they are Interstate Batteries, I charged them individually using a combination of a 2 regular car battery charger and a Imax B6 on the Lead acid (Pb) setting.

The B6 showed that the battery stop charging at 14.7v, but when I measured with a multimeter it showed 12.9v.

On the regular charger, the charging voltage on one of the chargers was 14.3v and on the other it was 13.6v, but once charged all hte batteries read about 12.9v for a total of approx. 52v.

So I reinstalled the batteries, the next issue was no keys, so I hot wired it and it seems to turn on now, there is some kind of breaker under the seat that has to be switched in order to get it going.

I drove it it was driving great but I did notice the battery gauge kept dropping, I attached a multi meter to it got to the end of the block and then I started having the same problem BE500Project had where it would cut out at 43v but then the batteries would rise back up to 52v. So from your experience this would point me in having to replace the batteries, the only problem I see with that is that the batteries look like they are in good shape and they charge good.

I also decided to have look at the wiring and it seems like someone had used some cheap wire splicer to the wires. From looking at the wiring diagram found on the sears webpage. 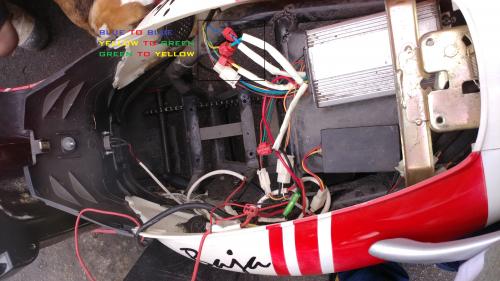 It seems that some wires have been switched, I marked them on the attached picture, the wiring diagram shows these wires as solid colors.

My last question is that the wiring diagram shows a "Anti-Theft Controller" (The little black box in the picture)listed right under the "Control Unit", Could this be causing issues because it has been hot wired?

Sounds to me like bad batts. Even tho they look like they are charging, 1 or more is dropping under load of driving it. You could buy 4 of the small LED voltmeters for a couple bucks each and wire 1 to each battery so you could see which batt/s are dropping, but best bet is just replace all 4.

I found out one of my neighbors has a 48 volt gio, I am going to try those batteries in it, Do you have any I dea why the 3 wires going to the motor have been switched?