Well I am now a member of the XB-600 60V club with the "shunt" mod done. What kind of increase has everyone else got from their upgrades? I seem to get max of 28-29mph on the scooters speedo. The pickup is nice but I guess if I wanted more I could always redo the shunt. I used 1.25" of a basic coat hanger, I am guessing it is not as conductive as some of the others that people have used. I could always redo it with 1" of the same hanger.

But, lets get down to the main reason I made this post.....
After thinking long and hard about an easy place to put it, I decided somewhere under the seat would be good.
So I took out the plastic shroud above the rear tire well. I then bent the 2 metal tabs holding it down, the one directly behind the controller, I tried my best to bend it directly downward. I then used a metal strip to connect the two together for support from the bottom. I then re-attached the shroud underneath this space. I put the battery laying on its back with the terminals facing forward, and used a large tie wrap to secure it to the frame and support. For now, I used electrical tape to cover the battery terminals and make them as weather proof as possible. here are some pics, had to use my cell phone for them so they arent the best quality in the world....

Just wanted to get this info out there and get some feedback. Maybe someone loves the idea and goes further. Maybe u hate the idea, I dont know. Just giving my 2 cents worth!! :)

I'll keep everyone posted on any mods I make or think of.

I havent followed the wires, so sorry to be lazy, but can someone tell me where the + and - for the dc-dc converter comes from? Does it come out of the controller or is it the extra red wire in the bundle right before the 30A fuse???
Because if it comes from the red wire a few inches before it gets to the 30A blade fuse, the way I wired my extra battery would remove any cause for concern about the dc-dc converter even when u go to 72V.

Just before the 30A fuse(the side away from the controller) I cut the wire. This is the + (red) wire coming from the 48V battery pack. I then added wires, 1 from the battery pack side, to the - terminal on my 5th battery. Then from the + terminal of my 5th battery to the red wire that goes to the 30A fuse. This way(unless I am mistaken) the dc converter only gets the main 48V, the controller gets the full 60V and so does the main charging receptacle. Obviously if the dc converter gets its power through the controller, this would do nothing other than making it easier to remove the battery pack and reduce the length of wire needed.

Anyways.... 1 week with the shunt mod and 60V going.... no problems at all so far, the actual top speed I get according to my GPS set up for a bicycle is 27.8 mph. I havent gone over 8 miles before recharging yet, but I plan to ride it till it dies pretty soon so i can see what its max range is.

60v won't hurt the dc-dc converter anyway. It sounds to me like it's getting 60v the way you wired it still :) I ran mine a few days at 72v before my relay came in from digikey.com and it didn't blow, so don't worry too much about it. If I'm not mistaken it's rated 60v anyway.
-Warren

Keep the rubber side down and the shiny side up.

Will the battery be o.k. in that position? Just curious.

The shunt mod will not give you what you are looking for. I would suggest the following.
1- Replace controller with 72V 45A version
2- Replace DC-DC converter to 72V model
3- Add a Li-ion battery Pac 16V 32Amp
4- Replace Hub Motor with 1500 Watt 40 Amp version.

NOW, you have what you want, power and speed as well as batteries that are going to last fo a while with less weight.
Help is available at cruisin [at] live.com

so far so good with the battery position. I guess I wont really know until I ride it regularly in the rain.
It is very secure there and only strong direct tire spray should hit it, with the tire/mud guard in place it shouldnt be an issue.

I dont really need to do all that work Cruisin.... I am fine with the speed etc. maybe a little faster acceleration would be nice.

I AM considering going to 72V though.... Anyone out there who has done it want to report in and say how long its been working for them?? And maybe where to get the Mosfets and Caps......

Pictures made available from outolunchcruisin [at] gmail.com
Here is a good spot to install a battery, even the Li-ion pictured here. Cover removed for picture. 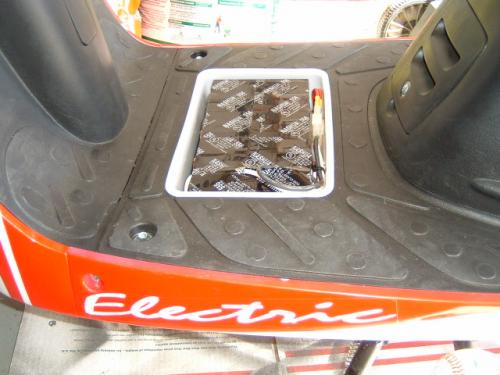 If you have room under the seat, put your Li-ion batteries in a six pac. 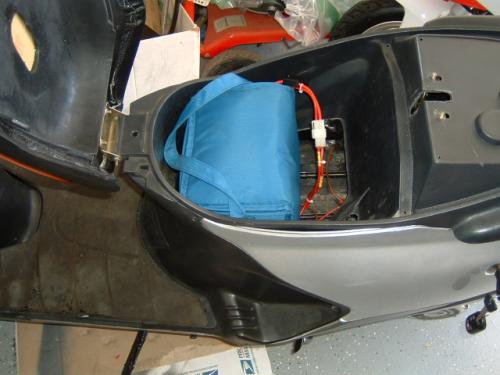 LOL, thats not an xb-600 so that doesnt help much.....
Where i put my 5th battery seems to be working just fine!!!!
I am not sure why... but for some reason my battery pack never seems to reach float charge...
I have even taken my 5th battery out and just charged the main 48V pack with the stock charger.
After 12 hours of charging it still had not shut off and the battery pack and charger were getting VERY hot!!

Should I email x-treme about this as maybe the battery pack has a bad battery or something????
the funny thing is it seems to run just fine, the only problem is when charging the chargers never seem to shut off. Neither the stock 48V charger, nor the 60V charger I purchased ever shut off. They both did a few times. Once I removed the 5th battery after i charged to 70V, I turned the bike on with the lights for a few minutes. Hooked up the stock charger and it shut off in like 5 minutes. Then I rode it for like 2 minutes and hooked the charger back up. 10 hours later it was still not at the float charge....
I am running the chargers on a small crappy extension cord.... could this possibly be the problem???
its one of those tiny cords with 3 outlets on the end. actually I am using 2 of those end to end to reach my scooter, I guess that could be causing the charger to be getting too little power????

Sixpax, this is exactly where I am mounting my fifth battery, glad to see I'm not the only one.
However, you said you cut into the RED positive wire coming from the battery pack just before the 30A fuse - thus allowing the charger to work for all five batteries.
In the other mod thread folks were leaving the RED alone and only cutting into the Black.

Also, it's been a while since you did that, do you still have/ride your bike?

Update:
I built the harness for my fifth battery and set it in (but it's not wired up yet). I'm riding it around with the fifth battery in place just to check for problems.
I also had FUN working out the logistics and tinkering with the set up to get it just right. There is NOT a lot of room under the seat and the battery (the way I set it up is held at an angle.

I bent the arm that held the mud flap, just like you did.
Then, I used the welded flanges off the rear axle (this is part that holds the rear wheel well) it has two machined screws on both sides of the wheel.

Using metal strapping band I supported the platform off the bent arm that held the mud flap, and up around the chassis - this was just extra I didn't really need it and honestly the only reason I did that was because the banding strap has some flex. The problem with using both the mud flap arm AND the rear wheel flange is that the suspension pivots between the two and nothing solid can be built there. So my battery is really independent off the rear axle not the main chassis.

Once I had the supports fitted and the battery in place I used cable ties to strap it down. The seat pan fits *exactly* over it. Thus there's no room for it jumping around (which is wasn't anyway)

My main concern was the clearance on the wheel well (which I believe existed prior to my tinkering). It's pretty damn close. I was concerned the weight of the battery would push it down since the plastic is so soft.

My other issue was clearing the springs on the shocks -- which is also okay.

I took the bike out and rode it around and aimed for some pot holes and bumps. I gave it a full testing. I cam back pleased and everything is in the exact position as I started.
I will revisit the harness later after some time and distance. I still think a better mousetrap can be made for it. Basically, what the battery needs is to be cradled -- but I'd have to manufacture that later.

SO... what I need now is to wire up the fifth battery...
However, I'm still a bit confused on that because some folks have cut into the red line and other have cut into the black line. Some are charing all five batteries, some are charging them separately, some are buying 60v chargers, some are adding relays and switches and some are making three-prong dongles. So many ways to skin a cat.