I am sorry I did not post anything new since a long time. My batteries died and winter arrived, so I was not in a mood to write anything new. But now spring is at our door ! There is still a lot of snow outside, but in a month or two I should be able to ride my Ebike Again !

Here is a picture of my backyard: 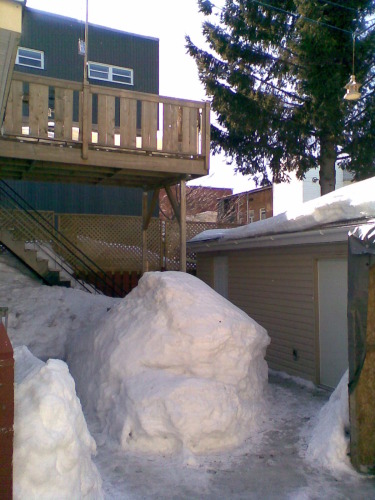 The little story of my batteries

When I first bought the bike, I paid a ridiculous price (200$) because the motor(or maybe the controller) and the batteries were dead. During the first week, I charged the four 12v batteries in parallel using the 12v output of a computer power supply. When I first received the batteries each one had about 2 to 3 volts of charge in them, but they were not completely dead. They had pass all winter without charge probably in cold condition. After one week of about 8hours of charge per day (I wanted to check them while they were charging to be sure nothing burns !) I was able to put them in series again, and charge them using the included charger. After that it took about two 2 charges of about 6hours using the 48v charger before the light finally turn green ! At this point I don't think the batteries were as good as new, but at least the voltage was right, so they would be able to turn the 48v motors !

At this point I tought the rest of the bike was O.K. But the bike really had problem at start. When I was already moving everything was fine, but starting from a stop did not work every time. After about 1/3 of the kilometer, it died. Nothing was working anymore. That's when I decided to move to XB-600 motor and controller.

After the long modification of the bike, I finally was able to ride the bike again for about two weeks. At first I was able to do about 3 kilometers, but it seems like each time I used the bike, the batteries were giving me more juice. The second ride was about 6km, and so on. Until one day I decided to make it all the way around the city ! This was the first time I depleted the batteries completely. I was able to do about 15km !! But for the last kilometers the bike was litterally crawling at about 2 to 3 Km/h, and the voltage cutoff of the controller was happening all the time when I was putting the accelerator to the floor. I waited until next morning to charge the batteries(big mistake !) and after I plugged them in the charger I went to Work. When I came back about 9 to 10 hours later, the light on the charger was still red ! And there was a really bad smell of sulphur in the air ! Normally after a normal ride, the batteries took about 6 hours to charge !

I opened the batteries case and found their form has changed ! They were once cubic, and now they were round ! Not like a ball, but their original form has changed. Since winter was to begin, I did not bought new batteries at that time. But now is the time ! I am still not sure If I will invest in lifepo4 batteries, I know they are a lot better than lead acid batteries, but I'm not sure If I want to put my ebike battery on Credit ! 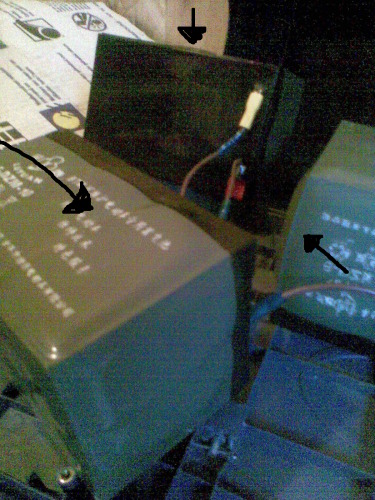 I think I will not continue using two 48v battery in parallel. The experience was not that conclusive. It add a lot of weight to the bike, so the range is not really better. There was also a lost of power, because I used too small wires to connect everything together. I will probably rewire only one battery pack to the controller using big wire(something like 10awg or 12awg) with the smallest length possible to get the most out of that battery pack....maybe ShuntMod later !

So my blog is back !
I'll keep you in touch with my next mod !

Yeah, the things batteries do can be astonishing sometimes. I have a pair of swollen batteries out on the porch.

Anyway, converting a bike set up for lead acid over to LiFePO4 is a) expensive b) not exactly trivial. It's not exactly hard either.

Is your town small enough you could ride around it easily with the lead acid pack? If that's the case, it's certainly easier to use lead acid again and not worry about getting a lithium pack.

What probably happened in your case ... I assume for your initial charging, that the reason you say the batteries were dead is they read 0 volts? And they wouldn't respond to the charger normally? What's the amperage of the 12v power supply you used? Was it exactly 12v supply? I'm thinking that leaving them on a 12v power supply for long periods of time could have damaged the electrolyte ... if so that would explain the swelling.

thank you for reading my blog !

I will probably stay with lead acid for now, they are good enough for my use.

The 12v power supply I used to charge them at first was a micro ATX computer Power supply. The Amp output is 2amp at 12v. At first when I received the batteries they were at around 3 volts if I remember well. They swell the third time I charged them after a long ride using the 48v charger.

I hope my new batteries will last 2 years !