First I have 2 motorcycles. Both are Yamaha 650's that I bought off ebay. I went to ohio for this bike... 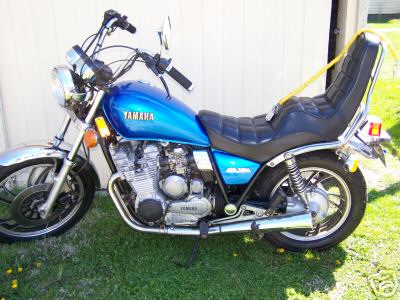 Love the way it looks :) Just had to have it. Only thing needed is the carbs cleaned. They are being done now at the shop.

Went to Ct. for the parts bike. got to visit my brother when I was there and stayed over for the night. 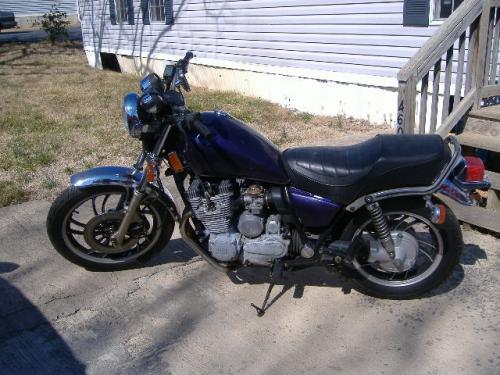 This is the parts bike.

A week ago I decided to convert the parts bike, and would put parts aside for the first one so I took a couple hours and stripped it down.

First I took off the seat, tank and side covers, then the exhaust and carbs and the battery box and air box came off. I set them off to the side. 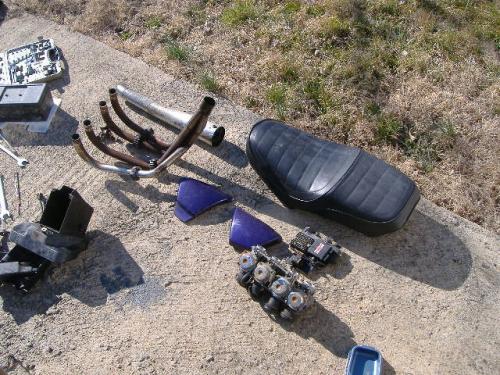 Took off the harness and then found I had to remove the headlamp to get the harness off the rest of the way.. Started to slide the engine out but it wouldnt move, there was an obstruction up front so I started to unscrew that and oil dripped out. I drained the oil and removed the air filter. (can you tell this is the first time I ever worked on a motorcycle? normally I send it to a shop, but I have a book now and am learning more all the time). I slid the engine out and it caught on the kickstand which went down as I lowered it. I wiggled the engine off the kickstand and was done with the hard part. I went to move the engine and found I could only lift it a couple inches off the ground so the kickstand must have saved me from dropping it when I slid it off. I moved the engine aside and here is what I had... 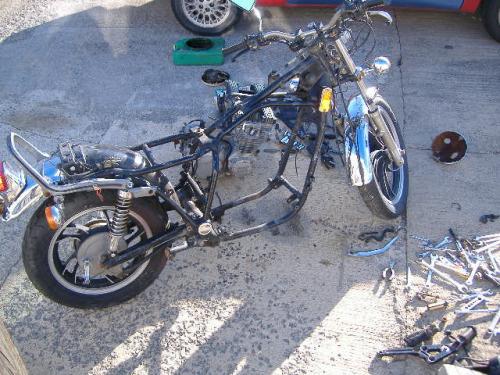 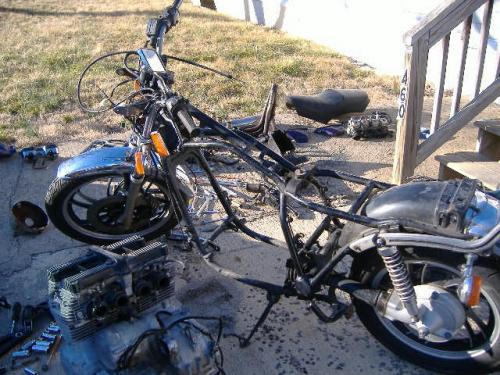 I couldnt pick up the engine to move it so I ended up moving it a little at a time to the side of the driveway and it is still there with a wash tub over it til a friend comes over that an help me pick it up. I put all the parts in the shed, put the seat, gas tank, and sidecovers back on and it's ready for the motor, controller etc and batteries. 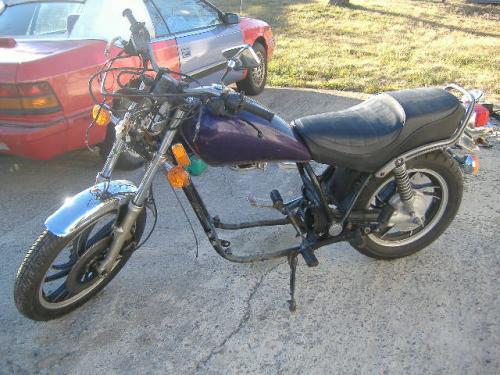 Now Im on hold while I raise the money to get the parts. I found a kit with all the parts I need already to go, it will be about $1600 total I have a link for that on my post. Then the batteries look like they can be anywhere from $300 to $1200 depending on what I go with. Think it will have to be the cheap batteries for the first round, then later on when I get money again I can upgrade them.

I want to thank all of you folks who gave suggestions and links in my post, and told me about making a blog.
This is my third try to get the blog in. First time it didn't submit because of a bad connection or something and when I hit the back button to try again it said page expired. Second attempt I was almost done and a cat jumped up here and closed my window. I am now going to select all and copy in case something else happens when I hit submit so I dont have to write it all again LOL.

Update:
As you may have read in the post in the forum section, Frodus has a motor I can use for this project. He also has a controller, and it will cut my cost by about half. I am currently making arrangements to get him the money so I can start putting the works in place. Thanks again Frodus :)