This weekend I rode the Rezistor to Spring Scoot, a scooter rally held annually each year here in Portland. It basically served as the initial test run and range tests. I started with a 6.6 mile ride on Friday night and rode progressively longer distances Saturday and Sunday. I finished with a 14.5 mile ride Sunday evening, much of it at full throttle. There seemed to be juice left when I got home, although my headlight (and presumably the rest of my accessories) seems to have given out a few blocks earlier. The controller, motor, and power cables were only a little warm.

I've been recharging right after every ride back up to full capacity. There's a little LED on each charger that changes from red to green when each pack is fully charged. After an 11 mile ride on Sunday it took roughly 4 hours to fully recharge the two 36V 20Ah LiFEPO4 battery packs from YESA.

The motor and controller are working well. I noticed sometimes that when I twist the throttle from a dead stop, a brief rattling noise comes from the motor and acceleration is delayed momentarily. If I give the bike a tiny push forward with my feet, then ease on the accelerator very slowly, this seems not to happen. I'm theorizing that the controller gets "confused" when the motor is at a dead stop, not knowing exactly what the rotor position is, and the rattling sound is caused by the rotor flipping back and forth. When I give it a little push, the controller seems to realize that the motor is spinning forward and it engages smoothly.

I also noticed some differences in acceleration, probably due from the presence or absence of the 10-second temporary current boost to 250 amps from the controller. Without the boost, acceleration is pretty slow, even slightly less than I would expect from a 50cc ICE scooter, but it's pretty decent if I get the boost. I find that, when stopped at a signal, I can get the boost pretty reliably if I put the forward/reverse switch into neutral while I wait, switching to forward when the light turns green (and then pushing the bike forward - I almost never get the boost if I hear the rattling noise). I don't know how often the controller allows the 10-second current boost to happen, whether it's a function of the fwd/rev switch, some amount of time between boosts, or something else.

I can feel the motor drag when I coast; I presume this is the regen activating. I'm learning to use the brake levers as little as possible to maximize my efficiency. I'm also riding hunched over a lot when at speed, since the Vespa's aerodynamics are bad enough without the addition of my torso as a sail.

Sunday I clocked 35 mph with my GPS, which seems to be about my maximum on flat road. I'm assuming I'm getting 100 amps at full throttle. At some point I may send the controller back to Team Delta to increase the continuous voltage, maybe to 150 or 175 amps. The motor is rated for 100 amps continuously, but it's getting plenty of ventilation, and with the way I'm riding it's not really a continuous demand. 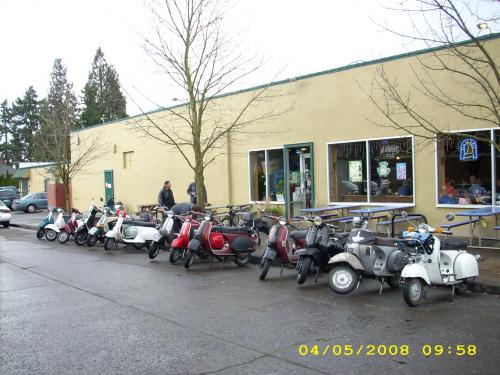 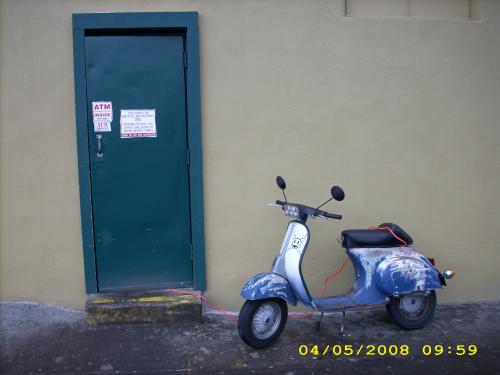 Saturday morning at Spring Scoot 14. Breakfast was at Mickey Finn's in southeast Portland. Behind all the scooters on the street, you can just make out the Rezistor parked way in the back on the sidewalk, next to a door through which I ran my extension cord inside. 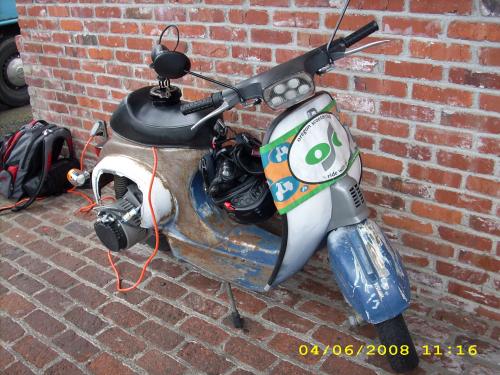 Charging up at breakfast on Sunday. 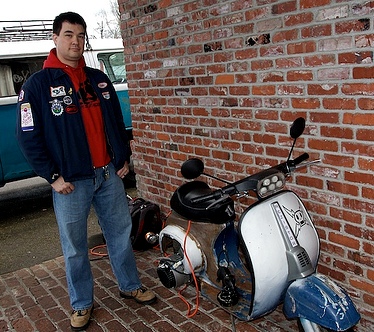 Twist'n'Play Scooter Club awarded me the rally trophy for Best Rat Bike. It's sitting on the floorboard and yes, it has a big rubber rat on top. The other rallygoers had many questions, many of which I really couldn't answer completely because I wasn't done testing it yet. It was especially fun to demonstrate reverse gear.

In general, I consider this weekend to be a success. I built the thing mainly as a commuter vehicle, and Sunday I rode almost three times the distance of my round-trip commute on a single charge. I have yet to find out what my ultimate range is, but I suspect it's not much further than 16 miles.

Your bike looks great! I am working on a Vespa EV conversion myself and very much enjoyed reading your blog. My bike is not quite as far along as you are, but I have already struggled through many of the same problems. I modified the drivetrain in a slightly different way: maintaining the Vespa transmission and running a chain drive to the layshaft instead of the rear axle. Please take a look at the website below, which I've just started using to document my progress.

Nice Rally, Ray! That looks like it's going to be a pretty good ride. 72V should get you moving pretty good, even with the weight of all that lead. I was thinking that my next build (if I can save up enough for lithium batteries) would be a larger Vespa like a P-series, and run it at 72V with the Perm 132.

Will the motor and controller be concealed inside the right cowl? I'm going to have to cut the side door around my motor because it sticks out so far. Kindof a pity I think, since I hear those doors aren't so easy to find.

Do you plan to keep the engine case filled with oil for all the gearing?

Good luck with the rest of the project!

where in portland are you, I'm in Tualatin, but come into the city 3 times a week for my second job... which is.. working with Synkromotive on Electric Vehicle conversions/controllers/BMS... It'd be great to meet up.

Sweet project! I am using the same powertrain on my "T-Wreck". Dan at Team Delta set me up as well.

I also noticed some differences in acceleration, probably due from the presence or absence of the 10-second temporary current boost to 250 amps from the controller. Without the boost, acceleration is pretty slow, even slightly less than I would expect from a 50cc ICE scooter, but it's pretty decent if I get the boost. I find that, when stopped at a signal, I can get the boost pretty reliably if I put the forward/reverse switch into neutral while I wait, switching to forward when the light turns green (and then pushing the bike forward - I almost never get the boost if I hear the rattling noise). I don't know how often the controller allows the 10-second current boost to happen, whether it's a function of the fwd/rev switch, some amount of time between boosts, or something else.

It has taken me a while, but I think I may finally have this boost feature figured out. It won't necessarily activate if you just goose it from a stop, but it seems to engage if there is a high load from a stop. For instance if you are pulling something, or starting on a hill, etc. I can get it to activate almost everytime if I hold the brakes while trying to start from a stop. It feels like it clicks over and then begins running 250 amps for ten seconds. What I haven't figured out, however, is how often it can be used.

I was also thinking about turning up my continuous amperage, but instead I think I am just going to sell this 36V controller and buy the 48V version. Cool setup!

I may up the voltage to 48 as well at some point. I'd have to get some more cells from Yesa, figure out how to fit them in, get a new BMS, and get a new controller. Might cost close to $1000 all told.

Nice job on the Trek. What's your constant amp limit? If/when you switch to LiFePO4, you may want to check out Yesa.

Nitpicky comment: you list your motor as a Briggs & Stratton - technically this isn't correct; the brushed version is made by Mars Motor. I think it's commonly called the "brushless Etek" because it was developed by the same person that developed the original brushed Etek for B & S.

This is one of the coolest things I've seen. Are you aware of anyone else doing this with an old model Vespa?