I had a harrowing experience yesterday while I was riding the Rezistor home from work. I smelled something funny (it always starts that way, doesn't it?), looked down, and saw smoke coming out from under the seat. I pulled over, cut the power, got off, and saw the paint on the exterior catch fire. I blew out the fire, lifted the seat, and saw some arcing between the corner of the battery pack and the inside of the scooter body. I disconnected the battery pack immediately. The pack fits pretty snugly, so it's not too easy to pull out, and I kept bumping the corner of the pack, causing more arcing and reigniting the body paint. I eventually managed to stick some insulating material between the battery and the body, pull out the battery pack, and ride home on the remaining battery pack. Fortunately, none of the smoke was of the "magic" variety, as everything else seems to still work. 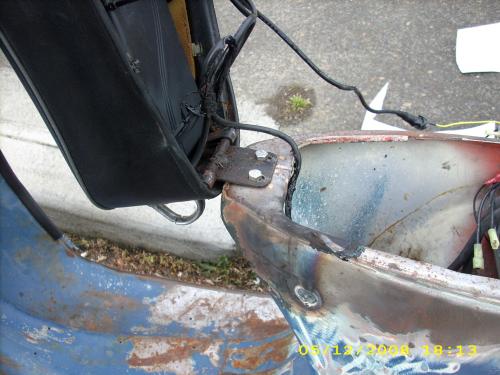 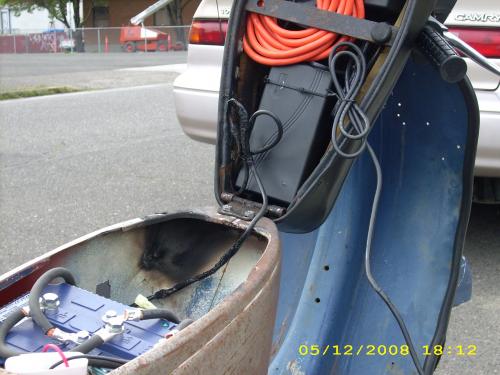 What had happened was the corner of the pack had been rubbing against the scooter body and eventually wore through the outer casing. When the battery innards came in contact with the metal of the body, they shorted and arced, producing plenty of heat to vaporize the corner of the cell and ignite what paint was left on that area of the body. 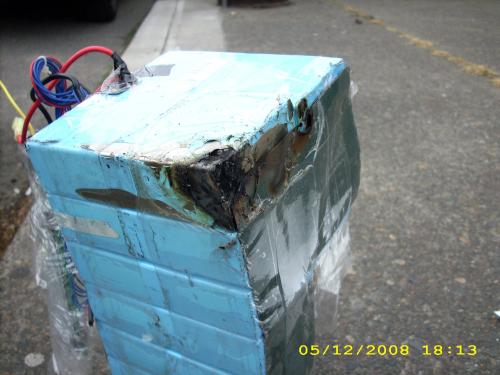 Let me emphasize that the batteries themselves did not catch fire. The damage was caused by my own failure to properly secure and insulate the batteries within the vehicle. The LiFePO4 battery pack appears to have remained very stable, and the other pack was fine. I plan to contact Sam at YESA to see if I can buy a single 40Ah cell to replace the ruined one and try to get the pack back in working condition.

So here are the lessons to be learned: Secure your LiFePO4 batteries so that they can't move around inside your metal scooter body, and cover the battery pack with a tough insulating layer.

A few less dramatic issues to report: A couple of weekends ago I paid a visit to Synkromotive, a company not too far from my home that develops controllers. I met frodus (Travis), one of the guys who posts here, and he showed me the current state of his eVFR conversion (nice!). I also had some excellent conversation with the Synkromotive folks. It was nice to have my project looked at by some people who actually know what they're doing.

Sometime during my visit, the fuse to my 12V converter blew, so I went home and replaced it. I started riding again and almost immediately noticed an smell reminiscent of cigarette smoke, so I shut down and pushed the bike back home. I checked my 12V converter, and it no longer appeared to be converting - I had 36V running through all my auxiliary systems. This resulted in burning out about a third of the LEDs in my headlight (although the taillight LEDs were all fine). I bought two of these nonisolated converters from TS Motors and this is the second one that has failed. Frodus helped me find a new 12V (isolated) converter on eBay for about $30 and it seems to be working fine so far.

I knew that I had a short in my system somewhere, and I suspect that's why the converter failed. After hunting around, I finally found that the postive terminal of the battery pack under the left cowl was coming into contact with the battery rack. So I cut apart some cat-litter containers made of HDPE and made an enclosure for the pack to keep it from contacting any metal parts. That took care of the short. I suppose I should have done that for the other pack as well...

Also, I finally bought an LED-compatible flasher module and installed that last week. My turn signals still aren't working quite right, though, so I've still got some wiring to check. I've started working on license plate illumination and backup lights for reverse gear.

Welcome to the club :D I've done the same thing twice...doh. unfortunatly unlike you my batteries shorted together got very hot, then vented. which made a sound like a fuse going going off and sprayed smoke everywhere. i had to stop the bike at the side of the road lift out the hot batteries and put them into a bin (trash can), which looked even more dodgy. Fortunatly the only person around to watch the whole thing was a young teenager who seemed genuinly entertained by the whole experience. If it had happened in a crowded place I'm pretty sure and would have standed a good chance of being arrested by armed police. The cause of the fire was exactly the same as you - a short on the frame of the bike. Fortunatly I only lost 7 cells (nimh 13AH)