I spent the day at Kent's machine shop. Kent has been a friend of the family over the last 50 years or so. He's not only a very interesting person but has,by far, the most interesting machine shop you could possibly imagine.

As I worked on trying to figure out what was wrong with a 1250W inverter that had recently died (Kent lives off grid and has another shop at home, which uses the inverter), he bored my two grooved pulleys so they would fit the 5/8" motor shaft and the 5/8" jack shaft on the MB-1-E.

Per Chuck's suggestion, a hole was drilled off center for the key way before boring. I filed the top two edges of the key to accommodate the rounded key way and the pulley went snuggly onto the shaft. The larger grooved pulley had a large boss with setscrews, so no key way was necessary on this one.

I put the toothed, synchronous belt over the pulleys and low and behold it was the perfect length.
I made a belt adjustment then re-tensioned the chain adjustment and gave the bike a try.

Now I previously had two V-belt pulleys that made my ratio a 12:1.
The new toothed belt made the overall ratio 9.22:1.
I expected the bike to be a bit sluggish in comparison and perhaps slightly faster at top end.

I'm not sure whether the toothed belt is just so much less friction than the V-belt or that the positive connection via the pulley grooves made the difference, but I was pleasantly surprised the the bike was very peppy and about 5 mph faster than before.

The new belt and pulleys look nice on the bike. I'll get some pics in the next day or three to show you.

Anyway, it was a fun day and we both got some riding in on the MB-1-E. Kent went down a very steep street then stopped at the bottom, started out and was going 18 mph by the time he got to the top. I went up and down some horse trails and hilly terrain and we both were terrorizing the neighborhood zooming around on the bike.

I'm very surprised at the difference. I may never go back the the V-belt again.

Is that htd belt quite?

I see you waited until my bike was down to post this, kick a man when he's down

Sorry to hear that your bike is down, nothing too serious, I hope!

I didn't notice any appreciable noise with the HTD.
Perhaps a very slight whir when first accelerating but nothing notable. It's something that I would have to have to listen hard to even detect.

Here are some pics of my MB-1-E since I put on the new controller, a larger rear sprocket and the synchronous belt drive.
The bike is now at 9.22:1 overall ratio and is really working nice.
So far, any hill that I've tried that was at least 1/4 mile long, I was going 18 mph at the top (without any pedaling). It goes 24.5 on the flat and stays right there, if I back off to about 3/4 throttle it does 19-20 mph. Just got back from a 10 mile ride and it was a fun one. I've got the bike on the charger for a second ride this afternoon.
Can ya tell I'm stoked about my new synchronous belt drive ... ;) 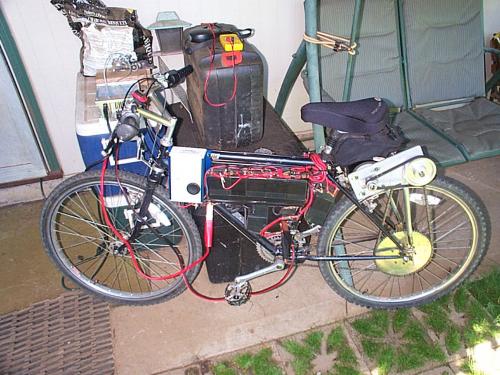 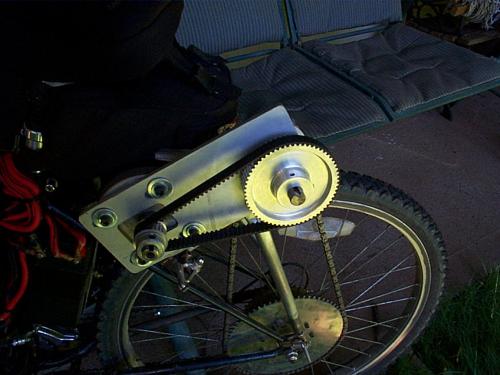 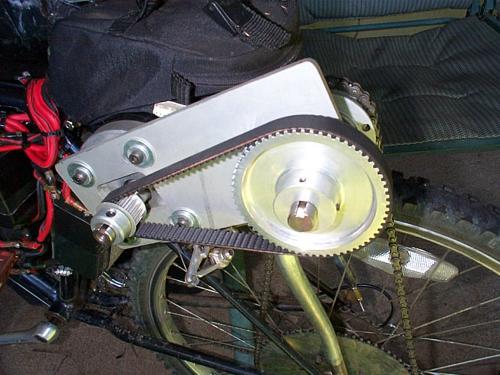 One thing about those altrax controllers, they sure aren't stealthy, that one looks bigger than mine. Must be the function of programming requires a big case. I think I am going to paint mine, it stands out, yours jumps out.

I don't know what it is about these ebikes, it has to be a little bit about the child in all of us, they are just so much fun to ride.

I was always surprised that you put a v-belt on there. They are so ineffective compared to flat belts. Generally used only when there are heavy shock loads, require constant attention.

The timing belts never need adjustment, well, maybe once in their lifetime.

The batteries are what are always on my mind, 40 lbs of lithium, sure could go a long ways....

Couldn't agree more about the Alltrax "jumping out at you". I've be talking about painting it since I got it. I need a belt guard and I'm going to trim down the backing plate for the jackshaft too. I can work on the aesthetics now that it's up and running like I want it to. I do want it to look as nice as it rides eventually.

I let a few people try it on Saturday all were blown away at it's speed and pickup and really liked it.

My friend Kent is going to build a little Honda Civic E-car using two motors (one each front axle).
Not sure of all the details yet but he said he'd get in touch when he starts putting it together.
He said my bike really was a an inspiration to get going on the project. I think he wants to eventually make a series hybrid but will start with battery power only then add a small motor/generator to charge for additional mileage.
Sounds like a fun project!