In case you hadn't heard there are a lot of electric motorcycle races going on this summer. One of them, the TT Zero, just ran on Thursday on the Isle of Man. See: Mark Miller of Motoczysz wins 2010 TTZERO, Rob Barber of Agni Motors in 2nd One result of this is a lot of hype attention pointed at Motoczysz making them seem like the Second Coming of Christ or the best thing since sliced bread. e.g. The Motorcycle of the Future Has Arrived, MotoCzysz E1pc: The World’s Most Advanced Electric Motorcycle ... there's more out there including some claims this is the worlds fastest electric motorcycle.

To be clear the win is impressive and to hit a 135 miles/hr speed during a road race is very impressive. But at the same time I'm wondering just how much of this hype is manufactured and how much is honest hype. There are other impressive electric motorcycles in the electric racing scene, also deserving of attention. e.g. Lightning strikes second round of TTXGP 2010 with Lightning Motors win, namely the bikes racing in the TTXGP 2010 series. 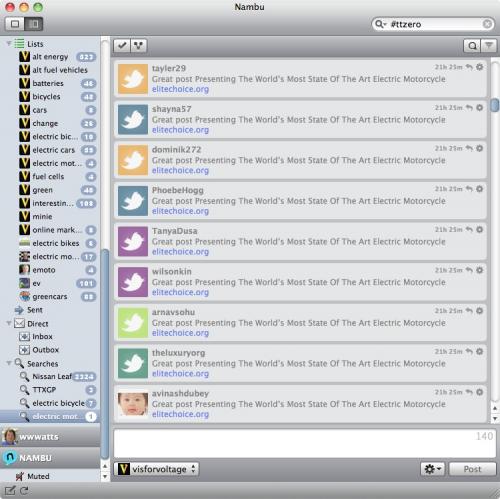 What you see in this picture is just a small sample but look at the time stamp. This screen shot records an identical tweet sent through a dozen different twitter accounts in the exact same minute. This isn't the natural course of twitterers sharing news with one another, this is an organized PR campaign using twitter to send out a message. That block of tweets was sent at 1:28 AM PDT on June 11, 2010 (see twitter.com/shayna57/status/15914279149).

Maybe the tweets in this screen shot weren't directed by Motoczysz. The link in them goes to a website that looks like a pseudospamblog, and it's plausible the owner of that blog saw a trending topic, put together a post, and sent out tweets through roboticized twitter accounts. 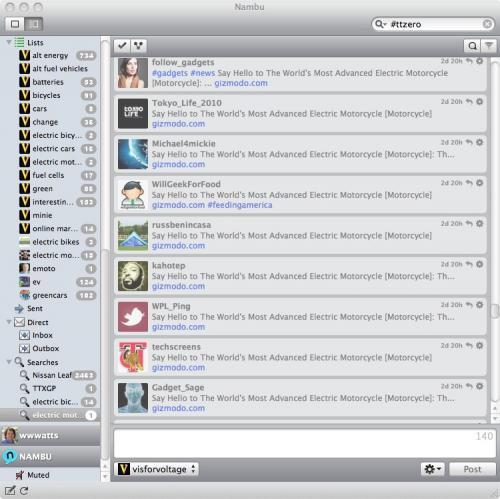 And that wasn't the only block of identical tweets. Another set had the same title but pointed to a URL on engadget's website and also got repeated by a zillion accounts.

Summary .. Yeah, Motoczysz is obviously deserving of some attention. But some of the attention and hype surrounding them is manufactured.

As we say in Oz: Keep the Bastards honest!

except the democrat party failed

now we have only an ultra conservative "liberal" opposition and a right wing socialist government.

Making the greens look like a viable alternative atm

"it's plausible the owner of that blog saw a trending topic, put together a post, and sent out tweets through roboticized twitter accounts."

I would go along with that explanation. I was constantly searching all sorts of places for information during that time about Zero TT, Motoczysz, E1PC, Agni, Isle of Man. I wanted the lastest information and videos. There must have been others like me and somebody spotted the trend.

Too bad the Lightning bike wasn't in the Zero TT. I think it could have done really well...challanged the Motoczysz or maybe won.

There's rummours of bigger Agni motors for the future....competition is good.

I do like what the Motoczysz bike has done. The E1PC is a good looking bike and makes it easier to sell the idea of electric motocycles.

I show people the Popular Science article and they see that bike of the future looks like a polished product. One that they would like to drive. Their positive initial response allows them to think more about the potential of electric motorcycles.

Heavens, did you really say "Honest hype?" Before there were roboticized twitter accounts, there were roboticized employees on messageboards just like this one. Before that it was the newsgroups, with most people still not knowing what the internet was. The Richard Gere gerbil rumor was started on a bet; with only one person in 1,000 even having an EMail account or a fax in the offic at the time the propogator insisted he could have people talking about his rumor. Funny thing is, nobody noticed when he used the same mediums to admit he'd made it up; the truth was ignored, the falsity stuck. Goes to show what word of mouth is good for.

Remember 'The Blair Witch Project?' All these people online talkng about that awful movie were just a handful of people in a 'Dungeon.' Hopefully this bike is far, FAR more deserving of attention than that film was. But what is said will always be far beyond the reality.

And no, the Democrats didn't "Fail," that's what the Republicans did. The Democrats BETRAYED, my party was NEVER supposed to behave this way. . . .

Dauntless, I was refering to the now defunct Australian Democrats, Don Chip the founding leader is credited with the by line "keeping the bastards honest" like reikiman is doing here.

Trouble is for OZ, they are gone and were left with dishonest bastards or honest fools

Oh yeah, I was referring to that too, in the 'Life's tough all around' manner. I wish Reikiman would turn his attention to. . . .

Well, whether it's to bilk investors or what, Motoczysz (How do you pronounce that? Motosize?) seeks to oversell interest in their success without regard to the fact that the pendulum eventually swings the other way. This will bring a net effect of people who THOUGHT everyone was talking finding out the hard way that people weren't talking afterall, and there'll be some sort of underperformance, depending on what they wind up doing. And this will be a setback for the electrics. Kind of like what Asimov called "Psychohistory" in the 'Fuondation' series, you can't predict the future itself, but you can predict the effect.

So when Obama was really taking it on the chin a year ago, he decided to deflect attention to GM and demand the head man step down. In spite of the fact that Rick Waggoner was regarded as doing a good job, Obamam used the government bailout to try to rehabilitate his own image by pretending he was doing his job. Now when he's reeling again (Or is that STILL?) he's got the general making fun of him. And this general is a fun guy for a special forces/trained killer. (Love the play on Biden's name.) Gotta wonder if the general was creating his own excuse to just get himself out of that mess. But after another session of 'Operation Frequent Manhood' Obama finished his rant and was letting the press leave when he suddened began demanded they come BACK so he could deny that he'd boot the general for his own petty reasons. (If that wasn't a possibility, why would he even bring it up?)

I just hate the fact that so much is demanded of these guys in the military, who can only be recruited from the human race, and yet they are then kicked around by whatever goofballs are appointed by whatever oaf can trick people into voting for him over his QUALIFIRD opponents, then let them DARE say what we all know to be the troth and they're pushed out because some incompetent has hurt feelings. As I say, if only there was a way that Reikiman could turn his attention to. . . .