Last year there had been a bit of controversy concerning the business architecture set up by Azhar Hussain to run the TTXGP race series. The three organizations are the eGrandPrix/TTXGP to do race sponsorship, Mavizen as a supplier of motorcycles and parts and services, and a technical review board run by the IET (Institute of Engineering and Technology); UPDATE: Rupal asked me to clarify that eGrandPrix/TTXGP does not own the IET, which of course they don't, I'm referring to the technical review board. Some worried that engineering and technical information gathered by IET in scrutineering the bikes before races would leak into Mavizen to give Mavizen an unfair advantage.

This years announcement about sponsorship by A123 indicates a restructuring (See: TTXGP North America 2011, the A123 Infineon round... New Sponsor and team list.).

Rupal Patel, Director of New Business Development, is quoted saying "In addition, the distribution agreement between A123 and Mavizen, TTXGP's principal technology advisory and consulting arm, allows us to make best-of-breed technologies accessible to TTXGP teams, which improves the quality of their performance while increasing safety."

At the same time Mavizen appears to be stepping back from supplying motorcycles, and intent on supplying parts and services to race teams. (see Mavizen signs battery distribution agreement with A123 Systems) The North American series does not have a team riding a Mavizen bike, and Azhar Hussain's email to me a couple weeks ago downplayed their role of supplying motorcycles. Further several manufacturers have stepped up to supply electric motorcycles, such as CRP Racing, Spa Francorchamps, Mission Motors, Brammo, Roehr and Lightning Motors. If Mavizen continues to not supply electric motorcycles then last years' worries will be rendered moot.

Is the FIM attempting to "steal" electric motorcycle racing from TTXGP?

More info on the electric superbike coming soon from Mavizen

Considering the twelve PR problems of EV's (according to EVCAST)

Last Christmas, the hijinks meisters at the EVCAST released a song detailing the 12 PR problems they see about EV's. With the exciting news this year about electric vehicles of all stripes, it's worth nitpick about and reflect on the issues they listed. (FWIW the song is funny - so take this nitpicking and enjoy it anyway)

I recently had the privilege to test and review a pair of bicycles including one that just makes me question "what's an electric bicycle." See - Head-head the A2B Metro and EMS Elite bicycles

The FIM in their infinite wisdom has created their own electric motorcycle race series, e-Power. The two races held so far have been pretty anemic with a small field and lackluster performances. Not to diss the individual team efforts because I haven't been at any of those races. However the race results indicate the overall performance levels weren't even competitive with the bikes who have raced in the US TTXGP. More importantly the small field of racers is the really lackluster thing.

In case you hadn't heard there are a lot of electric motorcycle races going on this summer. One of them, the TT Zero, just ran on Thursday on the Isle of Man. See: Mark Miller of Motoczysz wins 2010 TTZERO, Rob Barber of Agni Motors in 2nd One result of this is a lot of hype attention pointed at Motoczysz making them seem like the Second Coming of Christ or the best thing since sliced bread. e.g.

(May 31, Mountain View, CA) - EV Journalist David Herron was found this Memorial Day weekend staring his computer and mumbling about how big Tesla Motors might become if their deals with Toyota and Daimler pan out. Or maybe the deals could go awry and Tesla would die. To David this seemed like a big story, one which needs to be told, despite the cost involved in missing the beautiful weather outside.

The Toyota/Tesla/NUMMI deal appears to be pretty darn significant

I put together a set of articles on the Toyota/Tesla deal (links below) and it looks to me like a significant step. This is a summary ...

A preview of a future parking controversy - are hybrid cars allowed to use electric car parking? 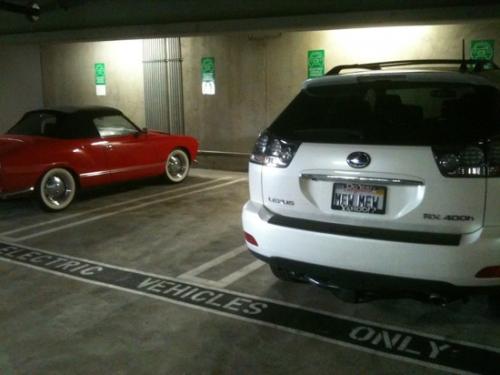 Here in California there are electric vehicle charging stations in some parking lots or garages. Primarily these were installed in the period 10+ years ago when the EV Mandate was still strong. Obviously EV success is more assured when there is recharging infrastructure. Part of the success of gas cars is the existing gasoline recharging infrastructure that lets gas car owners to conveniently drive anywhere.

Review: The End of Suburbia

The End of Suburbia is a documentary concerning itself with predicting the effects of the coming peak of oil production. It consists of interviews with leading peak oil educators including Richard Heinberg, Colin Campbell, Michael Rupert, and James Howard Kunstler.

Bike-to-Work day is this week. In the past I barely recognized it because I bike to work so often it wasn't out of the ordinary for me. However there's a big deal made about it seemingly. At least here in Silicon Valley there is active promotion of the idea.

How to Live with Insufferable Cyclist Syndrome seems to be assuming a bike-to-work person might sway over to over-hyping or over-evangalising the idea of biking to work. Y'know, scraping their keys along the sides of the hummers in the parking lot, or blocking the hallways when they bring their bicycle inside etc.

Interesting thoughts.. As he said perhaps the best evangalism of bicycling to work (electric or otherwise) is to simply do it and demonstrate with actions rather than words.

Why oh why is it that bicycling advocates ignore electric bicycles? It's like the thought is only non-power-assist bicyclists are pure enough to be called bicyclists. In truth for me anyway the goal is transportation with a smaller power / energy / ecosystem impact, and any kind of bicycle is a huge improvement over driving a car to accomplish the same solo commute to work. Seems to me they should acknowledge that both non-power-assist and power-assist bicyclists are chasing the same rainbow, that we can get to work w/o driving a behemoth that stinks up the atmosphere.

An electric bicycle is more practical for commuting to work as it decreases the concern over being stinky when you get there.

Because an electric bicycle is more practical perhaps it's not required to wear the lycra and all that stuff. BUT, wear your helmet and who cares if it makes you look like a dork. The helmet can save your life, even the skimpy bicycle helmets.

Pay attention to the commute time required for the e-bicycle commute. In my experience my (former) commute took 10-15 mins by car, 20 mins by motorcycle, and 30-45 mins by e-bicycle. Your boss won't appreciate that you're saving the planet if you show up to work late or work less hours because of your longer commute. But you can balance the longer commute by knowing you're getting exercise and becoming healthier.

Pay attention to safety, as it's no good to be using a more wholesome commute process and get creamed by an SUV because you weren't practicing safe cycling. That finger points at me too, because I got knocked over by an SUV while e-bicycling to work one day. Fortunately the SUV was going low speed and I was able to immediately get up and start yelling at them. In any case there are bicycle safety training programs, motorcycle safety programs, and they can teach you about good bicycling safety etiquette.

It's such a shame that most businesses and stores have so few bicycle parking slots. That's part of the overbearing normalthink (prevailing consensus opinion) that the only valid way of transportation is using a car. It impedes the success of using a bicycle for transportation.

It seems most people think of a bicycle as a toy for recreation, and e.g. they'll strap the bicycle to an SUV and drive to a park to spend an afternoon bicycling around, then drive home. Uh? What a crazy picture that is in my mind. Anyway bicycles can be perfectly adequate for regular transportation, and electric bicycles are doubly so.