Anyone want to race?

Just wanted to give the forum an updated picture. We've been busy the last two years here at school. It's been a while since I posted here and had to update my log-in.

The Xtreme Racing Vehicle (XRV) is running an ETEK at 48 volts with a 300 amp controller. We redesigned the rear suspension, eliminating the independent rear suspension an installing a straight axle with one-way hubs. The front suspension is modeled off of a Lee Stohr DSR race car. 205/50-10 DOT rear tires with 80/90-10 DOT front tires. We utilized drum brakes on the front, which were marginal at best. The XRV will literally roast the tires as long as your keep your foot down. It was also the first student-built electric vehicle to perform "drifting" at Road America.

We now have a body mold to build multiple vehicles. We are currently building a second electric XRV for this year. We are aslo building two ICE powered XRV's for supermileage competition.

Now, someone is going to ask....why the big DOT tires? We chose to do that to make the competition more "real world". When getting sponsorships, it was always a sticky situation when you have a sponsor say "But your running bicycle tires, that would never be allowed on the street". We also found out that the DOT tire/rims where MUCH cheaper than your typical electrathon assembly, with increased load capacity. Lastly, when running 48 volts you need as much rubber as you can get!

Now... here in Wisconsin we are piloting a Class 3 electrathon, which is open to adult teams. The advisory council is also piloted a rule saying if a team utilizes four DOT tires, the vehicle is allowed more battery capacity to overcome the increase in rolling resistance.

We'd love to have some of the experts here build a vehicle and show up at Road America! 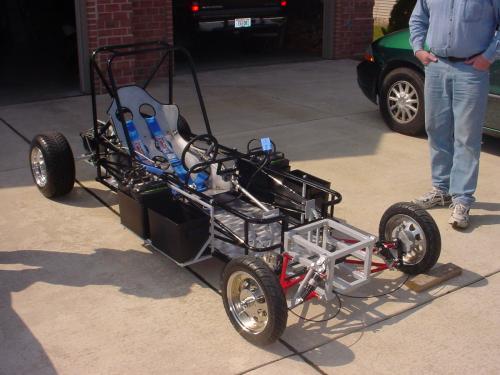 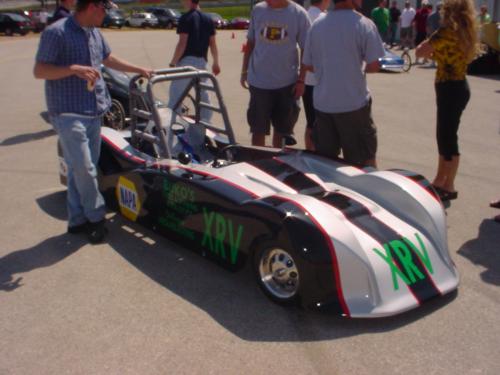 It's just not fair - I never got to do cool stuff like this when I went to school! :-(

Make sure you get some video of that drifting action... :-)

BTW, did you design and fab the chassis yourself? Or is it some sort of off the shelf part? (my metal work skills might let me build that box that holds the front steering assembly but making my own frame? No way!)

All the best and good luck!

The chassis and body are all student built. We did use some off the shelf parts. The shocks, motor, motor controller, etc...

Have to build the ICE versions.... we had a VERY generous donation from an engine manufacturer.

I do have the video of the XRV doing a spin-out.... have to figure out how to make it small enough to post.

OK - can I come back to school and you can teach me how to do my own chassis design and fab? :-)

Ok most of these are not that fast and would get their but's kicked in a race but they are interesting anyway.

Well, as soon as I get my new controller for it, I'll tell you all how fast my junk heap can move, but with the current switch I use, it goes plenty fast. Who knows, maybe I'll race someone with it.
In case your wondering, here is the switch I jery-rigged to test it.