This is a project that's been in the works since the beginning of this year, based partly on previous projects, partly on web research, but mostly on whatever I happened to have on hand when I started it, and what I acquire as I go along.

It's very functional already, but could stand serious improvement (most of which would require parts or tools I don't yet have).

Keep in mind that there are two big limitations on it. The first is that I have no money to spend on it (really, anything I spend on this is food I can't buy), and the second is that part of the goal of the project is to use only recycled parts from other things, wherever possible, rather than anything new.

A third goal, but not a limitation, is to be as outlandish in the reuse of things for totally different purposes than they were designed to do, wherever possible. :)

A fourth goal is to make it as undesirable a theft target as possible, and I think I probably have achieved that fairly well, given it's appearance. :) Unlike my first attempts at various mods (prior to starting the project blog) using my regular upright road bike, where I tried to make it all pretty and neat, stylish, etc, which resulted in pretty much everything I ever added to it being stolen off of it while I was inside various places (though never the whole bike), I went the ugly path, which seems to have stopped the problem ever since.

There is already a build log http://electricle.blogspot.com with photos, test videos, and huge walls of text describing ideas and the way things turned out, as well as problems I ran into and solutions to them wherever I found those (some are never solved properly). I can point to specific posts there if anyone doesn't want to read thru it to find information, but has questions, and can answer here with information for stuff that isn't answered (or not fully) there. The blog goes back over a year and a half before *this* project started, as it is for *all* of my ebike quest projects. The early ones were pretty dumb ideas, so ignore those. ;)

There is a summary of it and some information and pics on the EV Album page http://evalbum.com/2691

I can also post new pics or videos of anything anyone needs to see, as long as it doesn't involve me actually riding the bike to get them as I have no one else to operate the camera for me, and can't leave it out anywhere (not around here) to do the video as I ride by.

Most other places I've gone to that either invited me (FreakBikeNation) or that I found extremely useful (DIYElectricCar, Ladyada) or seemed promising but died stillborn (PCBPolice and e-Bents.net), all turned out to be dead ends for posting up this project to garner interest and possible help with some things I simply don't know how to do, or haven't figured out how to do within the limitations of my available materials, goals, and tools. One site (Endless Sphere) has been helpful, but not directly by discussing the project itself in it's own thread
http://www.endless-sphere.com/forums/viewtopic.php?f=2&t=12500&start=0
but rather by me digging up information in other threads there and asking/answering questions elsewhere on the site.

So if there's any interest in this project here, I'll start posting some questions that perhaps members here can help answer.

The bike nearly as it is now, except this is the older motor. 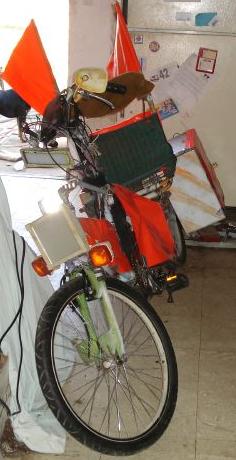 This is the side of the whole thing as it was not long before the new motor went on. 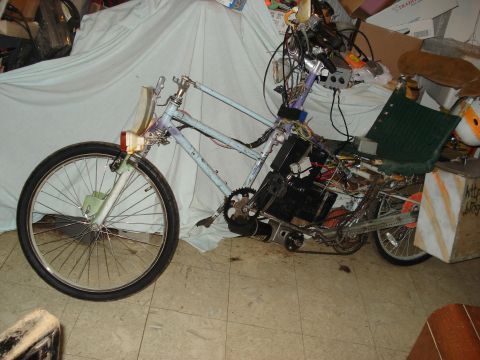 This is the newer motor, and closeup of power transfer/merger part of the drivetrain. 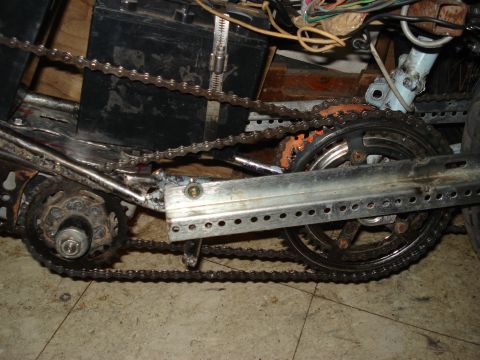 This is the side view with the visibility coverings on it, made from construction flags gathered from a Freecycle.org posting. Again, it's the older motor. 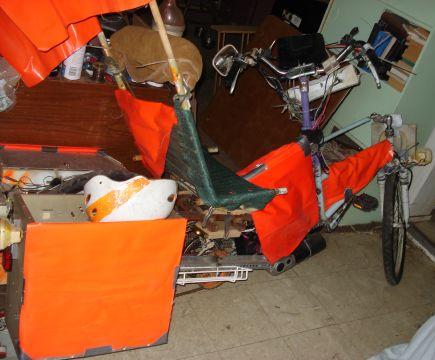 The pics below are all of the bike before I modified the frame to fit all three batteries in the center area, and so well before the new motor went on, or the visilibity coverings, or new non-knobby tires. Also before removing that rear rack and doing some other minor modifications. 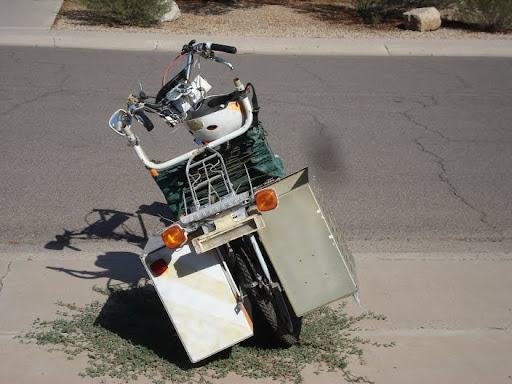 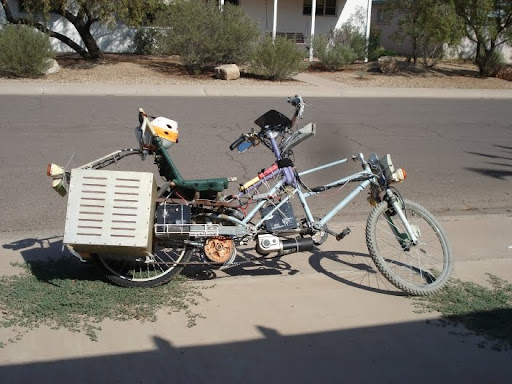 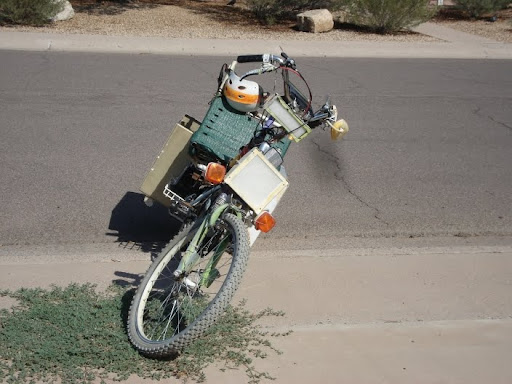 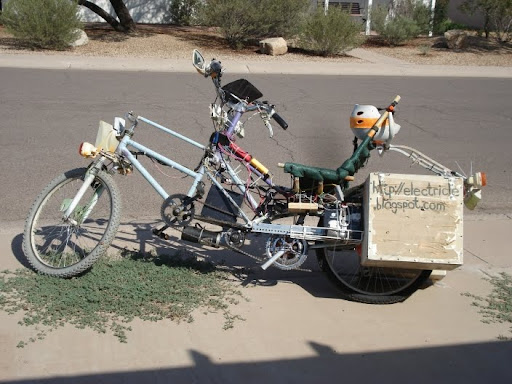 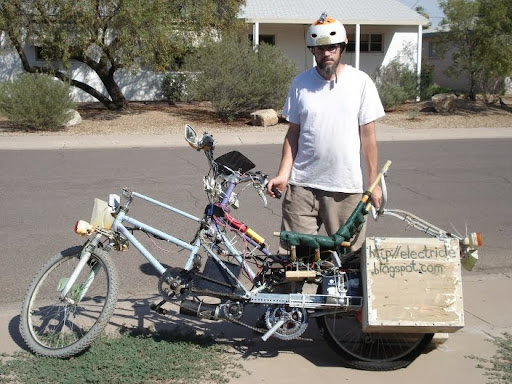 The design in my mind interferes with the cargo capacity. Do you find that it's enough cargo capacity for you? What I mean is a lot of the length of the bike is the front part - and the part that's for cargo is relatively short. Compare to the xtracycle or madsen design and there's a long part of the bike length usable for cargo. But do you think it's better to be in the recumbent position?

I've seen those, but this one kind of just grew out of sticking parts together until they worked. :) I've also been told it looks a lot like Justin's (of Ebikes.ca Cycle Analyst fame) cross-Canada bike, which is built to a similar purpose but in a different way.

I built it out of a bedside "potty" frame. :)
http://electricle.blogspot.com/2009/04/new-seat-started-building-cargopod.html
Then covered it in that green awning material used to give a little shade. I'd rather use something else, but it's the only mesh I had. It's tensioned by lacing parachute cord (found via freecycle) thru holes I melted in the material with a soldering iron (to keep the weave from coming apart by sealing the hole edges, as I didn't have eyelets I could use).

You can also buy them from places (like Greenspeed) that build recumbent trikes, as they are a really common kind of seat for them.

Right now they still do spin with the motor, but since I always pedal at least a little, except when doing motor-specific tests or when my knees hurt too much, it's not that big a deal most of the time.

The design in my mind interferes with the cargo capacity. Do you find that it's enough cargo capacity for you? What I mean is a lot of the length of the bike is the front part - and the part that's for cargo is relatively short. Compare to the xtracycle or madsen design and there's a long part of the bike length usable for cargo.

Typically, it carries almost everything I need for most trips. Those boxes held about 80 pounds of stuff today, including lots of groceries from two different stores. :) Plus a heavy 100-foot garden hose off of Freecycle wrapped around the top of the rear seat top, with the flags.

I do need to move the boxes up so the tops are *just* above the tire, so that I can have a "deck" to put wider things on, like dog food bags. :)

I would prefer to have more cargo space, but any cargo space that stays on the bike itself needs to be lockable, since I usually make long trips with multiple stops along the way. Some places I must leave the bike unattended at have too much risk of thieves taking things out of unsecured bags or bins or baskets, even with people around watching. Never parts of the bike, or bikes themselves, just stuff that's not tied down. I still have to make a locking top for the rightside pod.

The only boxes I already had big enough to use are what's on there now, some big old aluminum test equipment boxes. I'd rather make some custom ones with better aerodynamics than boxes and more space than these have, but have so far not had the materials *and* time all at once to do it.

Originally I'd planned for some side-opening boxes under the seat, but haven't had the stuff/time to make those, either.

I have some ideas for a trike version of this that would move the seat significantly forward and put a LOT of cargo space where it is now, plus the side space would still be available.

If I were to build this particular bike completely from scratch, I would also build it with the seat and stuff a bit farther forward, since there is already clearance to the wheel for pedals/feet by a few inches, but I don't trust my welding quite enough yet to do this, which is part of why I used existing bike frames when I built it. :)

I also have a trailer being reworked (it sort of works now but the hitch is problematic in turns, and I have a solution I just have to have time to make):
http://electricle.blogspot.com/2009/05/wheelchair-computerpanel-flatbed_22.html
The post is from before I actually had it made into a functional trailer. I have to get pics and make a post for that, too. Time...where does it go?!?

But do you think it's better to be in the recumbent position?

I find it far far better to be in this position regardless of the other detrimental effects the bike design has because of it. I can't sit on any of the many many saddle types I have tried over the years, not for rides over a few miles. But the recumbent position is perfectly comfortable for my back, bottom, legs, neck *and* arms/wrists, none of which was ever true on any bike I had tried before (even ones that fit me according to the general ways of figuring that sort of thing out)