good news!!!!!!!!!!!
The Spanish dealer is announcing the VX-1 lithium version in his webpage.

Excellent! How much for the upgrade?

Excellent! (that they're quoting a real number for NiMH - shame they had to wait until the LiFePO4 batteries came along to do that).

Just kidding - it is good news that there's an official announcement. Maybe my concerns were misplaced (isn't the first and won't be the last time I'm wrong!)

Excellent! (that they're quoting a real number for NiMH - shame they had to wait until the LiFePO4 batteries came along to do that).
...
...

They still do not quote the "real number".

I think this is just a case of wishful thinking on R's behalf. They still quote 6.8s 0-80km/h for the NiMH version on the Spanish Vectrix site.

It's just that R has has "quoted" a more accurate 8s from his experience, and it seems he chose to believe that the 6.8s claim will be true this time!

Some improvement in acceleration from 0-80km/h could be gained because the Li batteries are lighter and the current draw is not peaking until about 75km/h.

I doubt if the acceleration from 60km/h - 100km/h is still the same, though! It may well be reduced, because the Li batteries may not like the very heavy current draw required for it.

LiPo batteries don't mind current draws of 15C or even up to 25C for bursts. I know, I fly Remote Control Helicopter, where we drain the battery to the 20% SOC in 4 minutes :-)

Edit: Wow, they've gone up to 30C now: http://www.flightpower.co.uk/ProductList.asp?FileB2BCategoriesID=1459318&NewITem=0&BrandType=0&NewItemDays=0
I've been out of the loop for a year ;-)

Sorry, I did not really check what Lithium batteries they are promising.

John mentioned LiFePO4, so I thought is them!

Does that mean that all the safety advantages of LiFePO4 will be missing? More Ooomphhf, but also more risk of fire and explosion, and the need for a very reliable BMS etc?

LiPo batteries won't catch fire as long as you don't charge them to fast (>1C) or overcharge them (>4.2V/cell) or abuse the physically.

What are advantages of LiFePo4? They can charge quicker than LiPo, but with Vectrix charger, charging at 12A max, you're charging a 45Ah pack with 0.27C, so no worries there :-)

But as with any battery... less deeply you discharge them, more battery life you'll get.

Sorry I assumed LiFePO4. My bad. A brief look at the Kokam catalog shows that modern LiPo appears to be improving in safety (note the nail penetration test - in other LiPo batteries they state that caused fire but didn't for the Kokam - and it doesn't cause fire in the LiFePO4s we use).

As always technology is marching rapidly onwards. I shall be more careful in the future. I wonder what the price point of Kokam LiPo's are? Maybe it's time to get some to play with.

Yeah, those I specified above are a nice fit into the Vectrix' battery bay. Width wise, it's a perfect fit.

Very nice. Does anyone have the new specifications? Who have one of these?

I was sure I'd seen a 45Ah lifepo4 battery design from GP batteries that was speculated to be the new vectrix cell.

When will it be available in the U.S.?

I think this is just a teaser, if you would buy one now you would probably have it delivered in Januari.
Which doesn't automatically mean 2011 :-)

I think this is just a teaser.

I'm inclined to agree... If you want Lithium, you'll get it quicker if you DIY.

Astonishing...
I've just come back from the Phebus 2010 and I've discovered that the page announcing the vectrix Lithium has disappeared.

There's at least one guy in vectrix keeping a close eye on this forum... The page is still in cache, I partially recovered it for "historical" purposes ;-). The beautiful picture of the girl with the vectrix has completely gone, but I placed another shot with the same Girl, probably from the same photographic session. 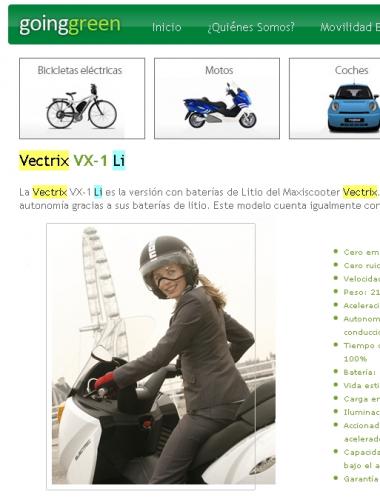 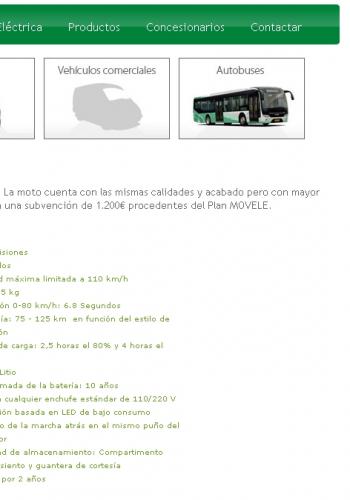 Is vectrix guessing that some NIMH V sells will be lost now if the lithium version is announced? I know a bunch of people in barcelona awaiting for a vectrix with more range.

During the phebus it turned out that my vectrix was the weakest vehicle, talking in therms of range (680 km in 4 days). I could finish the rally in Toulouse thanks to its fast charging capacity...
Despite the Phebus does not represent the general needs of an urban commuter, the electric rally showed that the vectrix has a very low range, at it does need more battery capacity...

pd: The behaviour of my Vectrix in the Albi track was superb, it was as fast as the electric cars.. (with the exception of the Begreen Tesla)

Someone got too much excited...

At least we know it's a reality. I'm looking forward :-)

can everyone go look at my blog and see what you can offer in your great fields of electronics. I want to splice/clip into the poer system to add an external twist-lok pwer-pak that is in my tiny trailer battery-pak I'm a 20 year electrician, with no back ground in what you all can offer here in the electronic field of it all. Help in showing me where to make the connection for extended A.H. power, and what to use in battery numbers.
Cell Propelled Stu

Hi.
At the Intermot in Köln/Cologne in Germany, a member from Vectrix-Forum-Deutschlend took some photos of V´s with Lithium branding! If I get more information I´ll post it here.

Good to see that all the bikes on display have centre stands. Must mean that we can have them soon too!
Also all chrome is gone and instrument panel has a different color setting.
I heard today that lithium is coming available in march 2011. And that trade in could be more interesting than retrofit.

I hope there well be an upgrade option (not too expensive) for the NIMH types.
Greetings Mike

Why are they taking so long? Is there a huge stock on NiMH batteries to sell?

Interesting! I note the article states that there are few cosmetic changes. I however noticed that the motor/encoder cover was in anthracite on the white show bike and the previously chromed covers either side of the rear light were in body colour. And what about that centre stand?! Yes please! I'd like that!

No announced prices (unless Google blew the translation).

Here's the link for the English translation and the text:
http://translate.google.com/translate?js=n&prev=_t&hl=en&ie=UTF-8&layout=2&eotf=1&sl=fr&tl=en&u=http%3A%2F%2Fwww.scooter-infos.c...

Until now run by Ni MH (Nickel metal hydride), the Vectrix maxi-scooter going on today in lithium technology, a new version sold in France next spring. No indication of price yet, but we expect an increase from the current model on sale for € 7850, however, to stay below € 10 000 ...

The power is set at 27 hp and maximum torque of 65 Nm! But the weight goes from 231 to 200 kg, one of the major advantages of lithium is its relative lightness.

Batteries like all the scooter will be guaranteed for 2 years with a lifetime announced 80 000 km or 10 years.

Aesthetically, nothing new to report, except for a shorter bubble.

The project of a "mini" Vectrix is postponed.

A friend asked about the vx1 lithium in Madrid: He was told it may be avaiable next month with overcharge of 700 eur...

Just 700 euro? That doesn't seem that bad to me! I wonder how much for a swap out pack for existing VX1s? And whether there wuld be a Warranty offered with a new Lithium pack?