That's a lot of prefix .. for .. demonstrating taking my Karmann Ghia to Fry's to try out the charging station there.

I bought an AVCON adaptor box from the EAA last year. It has a claw style AVCON inlet on one side of the box, and a NEMA 14-50 socket on the other side. The NEMA 14-50 is the 240v 50A outlet you might have seen at RV parks or any place needing large amounts of electricity (10kw max).

The charger in my Karmann Ghia is an Elcon PFC3000 and it came with a NEMA 6-20 plug on the end of the wire. I didn't know all these plug numbers until getting the charger and it was confusing when I unpacked the charger. The 6-20 plug looks enough like a regular 120v power plug that's what I thought it was, until I went to plug it into a socket and it wouldn't fit. A trip to Lowes and I got a bit of an education into sockets and plugs, and I found a website somewhere that has an excellent reference section on ALL the plugs and sockets in use in the U.S.A.

NEMA 6-20 is wholly different than NEMA 14-50. The 6-20 socket is three connectors (two hots and a ground) while the 14-50 is four (two hots, a ground and a neutral). In the EAA AVCON converter box they connected to the two hots and ground on the 14-50 leaving the neutral unconnected.

This means it was easy to build a converter cable with a NEMA 14-50 plug on one end (to plug into the AVCON converter), and a NEMA 6-20 socket at the other end (to let the charger plug into the converter cable). It may violate some kind of electrical code or something but I don't plan to let this get outside my car. Obviously taking 50A off the 14-50 to send through the 6-20 socket (rated for 20A) would be a bad idea. 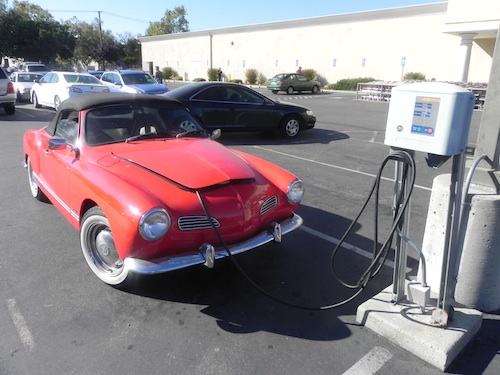 Here's my car connected to the charging station. All the wiring is under the closed hood.

While hooking everything up a couple people stopped to chat with me about the car. That was nice. 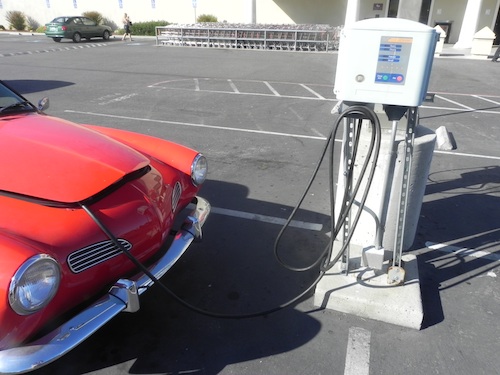 Another view of the station & car 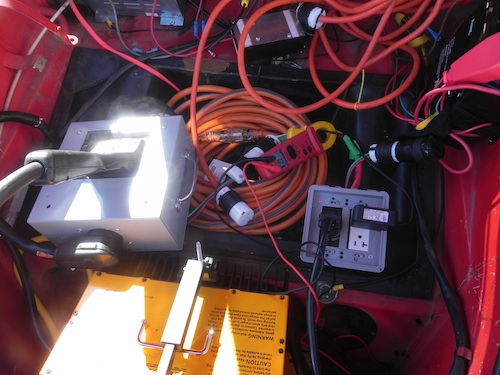 I have an AC clamp on meter that's shown reading amps flowing through the cable - and it's receiving 12A from the charging station.

At the bottom of the pile is a 50 foot 10ga 120v extension cord that I intend to use whenever I'm in the field and a 120v outlet is the only option. The 10ga cord was expensive but necessary to enable sending enough current to the charger. 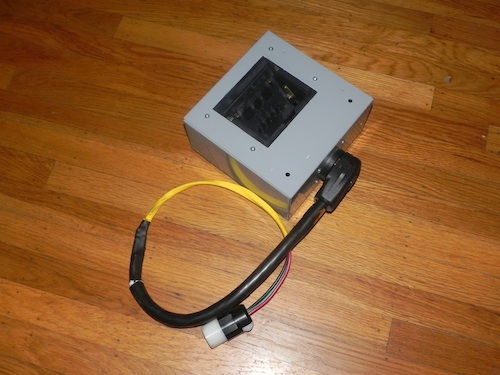 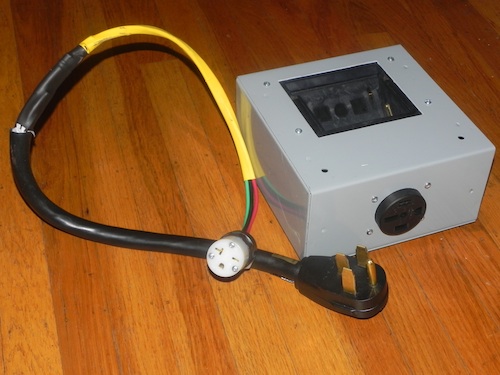 With everything unplugged so you can see it all.

I thought real hard about installing a NEMA 6-20 socket on the converter box in place of the 14-50 socket. It would remove the need for the adaptor cord. BUT if I were to be at an RV park with the car or other place with a 14-50 outlet I'll want to have an 14-50 adapter cord. Yes?

What is the "NEW" industry standard for charging? Is it the SAE J-1772 that is on the Chrevrolet volt? Can the Level 1 or the Level 2 charger charge the Nisson Leaf or the Chrvrolet Volt for purposes of "Fueling up"? Leviton sells a unit but it is expensive. I'd like to have one charger and maybe a few cars of different pack voltages and one charge port, whether it be Level 1 or Level 2.

First of all, love the Ghia. Very nice.

Let's see if I can answer this too. Didn't know what reply button goes to what sender. I bought my J-1772 at the Chevy dealer. Part number 2282289 for $125.00 from MI I think to MacMulkin in Nashua NH.I got my plug part from Leviton in NY. But there are cheaper plugs on the world wide web. Modular Power is onw.TucsonEV.com is another one. The Level one charger from GM part number is 22860931 $540.00 . Get the wiring instruxtions off the web in order to standardize wiring. Blue wire is critical and so is sense circuit. David, I think you went all out on your design of your VW. Nice. Very impressive. David, are you using J-1772 charging or NEMA 14-50 or Avcon as of Nov 2011?

IB Scootn, I too want to charge my VX-1 with the charger. Along with the KIA, and MR-2. isotrotron stealth antenna

I ordered the J1772 converter box, but haven't received it yet, so I need to circle back with the vendor to see what's up. This means I haven't been able to try out that charging mode yet, only the AVCON shown above.

For a conversion vehicle we want to accept a J1772 plug and interface to the on-board charger. The public J1772 charging station network is wired for 240 volts. This means you'll get 240 volts out of the J1772 plug. Hence your on-board charger has to work with both 120v and 240v.

The Elcon charger I have does work with both voltages. Its problem is that Elcon configured it to draw 19 amps at 120 volts, which maximizes the charge rate at 120v but has the unfortunate side effect of tripping most circuit breakers because most 120v circuits have a 15A breaker or else have other things on the circuit. I'm planning to send the charger back to Elcon so they can turn the 120v side down to 15A or less.

Unfortunately my car has been in the shop the last 2 months with a blown up transmission.

I recently stayed in a hotel where the A/C unit used a NEMA 6-20 plug.

It's a little hard to see what's connected to what in that photo and I don't know if that coiled orange cable is connected, but I'd avoid running power through a coiled cable. Particularly at these high currents, you're asking for a melting or fire.

The coiled orange cable is a 10ga 120v cable that wasn't being used at that time, it simply gets stored in the trunk.

Yes, IB, that's what that one cord is. At Home Depot etc they have NEMA 14-50 cords that end in ring terminals and use 8ga wire. What I did was cut off the ring terminals, adapt the 8ga wire down to 10ga, leave the neutral un-attached, and attach the two hots and ground into a 5-15 socket. Very simple to do.

Of course your charger must be capable of 240v. Not all chargers are.

I would start a new thread to discuss this connector you got ... and, no, haven't gotten my converter yet, so today I hope to find time to call the credit card company to get them to cancel the sale.

The Chevy Volt doesn't draw 30 Amps from a J1772 connection from what I can tell, so they can use smaller wires. Couldn't find the actual Volt charger spec easily. Don't use this connector for 30 Amps if it is in fact as you describe!

I have 2 of the http://modularevpower.com/ J1772 to NEMA 14-50 adpaters that are rated up to 50 Amps. Got prompt delivery, high quality units and both work flawlessly. No hassles.

The J1772 standard does not have a neutral connection:

The round 43 mm diameter connector has five pins, with 3 different pin sizes

Control Pilot - Communication line used to coordinate charging level between the car and the charger as well as other information.

Also note that there is a grant in California to upgrade many of the Avcon stations to J1772. So it's best to get the Avcon station upgraded to J1772 and put a J1772 socket on your vehicle (or use a J1772 adapter if your vehicle needs that.) J1772 charging stations already far outnumber Avcons and the existing Avcons will likely be upgraded to J1772 in the coming year or so. The Avcon stations will not be maintained. If there's an Avcon you need to use and you have an Avcon adapter already or don't mind spending the money for an Avcon adpater that will be useless in a couple years, then you might get an Avcon adapter. You'll definitely want a J1772 connector (assuming you can deal with the J1772 being 120V or 240V, but not both from the same charging station.)

EV,
Thanks for the clarification. I will start another thread on SAE J1772 fast charging. Under that link, I would like to ask if you know whether the J1772 station is looking at the power factor of the load?

You CAN get 120 vac from a 240 volt J1772 adaptor, by installing an AUTOTRANSFORMER! This device is a single winding transformer type inductor, having a centertapped winding. Such a device is available from TOROID CORP. os Salisbury, Maryland and others. Get a device rated to handle 2,000 watts, with 240 volts input across the winding, and connect each winding end thru a 10 amp fuse, to the J1772 HOT terminals. Your 120 volt outlet HOT wire connects to either end of the toroid, the 120 volt NEUTRAL connects to the toroid center tap, and the 120 volt GROUND connects to the J1772 GROUND. This creates a NEUTRAL, and reduces the voltage, while keerping "Ground Fault Detection" happy! (Using a toroidial autotransformer enables this to be done with better efficiency, smaller size, and less weight than a typical 2 winding transformer.) IF your 120 volt power needs are less than 1,500 watts, a proportionally SMALLER autotransformer can be used, with smaller fuses to the 240 volt HOT leads--3 amp fuses, and a 500 watt autotransformer, to charge an electric bicycle/scooter requiring less than 500 watts, for example.