I'll start by saying, I love my Bionx equipped mt. bike. I ride to work almost every day and about 6 months ago I had ~4k miles on my first PL-350.
That's about 400 charge cycles but my typical ride uses only 60-70% of the pack according the controller SOC indicator. So 6 months ago the Bionx up and quit. Turns out it was the battery but the dealer said the controller may also be bad. Recommends replacing the whole kit.
Kinda surprised since my charge cycles weren't that deep. Figured it would last longer. I really wasn't excited about $1000 to replace just the pack with the risk that something else could still be wrong.
Plus my system is the old I2C not the newer CAN-bus. I found a dealer who would sell me the whole PL-350 kit for $1k. The caveat was that it was a demo unit, no warranty with about 40 miles on it. Bought it, installed it and it lasts me maybe 20 rides before it starts showing serious degradation (won't fully charge, voltage sags). I talk to Bionx and they say any Pl-350 pack unit that's been on the shelf since 2008-9 is probably degraded. That sucks.

I decide to hack a battery pack into my old pack. I want something safer than LiPo though. No need to burn down the garage. So I find A123 cells online through some Hong Kong dealer (I know.. very risky purchase). Plus they do tabs and will weld any config of serial/parallel I want. I like A123 since they're a pretty safe chemistry and have great power if not so great energy density. Bought 60 cells welded as 12 serial to yield 39.6 V nominal. I then soldered the old Bionx batt wires from the controller to the 5 packs in parallel. The LiMn pack in Bionx PL-350 is 60 cells connected as 10S6P. 10 LiMn is roughly equal to the 12 A123 cells in voltage. In fact with the Bionx charger I verified I never get close to the 3.7 V/cell max for A123.

Did some crude cell balancing before putting the pack together. Discharging each string and checking individual cell voltages and then charging with the Bionx. All looked kosher. The pack has been working great for my ride.
Only 20 trips so far. I measured the total Ah and it comes in about 3 Ah round trip. So the Bionx pack wasn't giving me close to 9Ah since it always ended with less than half SOC. Kind of a mystery.
So any estimates on whether this hack is going to die a premature death?
If I can get 400 cycles again I'll be a happy camper. It's only 5Ah but should be fine for my daily ride.
This pack cost me $165, including welding and shipping.

Glad to see someone attempting to get around the expensive battery Bionx issue.
I love Bionx but i have the same issue.
I am trying to replace the cells with the original cells found in Makita packs.
I like your approach, but there may be a problem with regen current.
Have you tried going down a steep hill and using Regen? It may blow the internal controller.
I sure hope it doesn't but that is what we need to know before everyone jumps to this mod.
I do hope it works out for you.
I plan on documenting my cell replacement project at Endless sphere.
Jim

I have done a steep hill with regen and I have my regen dialed up to around '60' I think. I use a Watts Up device to monitor my V,I,P,E and it seems I max'd out at ~10A during my regen test. Is your concern based on the A123 cells low resistance and high power input/output? I was hoping if this was an issue, the 30A fuse would blow, not the controller. Do you have an estimate for the max regen current the controller can safely handle? I'll try to do another test today and get a better measurement.
Thanks for the heads up.
p.s. It wasn't clear in my post, but these are A123 18650 cells I'm using. Tempted to try some 26650s also.

Well, I have no first hand experience. I tried to go thru the threads on Endless Sphere but I can't find the reference.
Ken at It's electric described the issue with using different cells and the implication on regen and concluded you needed to do a firmware change (which is not possible) to make it work.
But hey...you can't argue with success.
So keep doing what you are doing and keep us posted!
Have a read thru this thread and you will see. Ken claims the current on regen could be as high as 60 amps.
http://endless-sphere.com/forums/viewtopic.php?f=2&t=18954&hilit=bionx+regen
Jim

Thanks for the links. Interesting issue. Seems very odd to me that a 60A regen can happen when the fuse to the battery (on my 2008 era pack) is 30A.
It's not a slow blow fuse.
In any case, I measured my max regen for my two biggest downhills on my way home. Cruising at 27 mph and then slamming the regen on at the bottom for about
10-12 secs yielded about 8.5A max and 345Wpeak. I can't imagine getting to 60A. I wonder if the guy confused Amps with Volts. With enough speed, it seems possible to get a voltage spike in that range. My max voltage on my regen test was 42.8V.

So, I think I'm safe as far as regen goes for my ride. I suspect the biggest issue I need to watch for is no BMS on this A123 pack. I'll be monitoring the cells carefully over the next 20-30 cycles to see how well they stay balanced. I think I'm greatly helped by the fact that I don't need to pull to much energy from the pack. I have two big hills for which I need lots of power, but the A123 cells are ideal for this. Plus my charge/discharge will keep the individual cells between 3.5 and 3.1V which should help the life.

I'll keep checking and look for signs of gradual problems -- or sudden smoke!
Maybe I'll post something on endless-sphere after I get a few more miles on the system. 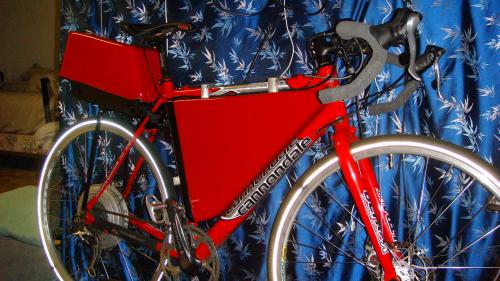 Here is my version of the bionx battery hack

Wow! Nice configuration? That's some serious Watt-hours. About 15Ah at 39V?
Did you keep the Bionx controller? How many miles / cycles on the pack? 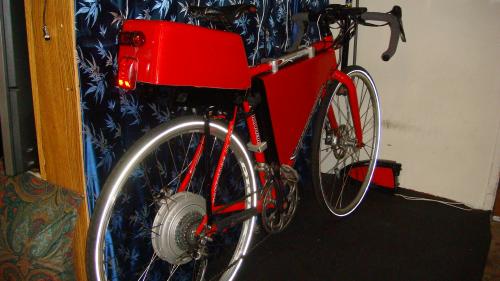 Could you please post exactly the details of your mod. I would love to see what and how you did it.
It is very impressive and I think the BIONX with the pedal assist is tops!
Maybe just your wiring diagram would get me going.
Thanks
Jim 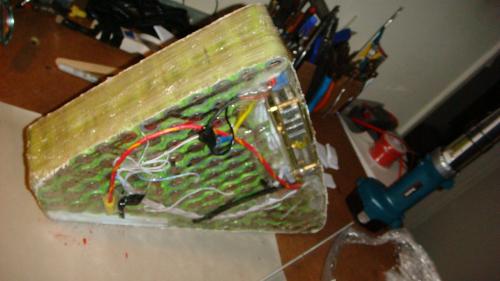 No, but what I will do is respond to any exact wiring diagrams you may post with respect to your mods..
Also, I will post suggestions and pictures of which I have plenty.

Very nice work. Have you ever tried running that system at 48v? I have a bionx 350 and when my batteries need replacing I was thinking of going to 48v. My system is the 2008 model.

This is my baby. 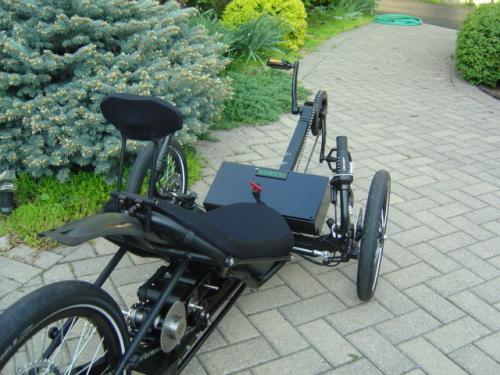 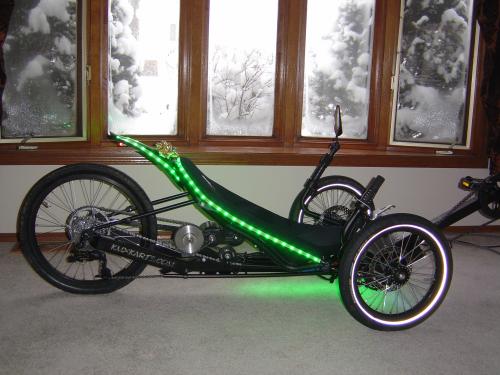 Very nice rig, really like what you've done. Thank you for posting pictures.
The Bionx will not run at 48 volts. At about 45-46 volts a voltage regulator
chip burns out on the board. I've replaced this same chip 3 times when using
a ping battery that topped out at about 45 volts. Since using my new A123 packs
which charge out to 44 volts no more problems. It's been well over a year! 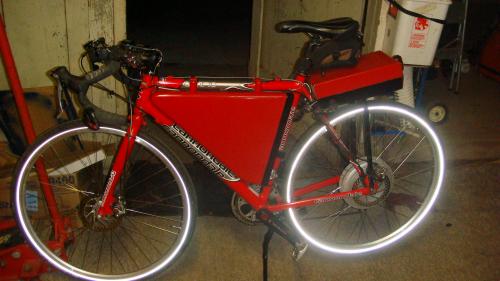 Very nice! Thanks for the info.
Bill

http://visforvoltage.org/blog-entry/202-dahon-mu-sl-folding-bicycle-bionx-pl350-kit
I was the guy that blew the the chip in the battery case & then the controller chip in the 500W motor.
pics of the mod:

I guess since all the new Bionx kits are no longer using the old controller in the motor & board in the battery box
I can now dispel the false rumors without any risk of libel...

This is my account of what happened with the after market mod.
I mailed my spent batteries that would not hold 1/2 a charge to Ken to modify & I purchased 4 of his LiFePO4 38.4V 10Ah packs to run in parallel.
When I received the mod from Ken. I plugged everything up & took it for a long hilly test ride.

Everything was fine until I hit a long downhill that is capable of propelling a non-motorized bicycle at 50+ miles per hour coasting in a tuck.
I tried to use full level four regen to slow the bike & to test the regen of the modded system.
It was a short test = ) ...about 15-20 yards down the hill the consol went blank. Later we found that something blew at the chip inside the battery case &
it was not the fuse : )

I sent another stock Bionx battery that was only holding a little over half a charge to Ken to mod. That 2nd stock battery had a faulty regen system after I got into
a slight spill & dropped the bike, the regen no longer works with that particular battery. So I thought that board would be perfect to use for the 4 after market
LiFePO4 batteries.

After I received the modded battery box without the stock batteries, I took it for a spin. I worked like a charm, everything works with that mod except for regen.
detailed here: http://www.endless-sphere.com/forums/viewtopic.php?f=4&t=5347&p=215589&hilit=bionx+hack#p215589
This is my account of the 60+ "Volt" spike that blew the controller inside the motor. I put the bike on the stand to see how fast I can spin the wheel off the ground
. When the after market batteries where plugged into the system, I noticed that it acted like a brake on the direct drive hub motor. I was not able to spin the wheel with the
Schlumpf HS drive at high gear to no more than 45-48 mph. Then I tried to spin the wheel with the batteries unplugged...

It was pretty amazing, as I spun the cranks the unplugged motor turned into a generator & the consol powered up, I was trying to keep an eye on both the consol for the wheel speed & on the
Watts up meter display...

The speed increased steadily as the speed went about 48 miles per hour the regen voltage went up to about 42-46 "Volts"...sorry was too busy with the speed & Volts to pay attention to amp output...
as the wheel speed approached 60 mph to Voltage spiked & the last reading I saw before the controller in the motor blew was in excess of 60 "Volts" & it was lights out...end of story = )

Hey Dennis,
A note about pre canbus bionx controller. There is a power up glich that allows the regen to over voltage past the 43 volt threshold.
Looks like your controller either has this glich or is aways allowing regen voltage to exceed 43 volts. For me just turning the system
off and back on usually fixes over volt regen. Have you repaired you damaged controller??
Jim 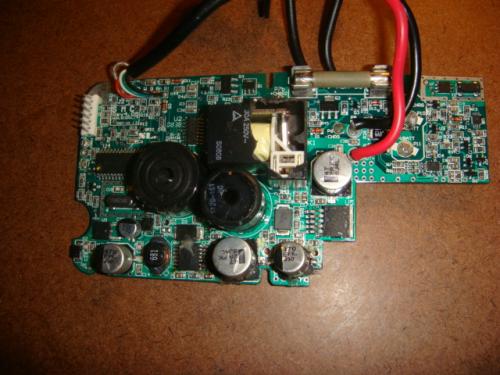