How many miles on your bike? Still using it?

I've got little under 550 miles on my bike, and battery capacity has decreased below 75%, quickly dropping to 50% when charging it with the stock a5AMP charger.
I bought a 3AMP charger, which takes longer to charge, but the battery holds charge better with that charger.

I think I have driven it a while, but am well under 10% of 700 recharge cycles, and it's already lost so much charge.
I'll be looking into the option to send it back to the company, and get the battery measured.

I heard I got 1 year of warranty on the battery. If they could recondition it, or give me a new one, it'll give me another 6-9 months to before I'm back in this same situation again.

Any ideas how expensive it will be to ship a battery?

Pack life is certainly the make-or-break part of the economics of using one of these scoots.

My Lead-acid XB600 is doing well on its second battery pack; I got about 2 1/2 years on the first one - perhaps 500 recharges. I have, however, used a parallel charging setup, with the total amps for all four batteries at 2.5A.

I would only use a Lion pack with cell-level battery management at the Prius level of sophistication. Has anyone else seen another way to ensure pack life?

When I bought my first ebike kit it came with lead acid batteries and a 5A charger. I was supposed to get 500 cycles out of it but in reality I got 16 cycles before the lead acid battery had lost about 70% charge capacity. Then I went and bought a PING lithium battery and now, 4 years later is still around 95% capacity and nearly 9000km on the electric push bike with no problems at all.

There is no secret why batteries last so long in hybrids - electronics turns them off at 50% - 70% State of Discharge.
Anyway I assume you don't ask only about escooters in the title of your hread.
So my Tidal FORCE ebicycle JUST CROSSED 22,500 km of millage through heat, winter subzero temperatures, pouring rains many times,of course NOT on original battery.
I ride at MINIMUM 330 days in a year in climate of central Canada.
TF is a legend for a reason.

I'm still running the original stock batteries 5.5 years and 25,000 km later on my XB-600 e-bike. The solution for me was the 60v mod. I added another 12v battery (charged separately) in series to my stock 48v 4-pack. Now that my stock batteries hold ~10V each, I'd like to add yet another new battery in series......which brings me to my next question. What is the cheapest way to maintain a max. 60V output across the circuit once I add the next battery (so I don't fry my controller, dc-dc converter, or my ego)? Cheers.

I've never had any trouble with that, from my 48 volt lepton, through my 60 volt X-Treme XM-3000 (up for sale - needs controller) to my ZEV 5000LA. I've always done a 'pre-charge' before riding; maybe this is the secret to balancing a series lead-based pack...

I'm glad you were lucky. I would still advise new EV'ers to do everything they can to fill each battery equally, and to avoid overcharging.

Equalizing charges by overcharging is a perfectly valid strategy with floodies: excess charge decomposes the water in the electrolyte which can easily be replaced, but AGM lead acid cells cannot be refilled.

That's all true, but in my book experience trumps theory, and I don't think you can call it "lucky" that I've gotten very good results with three out of three vehicles, using pre-charging to equalize. It's also worth noting that I am *not* a lucky man! Read my experiences here with my ZEV 5000LA if you don't believe me. It might work less well with vehicles being used daily, because of higher electrolyte evaporation, but for the typical EV scooter rider I think it's worth trying.

Moral of the story, ditch lead and get a good lithium battery with a BMS.

I think that to determine the 'moral of the story' we'd need to know how top-shelve lead packs fare against medium and top-shelf lithium packs. If you want something to compare the cheap SLA batteries most mopeds and E-bikes come with to something, it should be the cheap lithium packs on entry-level lithium E-bikes, not the wonderful but expensive Ping packs (I am now using one as well, on my EZIP - love it.) and Nissan's flawed but still highly-engineered and expensive LiMn pack in the Leaf (I have one of those now, too, and also love it.) I still maintain that if you want to actually be able to afford a scooter, lead-silicone batteries provide a better cost/benefit ratio and better reliability than the typical lithium pack. For cars SLA or SLS batteries are just too heavy and not energy dense enough for anything but a NEV, but for two-wheelers they can still be a cost effective option that can also be more reliable.

I am completely new to electronic bikes, but not new to the world of modified vehicles. I have a major problem and I think this thread may be able to help. I purchased my XB - 502 in july of 2011. I used it every day doing between 15 and 25 mile trips on a single charge up until december of 2011. I then stored it for almost a year and began using it again in nov 2012. I instantly noticed a lower range than normal. I again stored it only using it maybe once a month until this Aug. I purchased a brand new battery from X-treme scooters and when I started using it I noticed that I did not have the range I should of with a new battery. I have been left on the road pushing it the past 2 days after maybe 8 miles. Please give me suggestions. Do you think I got the wrong battery from the dealer? Is my motor going? Should I get a new charger (oem or upgraded)? should I add one of the old batteries to the daisy chain of new batteries? I know its a lot of questions, but I need this bike to go more than 10 miles round trip starting monday so I am open to any suggestions. 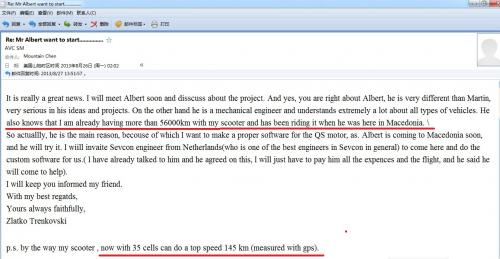 I just bought my XB-610 over the summer to replace my car. I have been riding to work and back everyday and going places on weekends. I do notice that it's slower and doesn't last as long as when I first bought it. Is that normal?

Lead or Lithium battery? And have you been riding it into colder weather now than in the summer?

Battery balance is the big cause of premature battery death. My early posts on this thread cover my thoughts on this. They haven't changed.

If your pack is not performing well, a load test while monitoring INDIVIDUAL battery voltages will almost certainly show ONE battery dropping out early. Only a) a sophisticated BMS system or 2) for lead-acid, a parallel charging system -- can proportion charge provided to individual battery need.

But in the case of sealed AGM lead acid batteries, there is no way to balance the six individual cells in each battery - even with parallel 12-volt charging. The failure mode of all the AGM's (and the so-called "silicone" batteries) I had in my days before going to lithium was imbalance and failure of a single cell in the battery.

Sealed lead-acid batterys are a fairly poor choice for an EV of any sort - they are more suited for infrequent cycle standby applications. If I had to go back to lead-acid, I would consider flooded lead acid (which can be equalization charged) and be very careful to not tip the scooter over.