Any SoCal help for switching to The Laird's software?

Be careful, if you have the wrong charger and you try to upgrade the firmware, your vectrix will be a doorstop. if you have a sccoterdiag that does not install, the MC upgrade may halt (doorstop again)
If nobody with experience lives nearby you location, you should contact directly the laird.

Is there a way I can check the charger version to make sure it's compatible? 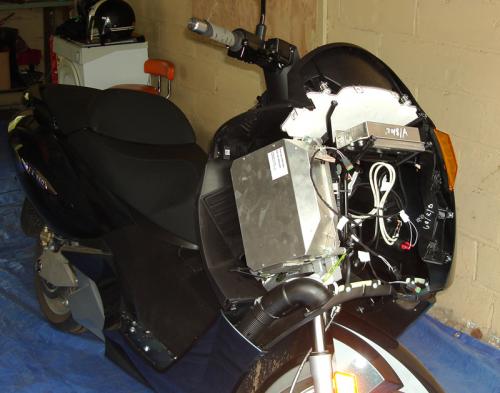 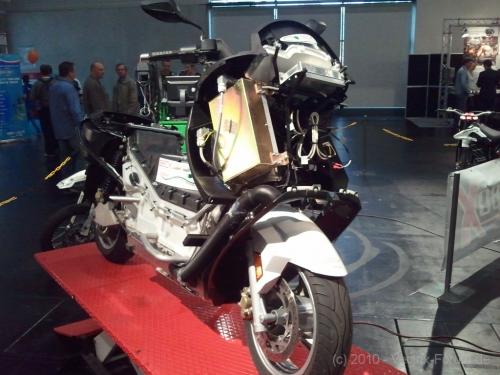 Ok cool, I'm pretty sure I have the Aluminum.

So SoCal Vectrix, are you out there??

I recently updated my '07 Vectrix to the Laird firmware and had some issues, which luckily I managed to resolve. The directions were OK, but there were some repeated sections (just ignore them) and there were small errors that if you read past them should be obvious.

I had a problem installing the Scooter Diag software - missing DLLs. Here is what my issues were:

(1) Following the Laird's installation instructions to the letter, all was good until and including installing the PEAK drivers so my laptop would see the CANbus adapter (solid red light on the adapter). Problem was that I could not get the ScooterDiag program to run. I got an error message that said that the "msvcp71.dll" was missing. After some google time, it turns out this is some Microsoft-provided library that could be coped from other locations on the computer. This I did - just searched my hard drive for it and found several versions of it. I used one that was in the folder for some camera software that I had on my computer - copied that and pasted it in the ScooterDiag folder where the scooterdiag.exe is. There is already a similarly named file there, "msvcr71.dll", which I did not touch. At this point, the ScooterDiag would start without errors.

(2) The ScooterDiag was not seeing the CANbus - red in the status window. On Visiforvoltage I had seen a thread about that issue and the solution there worked for me too:

(b) Get a different version of it from the PEAK web site and save it in the ScooterDiag folder where the renamed DLL is. The address to get it from is this: http://www.peak-system.com/produktcd/Develop/PC%20interfaces/Windows/PCAN-Light%20API/Win32/PCAN_USB.dll

That's it - now the software shows green in the status area and sees the CANBus.
If you run into the same issue, email me and I can email you the DLLs that worked for me.

The update is a quick process, once you have the software configured. Each of the 2 uploads takes less than a minute. That information was missing from the instructions, so I did not know how long it is supposed to take and was apprehensive if my laptop's battery would hold long enough (was not an issue at all).

Hoping this question isn't too dumb: is the CANBUS adapter connected to the scooter while trying to configure it/working on red light-->green light?

is the CANBUS adapter connected to the scooter while trying to configure it/working on red light-->green light?

Make sure the computer AND the bike are not plugged into power at the same time as it may damage the computer, if your adapter is not opto isolated (mine isn't). So, charge the bike and your laptop before the update.

The "green light" is a half inch rectangular status field on the ScooterDiag software screen on the laptop. The light on my adapter box is a small round red one. The first part of the instructions deal with the adapter being hooked up to the computer only, in order to install the USB driver from the Peak CD that came with the adapter (or a download the contents of the CD from the web off Peak's web site if your laptop does not have a DVD rom drive, like mine did not). Once the Peak software is installed, The Laird's instructions mention to click some icon on the desktop that did not exist for me - I just started the Peak software from the Windows Start menu instead. At this point, of your installation of the Peak software is happy, the adapter should blink the ted light. If not, replace the Peak USB driver as described above. After you successfully install the Peak software, now, proceed with the second part of the instructions and install the ScooterDiag software. Again, no connection to the bike het, first make sure the ScooterDiag is installed without error and you can start the software OK. Once this is done, stop the software, only then connect to the bike and start ScooterDiag to see if it sees the CANBus or not.

The workwrounds in my previous post above should probably not be necessary in the general case on a Windows XP machine, but for some reason were needed on mine with Windows 7.

Josh, worth noting when you receive the CANbus adapter from Steev, there's no cable with it - I just used a male-to-male d-sub connector that I had lying around instead. So you have to plug the CANbus adapter directly into the connector in the glovebox. It's a little finnicky but you can still see the red light.

Buy an extension cable for the CAN-BUS from Frys or Amazon. Worth the money!

I'm having trouble finding the right cable. Is this what I should be looking for:

No, this is the wrong cable. The Vectrix plug is a 9-pin (D-sub) connector. This is what the cable looks like from PEAK:

There are two flavors "terminated" and "non-terminated" - they look the same from the outside. As mentioned, I've seen reports that either will work. It's just an extension cable with Male connectors on both ends. The Adapter and the Vectrix are both female, so you can't directly plug the Adapter to the Scooter without a Female to Male converter, which this cable does for you and gives you some working space rather than having to plug directly inside the glove box and having to hold the laptop precariously nearby as JimmyB says you could with his device.

Wait, i thought it had to be a male to male cable. Is Kocho wrong?

The cable has two male ends. It connects to female Adapter and to female Vectrix.

I think the right term is male to male (as in the cable having two male ends), but if you think from the perspective of connecting two female devices ... You get the idea.

The photo above of the "female to female" cable is correct - it shows two male ends.

Wiring looks right - the important wording is "straight through, not a null modem cable".

I have recently got an old vx1 with dead NiMH batteries.

Now I'm going to insert Nisan modules and after

Scooter diagnostics 1.1
Scooter giagnistics 2.1
And latest laird's team softwares with instructions if possible.
I have an Esd Charger and know for sure all the temps readings are all over so will be doing a delete.
I will be really greatful if anyone can send me these files so I can get started as excited to get stuck in.
Regards
J
P.s Also I've been trying to get added to the vectrix GB group in Facebook if anyone can let admin know as keep getting not accepted.

@leafnut are you positive the batteries are really "dead" the NiMH batteries are extremely hard to actually kill. It is far more likely that they have simply discharged to a level that is too low to power the charger and electronics. I had a VX-1 in a similar situation and was able to trickle charge it using two LED drivers wired in series and now it runs like a champ. Might be worth giving it a try if you don't need the extra range of a lithium conversion. This would also keep the battery tech much simpler. Charging lithium cells is much more complicated and discharging them too far will definitely damage them (unlike NiMH)

Out of curiosity, how did you wire in the Nissan Leaf modules, and how many did you use? I purchased 19 modules and busbars from Tech Direct Club in California and will soon need to figure out what wiring I need to scavenge from the original NiMH battery packs.

Checkout Ben Nelson’s blog (300mpg.org). He blogged about installing Leaf modules. He also did a YouTube series on it