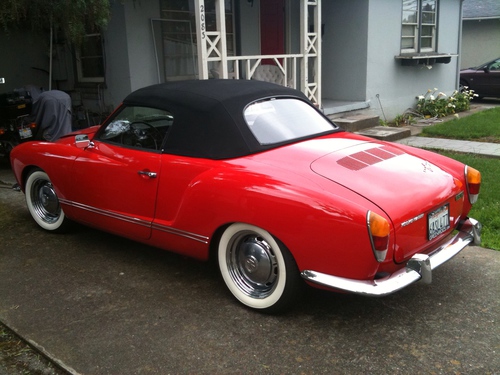 Due to life circumstances, I need to sell my beloved Karmann Ghia conversion. You can see details on the car @ http://ekarmann.com

It has a Netgain Impulse 9 motor mounted to the normal VW 4-speed transmission, along with a custom hydraulic clutch pedal. Currently I drive it in 3rd, but have experimented with other gearing patterns. For instance starting off the line in 2nd, then shifting to 4th when at speed makes sense in some cases. It can get to 80 miles/hr and handle itself well on the highway.

The controller is a Kelly KDHD-14800, rated for 800 amps. It's mounted to a huge heatsink that's in turn mounted directly underneath the vents on the rear hood. The result also looks very cool when showing the car to people. Unfortunately I think the controller needs to be replaced - the only flaw in the car is that the performance isn't what it had been a couple years ago, I'd tried debugging what's going on and the only remaining culprit is the controller. It gets hot during use, while in the past it remained cool even after 30+ miles on the highway.

The battery pack is a 144 volt 45 cell 100 amp-hour ThunderSky system, in a custom box designed by Lightning Motorcycle. The BMS is their design as well. It does balancing during charging and can control the charger (a Manzanita PFC40) to ensure the pack isn't overcharged. There is a feature to adjust the throttle if the pack is too low, but we didn't hook that up. You'll have to contact Lightning to see how to do it if you want that feature. The BMS has an information display for the driver to see battery pack conditions while driving. I don't see any weakness in the battery pack. I'll include one spare cell that was weak, which I replaced.

The Manzanita PFC40 can, in the right conditions, charge the car in about 2 hours after driving 45 miles or so. The charger is of course very adjustable, automatically handling 120 volt or 240 volt, and with the convenient knob you can use any power outlet and get up to 40 amps (or so) charging rate. I'll include a fleet of adapter cords that includes a modern J1772 adapter, as well as an old-school AVCON adapter.

The rear seat area was not sacrificed to hold a battery pack. It's available as a seat, but I used it as a cargo area. The front trunk has the charging equipment, and there is a bit of room to hold some cargo.

The top is in perfect condition, and makes for a very nice riding experience in the right weather.

The exterior is flawless other than the white-walls not quite being pure white any longer. While I never kept it garaged, I always had it covered. People always stop to gawk at the car and have told me so many stories about their own Karmann Ghia experiences. And then they get impressed about it being electric. Or else they see the ELECTRIC logo on the rear and want to ask about that. In any case, the car creates conversation everywhere I drive it.

The interior is pretty close to original VW, appropriate Karmann Ghia logo's on the right places and so on. I recently put in some nice floormats and modern seat belts.

I've invested over $20,000 in creating this car. I started driving it in its current state in september 2011. Prior to that it had a Wilderness Electric 72 volt conversion kit installed, barely got 50 miles/hr and barely 10 miles range. Included is the Hydrometer that came with the car which I kept as a souvenir to remind me about lead-acid battery maintenance.

Oh my, your beloved Karman Ghia needs to go! That is very unfortunate :-( I hope it finds a good home!

I assume that it a sunny-warm-weather car only - it has no provisions for heat and defogging/defrosting? Is the blower at least still operable?

Well, I've driven it on many cold days - but you're right, there's no defogging capability other than rolling down the windows. Here in California the winters are pretty mild, especially now that global warming is setting in. This winter there wasn't any real cold snap at all.

It's fine in the rain, for that matter.

Yeah, but even in a hot humid summer day thunderstorm (something also rare in your neck of the woods too) you need windshield defogging especially if you get in the car in damp clothes. Did Karmann Ghias have a heater fan, or did they just rely on warm air ducted from the engine cooling cowl? I recall in the older beetles the heat was controlled by a lever on the floor under the right-front corner of the seat and it would blow really hot air from under the seat on your right leg.

There must be a way to rig heat to it - although it might be fossil-fuel powered (propane).

But I don't want to lead you on that I'm a serious buyer - surely there is someone in your area who will give you the full asking price. I was considering a Think City for a while until I learned that they are basically the Vectrix of the 4-wheel EV world - but with design flaws that are a whole lot more difficult to work around, and no software Lairds with a fix on the horizon. Nonetheless a guy in California recently sold his Think for $10K.

There's a kind of vent along the base of front window where a heating unit could be rigged, but there's nothing there underneath the vent. I'm running some wiring through that vent ;-)

There's wires embedded in the back window, that I never bothered to hook up, and if they still work would serve to clear the rear window.

There are some levers next to the seats. But there's no infernal combustion engine from which to draw heat, and in any case one of those vents is being used as a channel for wiring ;-)

On the EV Tradin Post website, among the cars listed is one from Maryland where they list both the heater and AC units. Maryland obviously has a fuller range of weather than we do in the SF Bay Area

"1500 watt ceramic heater" -- I've heard that Harbor Freight has a competent heater like that, and retrofitting it for DC power is simple.

BTW, I have an album of pictures:-

The last 50ish of those are interior shots made a couple days ago. The others are from various stages of owning the car, and I'm coming up on the 5 year anniversary

"Masterflux AC unit" -- Don't know anything about that ...

The batteries and motor must get warm while operating the vehicle...There is your source of heat!
Just needs a fan and some ductwork.