Is my VX-1 confused?

Bit of a long post, but bear with me.

The MOT on my VX-1 is due in a few days time so I thought it would be a good idea to take my VX-1 out of the garage for a few trips to make sure everything is in working order and nothing obvious at fault.

I don't ride my VX-1 much these days, so every few weeks my routine involves switching on to check the state of charge, operating the light and indicator switches, brake levers, putting in to 'GO' mode and running on the centre stand for a few blips on the throttle. I also check/adjust tyres pressures every month or so.

About 10 days ago the battery pack was around 128V so it was time for a recharge. I haven't done a deep discharge to the red light for ages owing to not riding much. I plugged in, everything was normal, fans started up and charging commenced. I checked periodically throughout the charging session and everything was fine - stable low temperature, no error messages or warning lights. The centre display showed CC153 and towards the end I believe it was at 152 on the left display at 20°C. I left it to complete the charge until the end. At the end of the charge session, I switched on to check the voltage which was around 147V - 148V with 1 or 2 bars missing from the display on the right.

Fast forward to this evening when I decided to go for a quick local ride. I knew I wouldn't be able to get full power and range straight away as it has been sat almost dormant for some time. I switched on, checked the voltage which was 137V and a few bars on the state of charge display was now missing. After a few seconds I got the red flashing battery light. I flipped the kill switch, pulled the left brake lever and the temperature was showing 28°C although ambient air temperature was around 16°C. I kept speeds low and stopped a few times to check voltage and battery temperature. Each time I checked, the voltage was slowly getting lower but the temperature stayed the same.

I covered 6.1 miles and voltage was hovering around 130V - 131V at 28°C all the while with a red flashing battery light. I remained seated on my VX-1 with it switched on to see if anything would change. Suddenly the yellow wrench symbol started to flash at the same time as the battery light and then the temperature warning light lit up constant. All 3 lights went off at the same time a few seconds later. Then, I got the red flashing battery light on again by itself. Temperature had dropped slightly to 27°C. The flashing battery light went off after a few seconds and remained off. I rebooted and didn't get any amber or red lights at all - just the normal boot up sequence with the green side and dipped beam lights.

So... is this just lack of use combined with not doing a discharge to the red light for a long time? Or perhaps something else?

Additional info: In March 2015 I had quite a bit of work done by Emissions Free Solutions including new front and rear temperature sensors with wiring and a replacement charger due to a thermal incident with one of the original temperature sensors.

My VX-1 is a late 2007 build, still on the original Ni-MH battery pack and registered new in September 2008. A sticker on the outer battery casing states it was part of the initial battery recall and was manually conditioned in March 2008. Mileage currently stands at 16,194 miles.

If sensors record an internal difference of many degrees they flash alarm. Very old battery, do not overcharge it. Too many volts and ampers result into heat dissipation.

Thanks for the info and advice.

My little trip out tonight was a definite improvement. Booted up normally, started at 135V (how the battery pack managed to gain the extra voltage in 24 hours of rest I don't know) and the temperature was reading correctly at 16°C constant - no red lights at all! The yellow wrench symbol did illuminate after a few hundred yards, along with a 'Canbus' message, but both went out within a minute and did not return.

The rest of the ride was uneventful. I varied my speeds and briefly went up to 50mph for a short stretch but didn't use any regen braking. Another 5.7 miles on the trip, bringing my pre-MOT riding sessions to just under 12 miles. The battery pack is now at 128V at 26°C so perhaps another few miles tomorrow should be enough to bring the low battery voltage light on which will sync up the fuel gauge after a full recharge.

I think I should take the opportunity to 'blow the cobwebs away' on my VX-1 more often. I have enjoyed the last couple of rides as it brought back happy memories of 6 or 7 years ago when I used to ride almost daily on the commute to work and back.

Do you know where to source those modules ?

Last time I checked, vectrix parts only had the 24kwh modules...

I have thought about Leaf module upgrade before. I did own a Nissan Leaf back in 2014 on an 18-month My Electric Avenue project and it was a very nice car to drive.

From my understanding because I have an older Ni-MH battery with the old style charger, I would need to buy not only the Leaf modules, but a new charger, a BMS and all the necessary cables, connectors, etc. For Vectrix owners such as myself who know very little about electronics and the inner workings to upgrade EVs, it would be nice to see places like vectrixparts.com to have some sort of upgrade kit options that could be purchased with all the right parts needed in one package.

I have seen some posts on here before and I'm surprised just how well the Leaf modules fit in place of the original GP battery pack - almost like it was made to measure.

You can omit the BMS. Just make sure the cells are perfectly balanced and matched when installed. When Kocho converted the bike I ride now he added balance leads so the cells can be tested and balanced manually if needed.

Were do you live? Check if you have a Vectrix dealer nearby. I owe a repair shop dedicated exclusively to vectrix in Barcelona. If you send us your Vectrix we can convert it for you, with bms, tc charger, correct canbus wiring, latest firmwares, warranty...

THIS IS THE 82 AMP HR. CELLS THAT I HAVE INSTALLED IN MY SON'S RED VECTRIX. 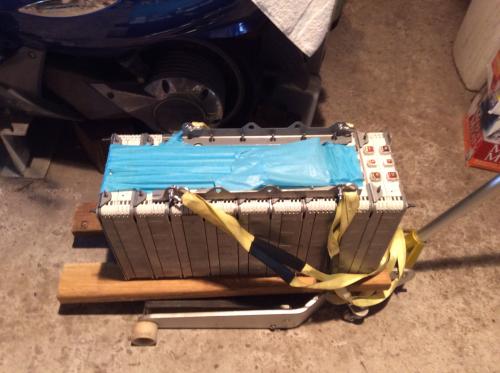 yeah, Bluestreak, this is the way! 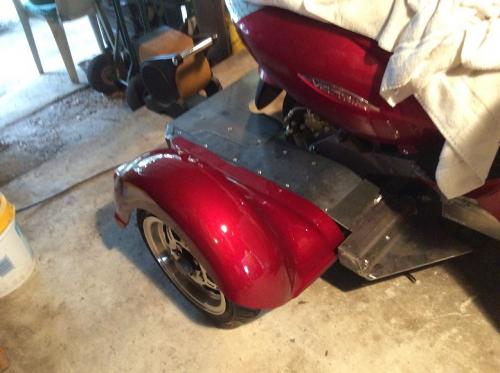