When any cell hits the shunting voltage the charger switches to the 0.5 amp balance mode, but Erik never explained what the end-of-charge criteria is.

I'm trying to nip a failure of a cell in the bud myself. When charging this evening, Cell #1 (the one I measured an uncomfortable 3.78 volts once before) hit a whopping 4.00 volts at the end of balance mode this evening. So, it looks like I going to have to re-start the campaign to convince Erik K. that there is a problem with my BMS.

Paul -
Indeed, if you have a cell going over 3.8 volts then something is wrong with the BMS or the charger. See email for details about testing charge current and swapping out BMS module. We'll send you a new one.

The Current BMS hardware module, like the Goodrum-Fechter BMS, declares end of balancing mode when all cells are above the threshold, somewhere between 3.6 and 3.8 volts. The Current bikes have several additional systems that can also declare end of charge, for error-proofing, failsafe, and to limit the amount of time the system holds most of the cells at those relatively high voltages. We terminate balance mode based on total pack voltage, temperature, or if we have been balancing for over 6 hours.

The upside of this is safety and improved cell life. The downside is that if the pack is way out of balance it might take several charge cycles to bring it back into balance. But once in balance it should stay that way, each charge and balance cycle should be sufficient to make up one or several rides worth of imbalance.

Actually, the latest and probably final version of the Goodrum/Fetcher BMS uses a charge current threshold (adjustable by the user) to declare end of charging. This way if follows the CC-CV protocol as has been recommended for lead acid and by most lithium cell manufacturers. Holding all the cells at a 3.7 volts or so while the charge current tapers to some low value will maximize the cells capacity, but as you wrote, may not be the best for long cell life.

I'll be building a Fecher/Goodrums BMS for my Thundersky equipped e-max in the couple months.

Here's a pic of the fried cell, and the slot in which it sat: 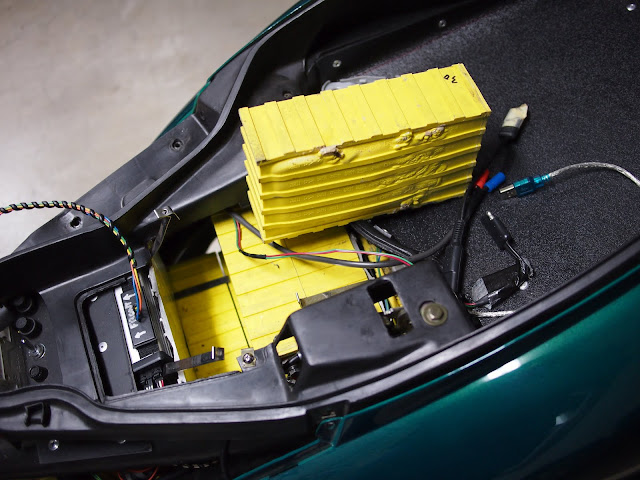 I'm still having the problem with charging, I'm getting a balance charge when I need a bulk charge. I've learned which wire connects the BMS to the charger to send that signal, and when I unplug that wire the charger jumps up to bulk charge mode. The guys are going to send me a new BMS.

I see you have Thundersky, not GBS, cells in your bike. You DO have an early version. I have few years experience with Thunderskys and I've never seen a cell go that bad. When I had cells degrade, my low voltage cutoff would alert me to the problem long before the cell would have gotten that bad. And my LVC is set at 2.1 volts, not the recommended 2.5 volts.

Why do you lay down the battery cell ? I don't think it is a good idea to put battery that way.

According to Current Motors (the scooter manufacturer) and presumably the cell manufacturer, mounting the cell narrow-side up is acceptable. Neither the Thundersky nor the GBS cells are designed so the active materials are, or need to be, "flooded" with electrolyte. My experience with Thunderskys is that the cell is no more than half-filled with free liquid electrolyte from the factory, and this all gets wicked up and absorbed by the active material after the first 1 or 2 charge cycles. The wicking and absorption will work equally well for either a terminal-up or narrow-side up position. The relief valve will work for either of these positions too, because the cell should never have enough free electrolyte to cover the valve. The only non-recommended positions are the flat and the terminal-down position.

I had a scooter with Thunder Sky cells the same as that, but when they died they puffed up a but but NEVER went that bad!! Every day I'm loving CHL cells more and more.

1) As PJD points out the current Current bikes use GBS cells. Test pilots (program now closed) get their bikes upgraded to production level as part of participation in the program. So Mike will be getting a GBS pack at some point in the future.

2) As Paul also mentioned the TS cells are spec'd to be able to be used on the narrow edge (just not flat on the long edge).

3) At first look this is an uncharacteristic style of cell failure and we'll be inspecting the BMS and the battery in detail (Mike, I'm thinking that given quite how bad this is we will send you packing so that you can return that cell to us along with the BMS for closer inspection).

We've certainly had several TS cells swell vs. just one or two GBS cells swell (i.e. GBS are performing much better than TS - and those GBS cells were "abused" in a test bike). Which is why we've switched.

A note on changing cell suppliers: Unfortunately there are no standard dimensions for large format prismatic cells. You can't get a "AA" or a "U1" and know that it will fit in your application. The nature of the chemistry certainly means that all the currently available 60Ah cells are "about the same volume" but when you're trying to package them into the bike then 5 mm wider and 5 mm shorter can really be a PITA! I look forward to the day I can buy cells in standard sizes - but alas, the manufacturers don't really have an incentive to support that initiative. Yet... (Yes, the manufacturers say they will produce to the size specifications you want - but then that locks you into a supplier because you have to commit to either more expensive cells or a larger minimum order quantity).

On the flip side - when it comes to changing chemistry we will be moving to higher energy densities. So, the volumes will be smaller for the same Amp Hours making packaging easier.

My new BMS arrived yesterday, and I finished installing it this morning. The charger is doing a bulk charge, so that seems to have fixed my last known problem. I also got a new mounting bracket for the BMS, shifts the position slightly back so there's more room behind the headlights for a bulb change.

Once I get a full charge, I'll give it a test, but it looks like I'm gonna be rolling again. And I should be able to ride through most of the winter, given that we very rarely see snow. Looks like I'll send my bike back to Michigan sometime next year for a GBS battery pack upgrade, but will continue to use the current setup in the mean time.

Been a while since I've updated this thread.

I'm over 4,600 miles now, which means I've put on about 3,000 miles in the year since the bike was re-delivered to me. And that includes several weeks of no usage, due to various issues described above.

My latest problem was that my speedometer and odometer stopped working. Terry says I was lucky, since the problem was in the drive gear on the front wheel, rather than in the instrument cluster. I removed the front axle and dropped the wheel out, replaced the speedometer drive, and put the front wheel back on. Was about 5 min work, but I was rather nervous about it before I stared. After all, I don't want a wheel to come off or something if I messed up.