Anyone in the Western USA have a battery pack they would like to sell?

Is it that you have a bad pack or a bad cell? In July or so my warranty will be up and if Vectrix manages to delay and delay (at which they are expert) I will not be getting a battery fix via warranty and might be interested in popping replacement cells in my pack, but I don't think I need a whole new pack ('cause I am so expert and diagnosing these issues).

If you find some used or new cells and wanna split the cost and shipping I am near and we could try fixing the packs together...

Sorry - I should have been more specific.

I have a VX-1 (NiMH) with some bad cells - I thought if I could find someone that had a VX-1 that they'd be willing to sell the battery pack from - I'd buy it to salvage some good cells to replace the bad ones in my pack.

Randy - I see you had the same thought - good idea to share the cost - and maybe we could both fix our bikes.

Anyone with a VX-1 NiMH pack for sale?

I've got a pack for sale...but it comes with the rest of the bike too :) 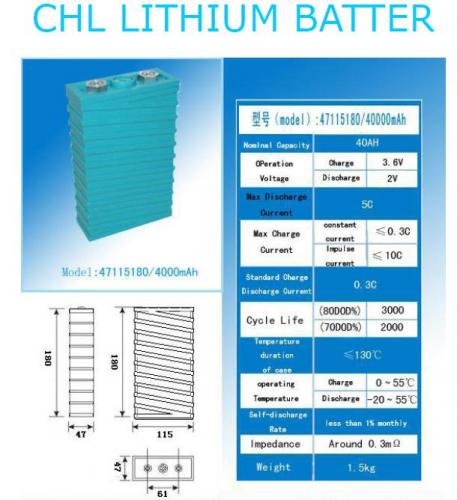 Not suitable means: It will work with the V, but instead of 2000 cycles these cells would only last 200 cycles. We need better cells.

Another problem: How to order? Direct via the manufactuer? Tricky and riscy if there is an waranty problem with the cells...

We are 60000 square meter size manufacturer instead of broker or trading company,we take 100% responsibility on warranty.

There is no 5C constant discharging dymo machine in china,but we test all kinds of batteries TS,GBS,CLAP...on golf car,when full accelerating,their voltage drop very quick even lower to 2.7-2.8V,but our CHL keep 3.1-3.2V even at 5C discharge current !

What we mean 2000cycle is based on 1C charged and discharged,this is standard.

And 5C constant discharged is needless on real world.

But some bad quality lithium battery don't even bear such low period big curren,because of their bad impedance.

120A with 3C constant discharged would be definitely not problem for CHL battery,but 40AH is still too small to be install on Vectrix or 160km/h maxi scooter,we have 50AH too,and 100AH will come out very soon !

max acceleration current draw is 230A.

40Ah cells can do that, with some loss of service life.
cells with lower internal resistance do better.
SE 70Ah cells are the best fit I have found so far, mainly because of their physical dimensions.

at that speed you don't have much range, I normally go for bigger batteries more for the range than the extra service life.

A Vectrix has to be heavily modified to get to that speed, both to avoid the motor rpm getting too high, and a more powerful controller.

Our 100AH battery will come out 2 months later.

Terrific,
That means the list of available compatible (with the kit I'm developing) LiFePO4 cells for a Vectrix is:
TS 40Ah
SE 40Ah
CHL 50Ah

CHL:
out of curiosity,
was the CHL 50Ah cell designed for a specific application?

Since TS is the poineer of square Lithium battery,so that most of battery boxes of EV are design accordingly,so that following lithium manufacturer have to choose similar size to get the testing opportunity !

I know I will go out of warranty this June/July so if I haven't heard from Vectrix on getting the bike fixed before, I will be looking to shunt or replace my problem, not that I have even opened it yet for fear of making things worse.

Since I started this thread I've been watching antiscab's progress on the Li-ion conversion kit - it seems logical to invest a bit more into a bike that will be more practical and last longer. I've pretty much decided to go for it - I just have to order the kit and the batteries....

E&J Technology Group specize in designing and manufacturing high quality power solutions for any electric vehicles.Welcome you surf our website to learn more about our batteries.Now we had many customers began to use our LiFePO4 battieres with plastic case to replace the old lead-acid batteries on the electric vehicles.You can check the our office website to learn our LiFePO4 battery packs with cases for electric scooters @ http://www.ejbattery.com/allProducts2.asp?id=18

I tried several times to go to your website, but was unable to do so. Perhaps your server is down?

A communication error occurred: "Operation timed out"
The Web Server may be down, too busy, or experiencing other problems preventing it from responding to requests. You may wish to try again at a later time.