See http://www.thunder-sky.com/home_en.asp?id=744&typeid=79&orderby=136, Marco Polo,could you please translate the following into English ? it is really fun !

Chairman Mao relive and went to save American,this is the content of above story 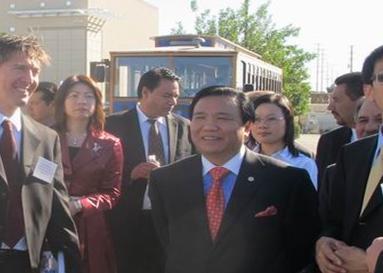 FWIW - the translate function in Google Chrome gave me the following:

MVP RV Inc. Originally the largest in California, a well-known limousine manufacturing plant, two years ago, the financial crisis sweeping the world, the U.S. auto companies are particularly affected. MVP RV Inc slowdown in the production of luxury cars sales, factory, CEO Williams (Brad Williams) could not find funds to maintain the normal operation of the factory, the factory has been difficult to sustain the business, he eventually had to plant 80 % of employees dismissed. On the verge of collapse in the factory on the occasion, Chairman of Zhong Xin Jia Chinese entrepreneurs invested 310 million U.S. dollars acquisition of MVP RV Inc., He just put a troubled company from the brink of bankruptcy back, so MVP RV Inc. Back to life. This not only saved the company, also was fired 2 years, day workers anxious for life to return to the long-lost jobs. So there have been tears of U.S. workers lookin welcome Chinese entrepreneurs moving scenes.

Zhong Xin Jia Chairman MVP RV Inc. Reorientation of development, the use of MVP RV Inc. Housing depot vehicle manufacturing of advanced technology, the use of rare earth Winston, the world's most advanced lithium battery, creating the world's most advanced electric luxury cars to the U.S. market, while Asia as a pure electric luxury cars to the future development of the market. The newly formed MVP RV Inc. Announced that from 2011 to 2013 employed 3,100 workers will increase its car production will increase by about 30,000 units this year, 3,000 vehicles.

Crest Enterprise (Krystal Enterprises) is located in California Beirui A, is the United States specializing in the production of luxury cars, a international enterprise. The company always stick with superb craftsmanship to create high-quality cars, but also tailored according to the requirements of customers all types of luxury cars, luxury buses and other vehicles, is the largest stretch limousine, limousine , luxury bus, Pakistan and various exclusive luxury luxury car manufacturers. From the construction of the nearly 30 years now, and because of its superb craftsmanship, the perfect professional design and reputation. Currently has 800 employees, annual output of more than 1500 types of luxury cars, the output value of 1.7 billion U.S. dollars.

But is such a well-known enterprises in the global financial turmoil, the production and management trouble. EVS25 exhibitions held in Shenzhen before Crist enterprises in accordance with the requirements of Chairman Chung Jia Xin, with Winston Group specializes in the manufacture of rare earth lithium batteries a Lincoln luxury brand extended sedan. This is the only luxury longer a pure electric car, named "Crist - Winston No.1". Lincoln brand luxury sedans Zheliang extended session in EVS25 show and shine the parade of new energy vehicles, pure electric car enthusiasts are in hot pursuit. During the exhibition, the CEO Edward Ge Leiqi Crist brought his team had come to Shenzhen to attend EVS25 show, and Winston Edward Gelei Qi Zhong Xin Jia, Chairman of the Winston Group agreed to acquire business related matters Crist .

January 25 morning, Winston Global Energy Co., Ltd. Zhong Xin Jia Chairman of the Board announced to the media, signed a purchase Balqon Corporation produced 300 sets of orders for electric vehicle drive system. Winston and the U.S. business transactions between the amount of new energy products, so Balqon Corporation R & D production of the heavy-duty zero-emission electric vehicle drive system in an expansion of 7.5 times, for Chinese enterprises to invest and set up in the United States set a good example.

The company is also affected by the global financial turmoil, production and management difficult, face closure. Zhong Xin Jia took a fancy to the company chairman in the production of the strength of electric vehicle drive system, determined to make this business into the Winston Group, specializes in the production of pure electric vehicle drive systems. In 2010, Chairman Jia Xin Zhong Cash $ 5,000,000 initial investment Balqon Corporation bought the company, becoming the largest shareholder in the company Balqon Corporation.

Zhong Xin Jia Balqon Corporation completed the acquisition of the President, after the company announced that it will in the next 18 months to purchase the company's 300 sets of electric vehicle drive system. These products will be exported to China for the production of 15-40 various models of passenger cars. The bus power source that is Winston Ltd global energy lithium batteries. Balqon Corporation's CEO Samra (B. Samra) said excitedly, Zhong Jia Xin huge orders not only saved the company, will completely change the size of the company's development Balqon Corporation. Zhong Xin Jia President announced that the next few years, with the development of new energy automotive industry, Balqon Corporation's annual production capacity will reach 50 million sets of electric vehicle drive system level.

Zhong Xin Jia is chaired by the invention of lithium rare-earth people. He believed that his new production of energy products and Balqon Corporation's electric vehicle drive system combines the best will be able to produce electric vehicles. For Los Angeles, the mass production of this green energy cars will create more jobs. In addition, Zhong Xin Jia also plans to build a production of rare earth in California lithium battery factory.
Whether the acquisition of MVP RV Inc., Krystal Enterprises, or the acquisition of Balqon Corporation, Winston Global Energy Group has been proved to the world, the Chinese invented the world's most advanced lithium battery life of rare earth not only for the U.S. auto industry has brought new vitality, but also will promote the rapid development of new energy vehicles worldwide.

Chinese entrepreneurs acquire U.S. auto manufacturers, like magic, like fairy tales, cause shock the world, global concern. MVP RV Inc. Williams, the former CEO, said the sales slowdown as companies on the occasion, he had the honor to know Mr. Zhong Xinjia this specialized production of batteries for electric vehicles entrepreneurs. They knew them, the process of encounter, almost fairy tale is also strange. And this is for the Zhong Xin Jia, let him not become happy MVP RV Inc., Krystal Enterprises, Balqon Corporation three American car manufacturer's largest shareholder, so he really was pleased that, when he saw each production of a new energy vehicles to reduce the number of fuel vehicle emissions pollution of the atmosphere, the Earth would increase more than a trace of green, the salvation of human beings even more hope.

Williams and Edward, and Samra and other American entrepreneurs have been many Chinese entrepreneurs for help, but eventually won the Zhong Xin Jia investment, which seems to depends on chance. However, in accordance with our mission to develop new energy products to the invention and manufacture of lithium battery life of rare earth, to earth is also our goal of a green bell Xin Jia, this is all the Buddha's enlightenment, guidance, which is scheduled Buddha the reality of myth. For a home determined to save human existence, but also the earth is a green entrepreneur, as soon as possible eliminate fuel vehicles, to reduce and eliminate fuel cars on the global environment of human beings and atmospheric pollution, is his pursuit of the highest state Bodhi is his, is his greatest fulfillment.

University of California, Riverside officially founded in 1954, is a public university, the existing staff of 549 people, nearly 2 million students, is the California Institute of Technology campus in the 10 most beautiful campus in a school, but also the nation's largest language training center. University of California Riverside has 10 undergraduate majors, 50 master's degree programs and 39 doctoral programs. Because of the service, teaching, scientific research has made remarkable achievements in the world, University of California Riverside's teaching and research staff of scientific progress by the famous American Association for the amount accepted as a member of the United States ranked first on several occasions.

The school has 1,200 acres of school wide, the various hardware and software equipment, the students In addition to formal classes, the school can make full use of audio-visual classrooms, libraries, and swimming pool, gym, tennis courts, volleyball courts, baseball fields, etc. recreational sports facilities.
President Tim White, University of California, with Chairman Jia Xin Zhong said after the signing of a memorandum of understanding, this is the school the biggest individual donation ever. Riverside Campus Engineering Department Reza Abbaschian says this engineering student is a great opportunity for new energy technology is also the greatest encouragement.

The U.S. business trip, Zhong Xin Jia also at 2.3 billion cash acquisition of California, a yacht club and a golf course, indicating that Winston Group's business tentacles have started in a new field extension, which is Zhong Xin Jia Chairman expansion of its new energy products, energy products with a new step to promote the cause of global environmental protection is another major step forward.

If the lithium battery using the earth as a power of pure electric vehicles can reduce fuel cars and then wipe out, eliminate vehicle emissions pollution of the Earth's atmosphere, then, Winston storage battery charging station will be developed by the global emission reduction provide important support. Zhong Xin Jia President sights storage area charging stations in more extensive future development prospects, resolutely decided to start from the United States, investment top the entertainment industry and its long-term investment objective is to use stored energy to the charging stations in all areas to achieve global energy emission reduction target is also a green planet.

A short four-day U.S. trip, the generous Chushoubufan operation highlights the lofty aspirations of the Zhong Xin Jia Winston President and his group is stalked to the world.