Schwinn cuts out after a few seconds?

I just bought a brand new sealed in the box scooter that sat in a guys garage for a few years schwinn s500 scooter but found the batteries were stone cold dead and will not take a charge. So I used my old batteries from my old 500s scooter.

As soon as I get the scooter rolling down the road it just cuts out and as soon as I turn it of and on again it takes off fast and than dies again.

The charger says the batteries are charged? The reason I got this scooter is my last one was doing the same thing.

I also had a razor 300 scooter that did the same thing. I changed out the controller,fuse,brake switch and even the motor. Finally I tossed the thing in the trash. Now I am on my second Schwinn with the same problem.

Any Ideas? I am going to buy new batteries tomorrow.

Sounds like a low-voltage cutoff is being triggered by sagging voltage under load.

If that is the case, better batteries should fix the problem.

However, under-sized cables can also cause voltage drop due to losses in the cables (P=I^2*R).

New batteries solved the problem. Thanks for the help!

I've been reading your threads and need to ask you a few questions about my Stealth I just bought.
I purchased this 3 year old Schwinn/Currie 1000 Stealth from a college kid off of Craigslist.
He said his dog ate the charger so he couldn't let me ride it fully charged, but it might take me
a few houses down before it shuts down. I ordered a new 36vdc charger on eBay and checked out the
scooter a little bit while I was waiting for it to arrive.

1. The scooter would come on with the switch and show a green light on the throttle.

2. It will accelerate for about 3 or 4 seconds and the lights with go from green almost
straight to red, then the scooter will shut down completely.

3. If I shut it off at the switch for a couple seconds, then turn it back on, it will
show a green light and do the same thing. Seems like the acceleration is reduced
each time I do that to about one or two seconds before shutting off completely.

4. Charger arrived in the mail and I plugged it into the scooter. Showed a red charging
indicator as it should have. But after just a few minutes I went out into the garage
to check the indicator and it had turned to green like it was fully charged.

5. I tried to ride the scooter again just in case the batteries "remembered" or something.
Same thing, moved for a few seconds then shut down.

6. I plugged the charger in and left it over night even though it was showing a green light
hoping that the scooter fairies would make the batteries come back to life or something.

7. No luck the next morning. Scooter does the same thing as before.

8. I grabbed my multi-meter and checked the output of the whole pack and got a surprizing
36v at the connector. I know that doesn't mean the pack can take a load from the
motor. I have not checked the batteries individually yet. I understand you can check
them individually at the solder joints if the switch is off or the pack is disconnected
from the scooter. I don't know how this would be possible with the batteries soldered
together in series. I'll try it though as I don't want to de-solder or cut the wires
to check the batteries. I know you should replace the batteries in a set of 3 to get
better longevity, and I will if I can make sure that's what is needed. It sounds like
a few people have been through this. Sounds like a battery or batteries are worn out.
I'm sure the kid never replaced them in the 2 or 3 years he owned it. From the looks
of the rear tire, he rode it a bunch too.

Any input or suggestions on what I should check before ordering new batteries would be great.

I think I may take the pack or batteries down to interstate battery and have them load tested too.

Thanks in advance, Pete

You most likely need a SET of NEW batteries! If the batteries are not closely MATCHED for series conneted use, as soon as you attempt to use them, the voltages will change, causing the shuttoff. A set of 3 twelve volt batteries in series should measure between 40 and 45 volts immediately at completion of charging.(Not 36 volts)-- If your batteries only test at 36-38 volts after charging, it is very likely they are BAD! If FOUR 12 volt batteries are used, the full charged voltage is normally 52 to 60 volts! (Not 48 volts) A single 12 volt battery, freshly off the charger, will typically be in the 13 to 14 volt range. (If it is only 12.4 volts or less, it is bad, or not fully charged!)--These voltages apply to lead-acid or lithium Iron batteries.

Sounds like you SHOULD have purchased a complete SET of new batteries! It is very likely that unmatched batteries were the cause of all your scooter problems, and one or more of the batteries voltage dropped too low, after the scooter tried to operate, causing it to shut down,-See my other post, referencing ACTUAL battery voltages to be expected. (In operation, if you measure a 12 volt battery WHILE RIDING the scooter, fully charged and GOOD 12 volt batteries should EACH test at OVER 12 volts, while the scooter is running!)

Just got the scooter and the new charger. I'm certain the batteries are bad now,
especially as you pointed out, they are way below normal operating voltage. And
when the charger tries to charge them, they will only take a charge for a couple minutes
and the charger will show fully charged.

I'm ordering new batteries tomorrow and will post the results when I install them.
In the meantime I'll clean all the connections, check the fuse holder, etc.

I'm pretty excited about riding this thing to work. I just sold a couple E-500's
I got a smoking deal on. One worked pretty well but I think was about to need
batteries as well. I've never rode one with fresh batteries.

What kind of range should I get with fresh batteries at 185lbs? I only have to ride
4 miles to work, then I can charge it while I'm there and ride it home.

Thanks for your help, Pete

Range decreases with increased speed, or hills, or stop-and-go operation, and increased weight load. I would estimate that a GOOD, matched set of batteries, rated at 15 Ampere-hours or better, will give at least 15 miles, and smaller/lower rated batteries will give shorter range-this estimate is based on your weight, average terrain, and 20mph speed. Strong headwinds or big hills will shorten this range. If you can assist by pedaling, you could greatly extend the range!

Thanks Bob, can't pedal my Stealth as it doesn't have any pedals.
Can't fit 15amp batteries under the deck. I may try to fit some
12ah batteries.

Any input or suggestions on what I should check before ordering new batteries would be great.

I think I may take the pack or batteries down to interstate battery and have them load tested too...

Don't even bother with a load test. Drop those three doorstops at your closest battery recycler and buy three new ones.

You MIGHT get 4 miles on a charge. I'd test that on a non-work day when I had a chase vehicle standing by. Could be doable, but you will likely have to go boringly slow! And it may take you 45 minutes to get to work. Recharging at work would be essential!

Is this mostly for commuting? Are you planning on riding on the street, bike lanes, etc?

Got my new batteries from Chrome Batteries today. desoldered and resoldered the new batteries.
Took it for a really short ride to make sure the scooter functioned correctly.
Runs great, I'm happy with the purchase. Hooked up the new charger and I'm letting it charge
overnight. Can't ride it to work to check the range tomorrow as it's going to rain all day.
Maybe take it for a long cruise with a chase vehicle this weekend.
Also purchased a Desulfator to keep wired on the scooter permanently. I also
got a new 12V charger with a built in desulfator and battery recovery system.
I hoping to bring the old batteries back to life for use in another scooter.

Since you have a 12V charger/desulphator, have you considered rewiring the scooter to charge in parallel and run in series? Great way to keep your pack balanced with every re-charge.

I have the BatterMinder 12248 charger and desulphator. The instructions suggest best desulph results if the OCV (Open Circuit Voltage) is 12.4V or higher. Fully charge each battery separately, allow to rest for 12 hours, and measure the voltage, to get OCV.

I've run mine for over 800 hours continuously and achieved about a 20% increase in available Ah's. That on a B&B 12V 20Ah Deep Cycle. Don't expect "like new" performance, and if the crystals are too hard and have been there too long, you probably can't salvage the battery.

To get longest life from your SLA's, I think it's better to consider desulphating as more of a routine maintenance procedure, than a Lazarus Device.

If you have a wiring diagram for yours, I will rewire it to charge in parallel and run in series.
I have a bunch of wiring to do on my CNC router anyway, I may as well do both at the same time.

Thanks for the input, I'm excited to start using my scooter and hope I can extend my battery
life with the knowledge I've received here.

I don't have a wiring diagram, but maybe these pics will help. There's lots of good info on V regarding parallel charging (that's how I learned it about 3 years ago).

For your application, 12AWG wire is fine. I used Anderson Power Poles to make a new harness, a series-jumper plug, and a parallel charge plug that adapts to a single 12V automotive smart-charger. There are other opions for plugs, of course, but the Andersons have worked very well for me. A bit pricey on the intial re-wire, but after that, they are virtually fool-proof. I run and re-charge every day when road and weather conditions allow it. Sometimes twice a day. Never had a bit of problem with this setup.

Take a look at the pics and you can see how I did it. Let me know if you have any questions.

Top plug has a + and - lead to each of the three batteries. Lower plug in photo has jumpers that interconnect each 12V battery into a series 36V pack. One + , and one - lead go to the fuse/switch. 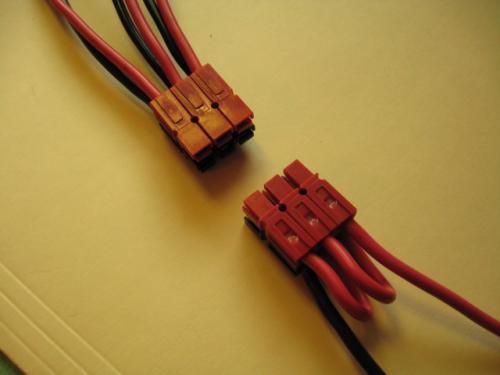 To recharge, remove the series-jumper and plug in the parallel charge plug. All +'s are connected to one "standoff". All -'s are connected to the other post (actually just some brass bolts fastened into a scrap of nylon kitchen cutting board). Any 12V charger can clamp onto the posts. 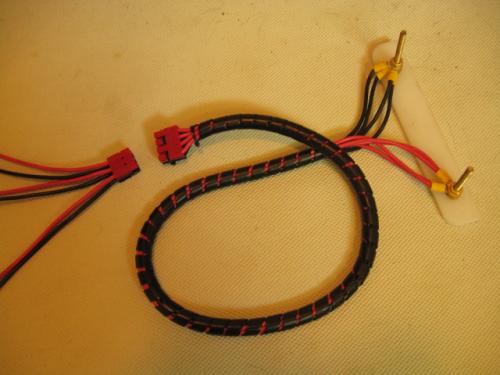 Three 12V 10Ah SLA's in parallel will act like a single 12V 30Ah battery. With the parallel charger plug connected, you could clamp jumper cables to another small 12V and either "accept" a recharge (in an emergency - NOT recommended), or you could jump-start a small car if your pack has the energy.