Hi,
I have an XB-600 Electric Bike that worked fine until recently. Yesterday, when I was driving it home, the scooter would not speed up at all. The throttle was kinda stuck and would not go all the way to the top. It still controlled the speed fine. I turned it with just a bit more force, and it got unstuck. However, now the throttle is completely unresponsive and I can't get it do anything. When I put the key in the ignition, the rear wheel just turns at a constant speed, with absolutely no control. I know this might be hard to understand with my wording, so I took a video and uploaded it to help make solving this problem easier.

I'll try to embed it later, but this works for now. Also, the scooter has had no mods, or changes and is pretty much stock.

Edit:
I forgot to say that the whole throttle handle (speed handle I guess?) is lose and comes completely off. I think is more of a glue wearing off issue, but it might have contributed.

thanks for the reply,
so, i disconnected the throttle from the rest of the wiring, and the motor stopped turning. So, its narrowed down to being a throttle issue. However, then I kept trying to open up the throttle, I could locate the two slots but I could not get a tab to release. I managed to get a plastic piece that was glued on to come off, exposing a green, red, and black wire. After some tinkering, (mostly attempts to get it open), I just decided to try to put it back on. To my surprise, the throttle actually worked. The motor would not spin until the throttle was turned, and the speed up functions seemed to work.

I had a similar problem: bad contact inside the throttle. I tried to solve but without succes. Therefore, I boucht this on ebay. For that amount of money...

As I said in my first post, it's easy to just replace, but by fixing it yourself you don't have to wait on the post and you get to know more about the scoot.

As for releasing the parts: good on you for finding the slots! The three wires you found are the back side of the Hall effect sensor itself. The problem in my case (and, it appears, in yours) was that the magnet in the grip had somehow come loose in the shock of the fall.

I'm REALLY sorry I didn't take any pix when I had mine open. Basically, the movable grip part is assembled by fitting it onto the base with two lugs fitting into two slots in the base and engaging a hairspring. The grip is at the -20% throttle position: below zero. The grip is then rotated past a snap and the job is done.

As you have discovered, releasing that snap is the hard part. All I can suggest is a) several thin-blade straight screwdrivers, b) lots of light, and c) force: since the plastic is, well, plastic, you can see where the part moves when you put force on it and use the light and the screw drivers to help it along.

I wouldn't worry too much about breaking it; even if you do, you won't be any worse off than you are now, and even broken, you can probably get it re-assembled and working.

Another thought: How about taping a high-intensity magnet on the OUTSIDE of the throttle; wouldn't that activate the Hall Sensor? You'd have to experiment.

Keep us informed, and this time take pictures!

Ok, I took some pictures. I still can't seem to get it open. I've circled the two slots in red, or at least what I think the slots are, so you can confirm if its the right one. In brown, I circled the metal ring on the inside, which i have been able to take out. I tried keeping two 2 strong magnets on the throttle, but the most that happened was the motor slowed down a little bit. Nothing major. If the pictures aren't clear, I can retake them.

here i was able to take the plastic piece off the top, exposing the green, red, and black wires.

also, @fivari,
when you bought the new throttle from ebay, how did you hook it up? In the picture shown, at the end of the wires is a some kind of a endpiece. Did you just slide them into the existing plastic female connector that was already on the old throttle?

I must admit, the throttle did not arrive yet. But that is exactly what I am plannig to do. Looking at the picture, I can see the metal parts that should fit into this connector. 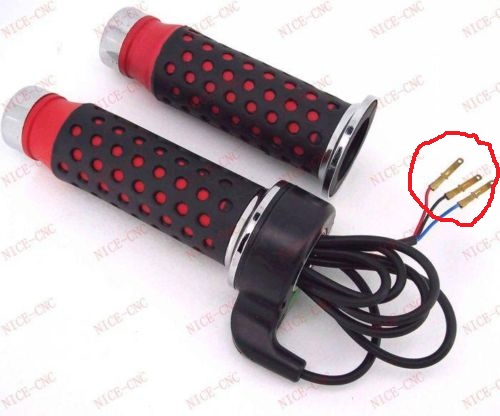 Yeah, I tried sliding a small niodymium magnet around the area of the Hall effect sensor, but I couldn't get it to start the wheel motor either. Sigh.

I'll take the throttle off the handlebar tonight to refresh my memory. If possible, I'll take some photos. The green, red and black wires are the backside of the Hall effect sensor. I assume that black = ground, green = supply, and red = signal V.

The metal ring (and its setscrew) are the anchor for the assembly. AFIK, they do not need to be removed from the throttle assembly.

The slots look about right. They are actually the mold access for the back of the positioning lugs; the snap tab on the stationary part will bear on one side of the "upper" snap tab - the one near the index marks on the grip part.

There will also be a circular hair spring for return tension in there somewhere - I forget exactly where.

You are getting closer; now remember the three keys to figuring out a plastic assembly: a thin straight blade screwdriver, lots of light, and force. Apply force in the light, look closely, and pry around the place you see distortion or evidence of resistance. Things will break sometimes, but a) they can usually be repaired once the assembly is apart and you understand the design, and b) even if you can't fix it at that point, it was broken already, so you will not have lost ground.

Here are some pix:

Getting it off the handlebar:

If the grip is rotated about 30%, the magnet can be seen in its carrier. It may be possible to re-seat the magnet through this slot without further dis-assembly.

Getting out the fixed sides:

The fixed side is moderately flexible, and the lugs can be pulled out so the can release the grip.

Catch lug, with slot for positioning lug in the near background.

Magnet in its carrier.

The throttle arrived today. Apperently, the original throttle had female connectors on the wires, whereas the new one has male connectors. I didn't have a close look when I ordered the new one. So, I had to recycle the original ones, did some soldering, figured out what wire to put on what side and now it is working again. Costed me 9USD and one week of patience. I also discovered that buying a similar throttle in Belgium would have cost me 35 EUR or 50 USD. God bless Ebay!!

hi again,
sorry for the delay, as i was extremely busy and could not work on the scooter.
Thanks a lot Mark (mf70) for the pictures, and your basic step by step method to taking it off. I am going to try that today, and will post back with pictures and results. I was able to get the hall effect sensor out the of the throttle, and i tested it using a magnet. It works fine, so the problem is definitely the inner magnet coming off of its seat or something.

Thanks again! I really appreciate it.

btw, fivari: what do you mean by male ends? so it came with a plastic connector, but it would not fit because it was male instead of female?

with the hall sensor in the throttle, generally it is black = 0V, red = +5V and green = varying hall signal

hi again,
btw, fivari: what do you mean by male ends? so it came with a plastic connector, but it would not fit because it was male instead of female?

No, without plastic connector: just the cupper ends as marked on the picture I included. Because I didn't have the female counterparts, I had to recycle the original female ends. However, this worked fine.