Aptera is back, with resurrection of the three wheel electric vehicle planned by Zaptera

Basically - All of Aptera's intellectual property was bought up by a new company, Zaptera. That company has made arrangements with the Jonway Group to handle manufacturing of the vehicle Aptera called the SR01. These vehicle bodies will then be shipped to the U.S. for final assembly and quality control. The drive train will be as Aptera designed it, air cooled batteries made by A123 Systems, and an electric motor from Remy.

They expect to begin selling vehicles in early 2013.

They're going straight to manufacturing with the vehicle Aptera designed.

Here are pictures I pulled off Jonway's website. These were taken at the Beijing Auto Show. 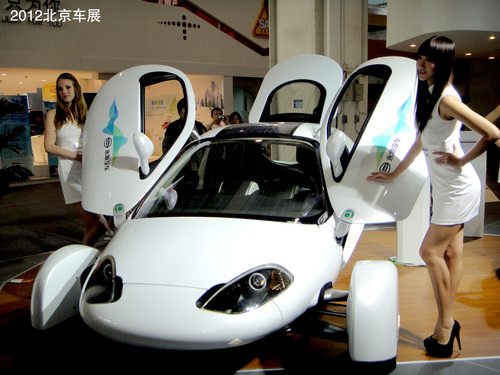 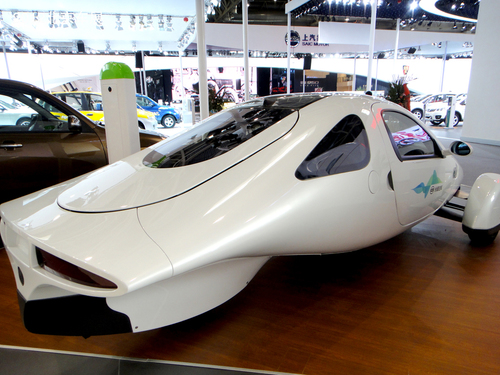 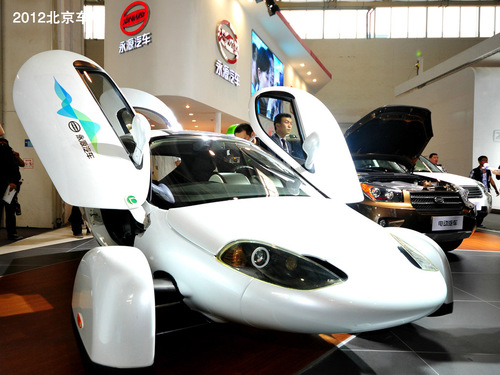 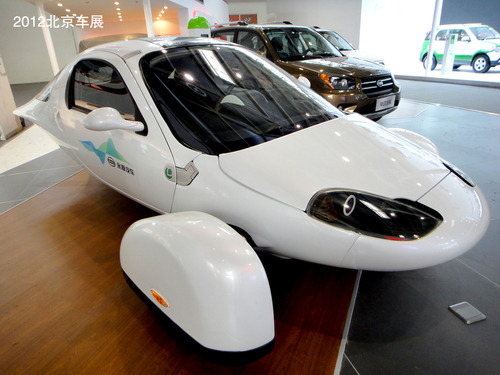 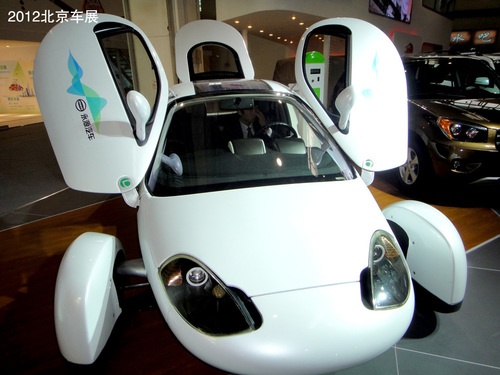 This is good news. I'd like to see as many players in the electric car space as possible.

Fascinating - and I agree with Dave W - ultimately good news. No sense in throwing away what seemed to be a very advanced program.

The one thing I wonder is that Aptera was discussing use of high grade composites. Will Zaptera do the same or will they make a less capable shell? It might be that it represents a good compromise to get the vehicle to market. Or it might not. Dave - as you follow up on this you might want to ask about that.

Any mention on price?

What is its CD? Looks like it could beat that of a Lear jet. It has 3 wheels, but will it be legally a car in the US?

So, from the article, I assume it will be legally motorcycle, thus getting around all the crashworthiness requirements. The trouble is, from what I have heard from some Xebra buyers, some, perhaps many, US states will not recognize it as a motorcycle, so it will be unregisterable.

Yes, I've been on the Xebra mailing list on Yahoo!Groups since 2006, and there was various trouble getting some states to recognize the Xebra as a registerable vehicle. I think most of that will have been worked out, unsure about that though.

I got to speak with Chris Anthony the other day (CEO of Flux Power, co-founder of Aptera, some kind of involvement with Epic) and that was interesting. He said that the Aptera founders were pushed out when the Board hired people from Detroit who wanted to go after DOE money, and to do so they had to build a four-wheeler, and they started down the road of building a CamryClone but ran out of money.

Deringer told me he had "all the IP" so the key question is whether the Chinese manufacturers can replicate the composites manufacturing process in the same way Aptera did. Seems to me what Zaptera should do is to instead approach Epic and talk about replicating the Aptera using people who now work for Epic but had formerly worked on the Aptera.

Yipes, anything with ZAP as part of the name is scary. As a ZAP PK owner, I reserve the right to slam the crap that I bought and the company that so willingly misrepresented its products, screwed its dealers and delivered a product that is worse than anything Detroit built on its worst Friday in the "ship it" volume oriented days of the sixties, seventies, and eighties. As a former UAW member, I get to say this, as well.

It will be interesting to see if the Zaptera project goes anywhere.

From my perspective I can certainly believe what was said about the founders being forced out and the Detroit guys going after DOT money. However, I bet that's only one side of the story. Perhaps they thought the only way to survive at all was to get the DOT money - so they felt they HAD to do a four-wheeler. For example I seem to recall Aptera making grand claims about meeting or exceeding automotive crash testing. To live up to that statement probably adds many millions of dollars to the budget. Don't get me wrong - I'm not talking about making the vehicle safe - I'm talking about the *testing* aspect of it. I just present it as an example of how Aptera might have bitten off more than they could chew. Also, let's not forget that they didn't exactly take the X-Prize by storm either. So, you can't put all the blame on the suits...

What do you all reckon?

For example I seem to recall Aptera making grand claims about meeting or exceeding automotive crash testing. To live up to that statement probably adds many millions of dollars to the budget. Don't get me wrong - I'm not talking about making the vehicle safe - I'm talking about the *testing* aspect of it.

My favorite (dead) 3-wheel project was the Venture One/Persu. They clearly acknowledged the difference in cost between designing a crash-safe vehicle, and actually crashing dozens of them into concrete wall enough times to satisfy the NHTSA (or DOT, or whomever). Installing a roll cage and airbags is far easier than proving that they always work according to regulatory standards.