I was able to be at Brammo's launch party for the Empulse and Empulse R. They posted a press release (below) and have posted these articles:-

Over the weekend some Brammo engineers explained the transmission was necessary because the Empulse R has a lower voltage battery pack than the Empulse RR (race bike). That is, the race bike hits 150+ miles/hr on the track, and it sounds as powerful as the Lightning Motorcycles bikes, with no transmission. The voltage is over 300 volts, however, and the production bike has a smaller motor and lower voltage battery pack. 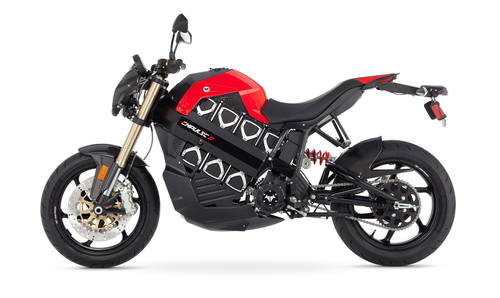 This is one of their pictures provided in the press pack.

The build quality is excellent. I was amused, however, to see one power cable marked as "welding cable" and have black insulation. Yes, I've built enough EV's to know that "welding cable" is an excellent choice for the connections between pack, controller and motor. However, I am under the impression that the policy for high power cables on vehicles is to use bright orange colored insulation, as a universal indicator of high voltage cables. Is it appropriate to use "welding cable" ??

The people in the club were excited from all I could tell, eagerly studying the bikes and taking lots of pictures.

The price may be a bit high. Brammo's price for the Enertia was also thought to be high.

Ashland, OR (May 8th, 2012) – Brammo, Inc., the designer and manufacturer of world leading electric motorcycles, today revealed pricing and production plans for the Empulse and Empulse R while giving motorcycle enthusiasts in Los Angeles a first look at the stunning new design.

At this unique electric vehicle industry event, Brammo has demonstrated to consumers and motorcycle insiders alike the advancements in electric motorcycling and is providing a glimpse of what is to come in the future. The Empulse is the only electric motorcycle to include a 100-mile range and 100-mph top speed as well as a breakthrough battery and powertrain system enabling a great zero-emission experience.

Research conducted by Brammo with both customers and dealers has driven the development of the Empulse and Empulse R. As a result, these motorcycles now come with a water-cooled AC motor and fully integrated IET ™ six speed transmission, seating for two, regenerative braking and on board J1772 Level 2 charging capability. To ensure the highest quality performance and design, Brammo works with internationally renowned manufacturers for superior components of their motorcycles. This close attention to the supply chain ensures the durability, reliability and ultimately future resale value of Brammo products.

"It was important to Brammo to create a great motorcycle and we paid attention to customer feedback to create just that," said Craig Bramsher CEO and president of Brammo. "From concept to production the Empulse product has evolved quite a bit. We are bringing you a different motorcycle that promises to be more than what our riders expected."

The two models vary as follows:

Brammo promised that of the first 1000 people who pre ordered an Empulse, one would be selected at random to receive their motorcycle free of charge. Last week from the first 1000 orders six finalists were selected. At the event, Craig Bramscher rolled a dice and Jueiming Chen was the lucky winner.

True to Brammo’s devotion to zero tailpipe-emission transportation, the Empulse launch event was carbon-neutral. Brammo has worked with Carbonfund.org to purchase carbon offsets to mitigate the greenhouse emissions generated by transportation, electricity use, and other resource-intensive activities associated with this event.

In additional efforts to reduce travel and carbon intensity of the event, Brammo will stream the launch event live to tens of thousands of motorcycle enthusiasts, who will be able to experience the launch party across the nation and afar in Asia and in Europe .