I've once again been looking around at electric transportation, and the XM-5000Li struck me as close to something I'd like, but just a bit lacking in some ways. Is it possible/feasible to mod the bike to do 70-75 with a 275 pound rider and about 60 pounds of cargo on California bridges/freeways (Golden Gate bridge, I-880, etc.)? I see in the demo video on the x-treme site that it only managed 64.7 MPH with a 150 pound rider.

Also, I see talk of how a BMS (battery management system) is good and yet not good in all cases. What are the upsides and downsides of having BMS on the batteries on an electric motorcycle?

Also, can the controller on the XM-5000Li be programmed? On my power wheelchair, a handheld programmer can be used to change the forward acceleration and about 10 other settings. I'd like it to accelerate faster than was shown in the demo video on x-treme's site, as 15 seconds to get up to 60 could be dangerous on some roads. Perhaps 10 seconds to get to 60 would be safer.

Also, do bikes of this level generally come with regenerative braking, or is that generally an aftermarket addon?

Also - What are some available/popular mods for this bike? I could see it and the rider benefiting from a much larger windscreen, and even at stock settings, it managed to more than peg its speedometer. I'd like a better speedo (digital?) on it.

Lastly, if this is just too much to ask out of this bike, what are some of my other options?

But it concerns me when I hear someone wanting to do 75 mph with 275lbs + 60lbs on the freeway with a 5000li. From a safety standpoint, that seems extreme. And you aren't really asking that the cycle funtion the way it was designed. I am 6'2", 225, and have ridden with a 115 lb passenger at 53mph before, and I felt that was pushing the limit of what I would want to do. I frequently ride around 30 to 35mph on back roads with absolutely no traffic, and she will do 40 miles at those speeds. The 5000li will go even further. They have identical frame and chasis. I put on a larger rear tire, which gives a much nicer ride and somewhat higher top speed, and I also need a larger windscreen but have not been able to find one yet.

The bike does not have regen or BMS. After 12,500 miles with very little decrease in range or speed, I am not sure I would add the complexity at the risk of reliability.

Well, it's more a matter of needing to keep up with traffic. Going markedly slower than surrounding traffic is a good way to get splattered all over the road. Though the limits on the Golden Gate bridge are a fair bit slower than the interstate, I'd need to be able to at lest keep up once I hit the interstate. Could the bike maintain 65mph with me weighing in at 275 (and slowly dropping weight over time), plus 60 or so pounds of cargo? (A fursuit, if you're curious)

A 5000-Li on a Bay-Area freeway - now that would be funny to see if it wasn't so rediculously dangerous. You would be just a speed bump, or as I would say a road wart begging to be run off the road.

You need as a minimum twice that power. If you have tons of money, look into test riding one of the new 2012 Zero S bikes. But keep in mind the Zero's performance is less than that of a 250cc bike per comments on this forum. Research tax credits; it used to be available for packs >4KW.

Less money available, the least I would go is one of ZEV's 9200W models. Looks like Zehrbach found a way to stuff 60AH cells into the standard frame. But the Trail version is standard with the 60AH cells. You need the 60AH cells to take advantage of the 9200W controller.

Good luck and seriously forget about the XM-5000 for freeway use.

Thanks for the replies, I'll look into other models. A shame though, the 5000Li looked interesting. :-)

I think you need a maxi scooter on free way,http://visforvoltage.org/forum/12254-erider-maxi-8000w-scooter it is big,smooth,comfortable seat and powerful! 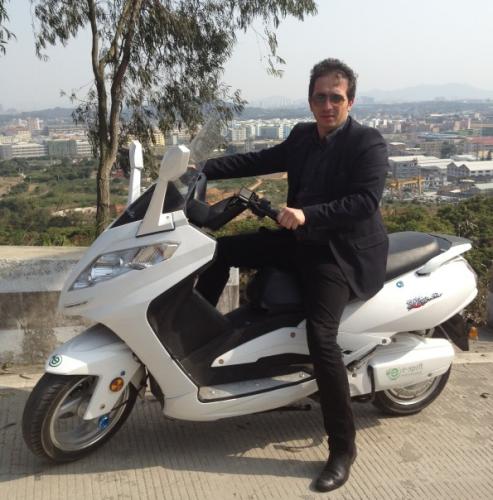 The 5000li wouldnt even come close to those speeds. Even the above scooter with 8000w motor wont do it, even with it's great CHL batteries. You will need either a geared motor or around 16kw (minimum) for that kind of thing.