No, I really mean FORCE dyno and not power.

Power is actually a derived quantity that consists of Force times Velocity.

If you plug in the Federal Ebike Law rules for an ebike you use:

But wait a minute... what happens when I am going 10 mph, how much Power would I produce with a constant Force of 20 lbs ?

Plugging in the numbers we get:

The whole point of this is to solve the age old debate about HOW ebike racing might be regulated so that everyone has the same access to "assistance" from the motor. Notice that I'm trying to get away from Power as a metric and move towards Force.

The purpose is to have a dyno that is simple and easy to understand. If an ebike can lift just under 20 lbs then it is allowed to race as an ebike. If an ebike exceeds the limit then it needs to be adjusted so that it complies with the rule.

This would FINALLY be a way to get something real started in ebike racing.

Power is simply too seductive and we've already seen people with 30 hp ebikes that have made any chance of an authentic sport impossible.

This would make things "as real as real can get".

As a practical matter you would use a programable controller and adjust the Armature Current to a value that is appropriate to achieve the 20 lbs of lift.

Okay.. this is an interesting question I've been having as well. Is there a cheap inexpensive dynamometer that can be used for low end vehicles like electric bicycles.

The closest I've seen -- at the last electric motorcycle race I went to, some of the gas bike racers had this interesting dyno gizmo. It was a small/tiny platform little larger than necessary to put the rear wheel into the thing. It had two rollers, one or both of which was connected by a belt to an automotive style generator thingy. That generator was then hooked to a 12 volt battery.

What it looked to me is that ... obviously running a motor as a generator requires some force, and the 12 volt battery was there primarily to serve as a load for the generator.

This meant that by strapping the motorcycle to the gizmo and running its engine, the rear wheel would spin, causing this generator to run, to generate electricity that's dumped into the 12 volt battery. And the whole purpose of this would be to give something for the engine to push against to provide a more real test of the bike. That's because obviously it's not much of a test to make the wheel spin in mid air, and it's more of a test to make the engine work a bit.

The thing these gizmos lacked was any meter or other measure of torque. But I'd expect you could derive that from measuring the watts produced by the generator.

Well, I'm sure you know that all permanent magnet motors will become generators if you drive them with external mechanical energy. The total output of the generator is a sort of mirror image of how the motor behaves if run the other way. This poses a probem because as we all know motors are not 100% efficient and their performance is actually very sensitive to rpm.

So a generator introduces all the uncertainties that a motor possesses.

Force is different than Power. Torque is the same thing as Force, but it's calculated using radial coordinates instead of linear ones. What I like about Force as the "defining metric" instead of Power is that:

One: Ebike racing needs to find some way to preserve the need to pedal. Force based racing would create the linear type of powerband that would encourage pedaling at low speeds.

Two: Force based racing translates into "constant current" racing that will tend to eliminate all the problems of overheating which prompts people to install motors that are too big. (Etek)

I'm somewhat disappointed how ebike racing turned out up to now. Everyone seems to just jump upwards as far as power and make the whole sport meaningless.

At this point I'm searching for "some way" to create an ebike racing sport that doesn't go off the rails so to speak.

I was talking with a friend who I've know for 45 years and he just thinks that ebikes are "doomed" as a sport here in America because people are always going to want more power no matter how much they are given. Our "me, me, me" culture seems disinterested in a sport that doesn't give power as immediate gratification.

Let's review what is the difference between Force limited and Power limited.

First a chart of how a typical 1000 Watt ebike performs: Now we look at how a Racing mode ebike might look that is based on the Force limiting concept of no more than 20 lbs. 20 lbs translates to roughly 83 Newtons of Force: Okay, now we get into "analysis mode" and figure out what is going on...

First you notice that at 20 mph these motors produce exactly the same output as far as Force and Power. This is the intersection point and it's intentional because we have chosen the Federal Ebike Law as our baseline.

Below 20 mph we see that Force and Power is below the Stock ebike.

Above 20 mph we see that Force and Power is above the Stock ebike.

This is all driven by a simple adjustment in a modern computerized controller. The modern controllers can limit the Battery Side current or the Motor (Armature) Side current and sometimes both. Since motor current defines Force it's a very linear thing to adjust.

The benefits of this approach include:

Pedals become really neccessary again because below 20 mph the Power (the consequence of Force times Velocity) becomes small enough that human input is a significant factor.

One of these days I'll get around to a build thread for the bike.

For now... moved the bike into the garage for winter storage. THAT is one sharp looking piece of kit!! And you can actually manage to pedal in this rather strange posture? The handle bar appears to be considerably lower than the saddle, or is there so much spring travel in the saddle damper that your upper body is more horizontal like on a conventional racing bicycle?

The full story of the evolution of this bike is too long to get into...

Basically the bike is ridden like a BMX bike. Sit in the corners. Stand up and pedal out of slow turns. Sit behind the fairings at higher speeds (no pedaling) in order to maximize aerodynamic advantage.

Years ago I realized that above 30 mph the losses associated with a high frontal area outweigh the benefits of pedaling. You literally go FASTER by sitting behind the fairing than by standing and pedaling. (above 30 mph)

This all blends into the proposed ebike "sport" which would be run on Go Kart tracks.

The Force based motor limitation ensures that at low speeds the pedals are useful.

There have been ebikes with excessive power that cross the line into motorcycling... which is a mistake in my book.

Getting back to the Force discussion...

Using the calculator from before:

1874 lbs of Force would be more than the weight of a full motorcycle.

This means that high powered motorcycles could literally drive straight upwards as there is more power than the force of gravity. No wonder tire wear is the dominant issue with Superbike and MotoGP.

20 lbs of Force is barely enough to lift the added weight of batteries on an ebike. :)

Kind of interesting to look at higher speed:

This all reinforces the idea that Force as the central "metric" fits the reality better than does Power.

When Force is held constant then Power increases linearly with Velocity.

When Power is held constant then the Force decreases non-linearly with Velocity.

One of the curious side effects of a "Force Based Output" derived racing class is that there is no concern with HOW you achieve that Force.

This means that people don't need to go to great lengths to capture those last few percentages of motor efficiency because you end up calibrating the motor Force at the track and this reduces efficiency as a big factor.

Higher efficiency is better because you waste less battery energy (which might allow a smaller battery) but the difference would not be too significant. This is a design that uses friction to interact with the rear wheel of a bicycle.

The advantage of this design is that you can vary the friction and that will vary the Force.

...you can figure out the details.

Define the various constants (Resistance, NoLoad, etc) and then plug this into a spreadsheet.

Some better charts... this time the unit of Force is "pounds" (lbs): 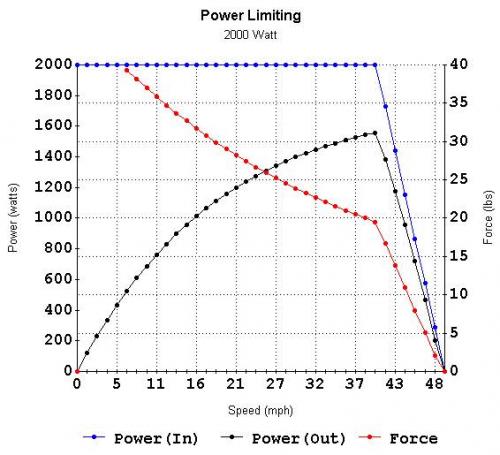 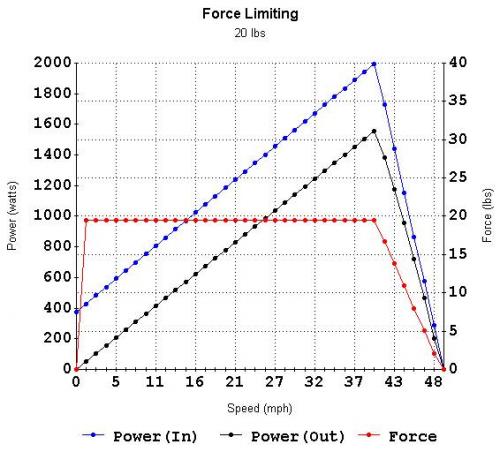 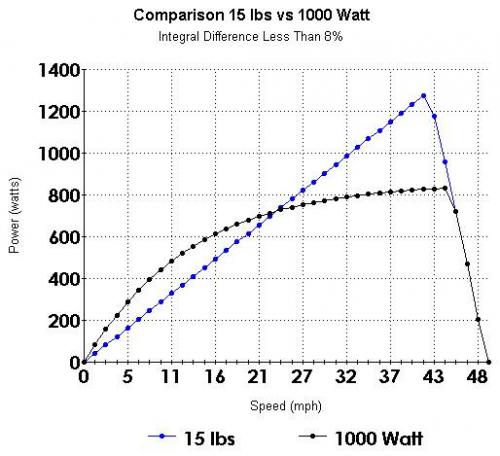 They are within 8% in overall power if you take the integral.

15 lbs is very close to the UK weight measurement called the "Stone": 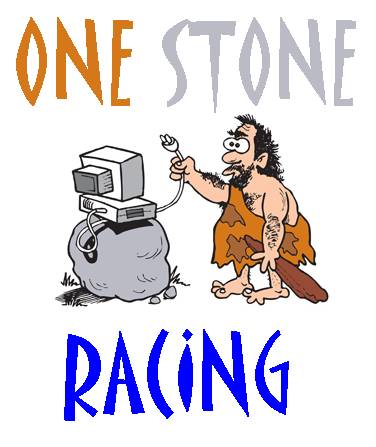 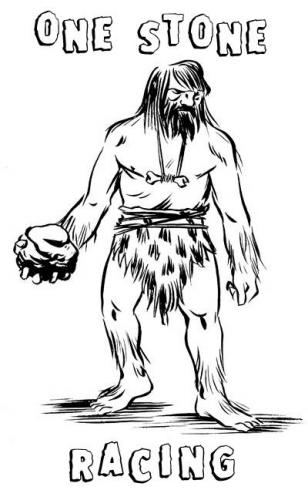 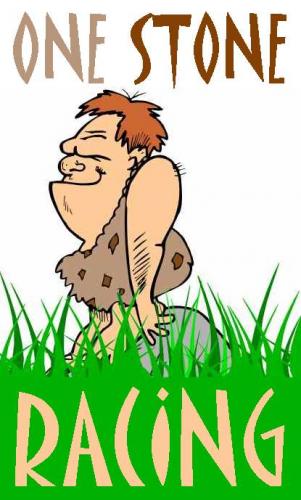 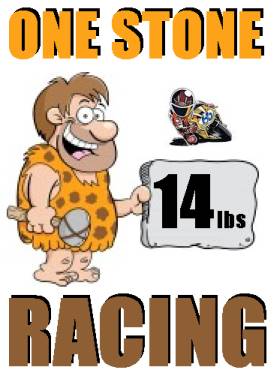 Your pictures remind me of the story about how primitive man used to attack the wooly mammoth; armed only with pointy sticks and really big stones.... 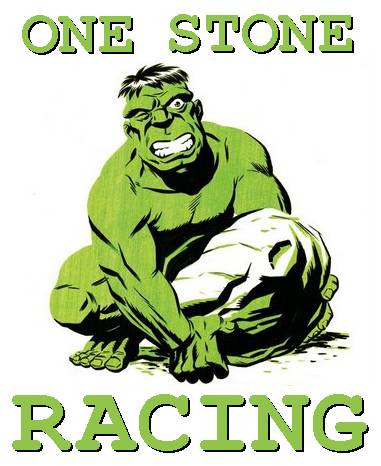 ...1000 Watt input limiting (the first concept) was too hard to regulate.

Force is easy to understand. 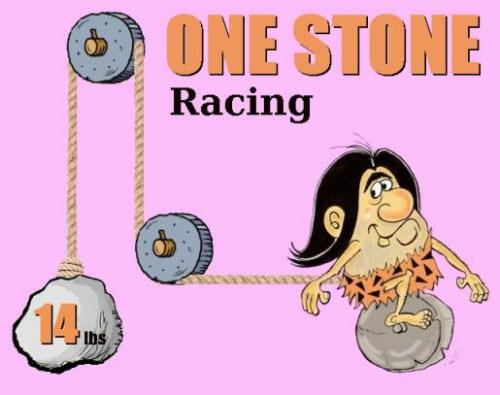 There is a show called "Shark Tank" where people who have a product idea pitch their intentions to a group of investors. It's often the case that what began as a HOBBY had mutated into a sad attempt at making a business. (with pathetic debt levels)

This concept of selling ebikes for racing on Go Kart tracks began for me back in late 2006. At that time the overall economy was booming and it seemed "reasonable" that if I were to stick with the idea that "one day" I might go into business. At least that was always the fantasy.

I have assembled what I think is a fairly good prototype of what my "future product" would look like and what should be the next step is to demonstrate the ebike (at an actual Go Kart track with other ebikes) and then begin the "estimation" of how hard it would be to pull it off and start a company.

Frankly, I don't think I'm up for it.

On the show it is the passion for the product idea and the willingness to work really hard that often is the thing that makes the investors jump in and invest.

If I were an investor I wouldn't invest in "me" because there just is not enough passion.

So I'm just going to revert back to this as a HOBBY.

...just a fun bike for my personal entertainment. 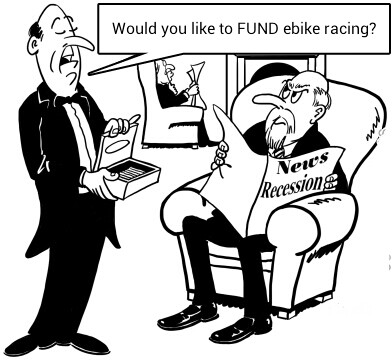 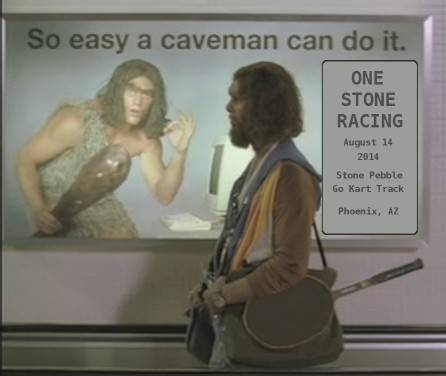 After a long, long time I have finally gotten my ebike (in avatar) running. The Kelly controller seems to default to 100 amps (100%) for my controller, but my motor is only designed for 40 amps. What this means is the designer of the motor "probably" calculated that the core would saturate (or come near it) right around it's rated value. You would expect something like: 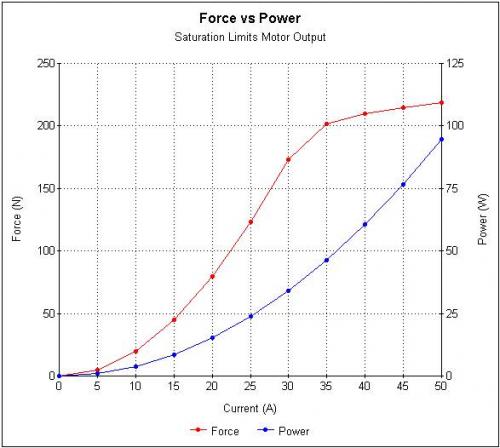 ...which means I'm probably losing most of the 100 amps to heat and saturation: 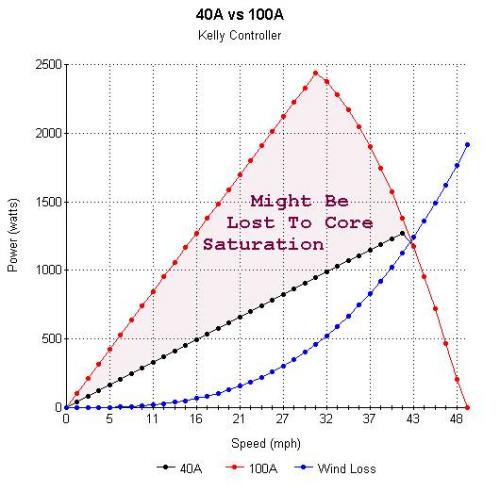