I've always felt that Better Place was doomed over the long term because of a couple flawed assumptions: a) that battery packs would always be expensive, b) that battery packs would always be slow to charge. The company seems to actually be doomed for a different reason: a) poor sales, b) high debt, c) high high cost of building battery swapping stations. 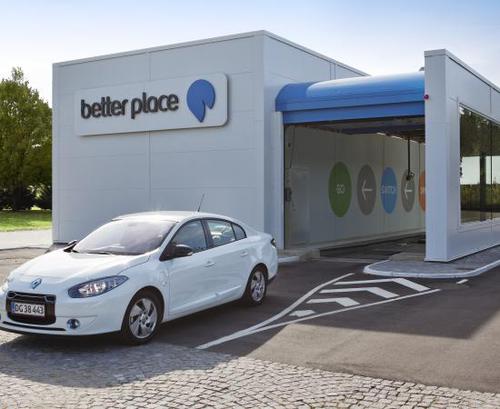 I just posted a news article talking about how Better Place's main investor, The Israel Corp, is demanding that the new CEO Evan Thornley must rewrite the business plan.
http://www.torquenews.com/1075/better-places-and-new-ceo-rewriting-business-plan-under-orders-israel-corp

In mid-October the founder, Shai Agassi, was ousted first from the CEO position and then from the Board
http://www.torquenews.com/1075/shai-agassi-resigns-better-place-board-following-resignation-ceo-post

Since then there's been a major shakeup with several other departures, and the Israeli press running several stories about how badly off the company is. They'd planned to sell 4,000 Renault Fluence ZE's in Israel in 2012 but managed to sell less than 500. The company is running a steeper debt than expected, and investors and creditors are worried over the company's survival.

Which led to a kooky theory of the week posting on my blog asking if Renault is backing away from Better Place.

David, you are absolutely right ! Better Place was always a weird delusion with a concept based on an idea from a late 1950's 'Popular Science' article. What is astonishing is that Better Place attracted a remarkable number of otherwise sensible people as investors. For most of it's history, it's claims were either absurd or fantasies.

Better Place attracted a lot of those who had made money in the IT boom, and it's employees were more like devotees in cult, rather than employees of a business.

Even Thornley is a former Australian politician of Centre-Left persuasion. His mission is to convert better Place into a charging post supplier.

Curiously, Better Place ignored the only practical potential use for battery swapping stations, as fast recharging for EV buses in urban transport systems.

Once again Better Place is in the news for joining up with an equally dubious collection of shysters, Coda.

Between them they managed to scam another $3,000,000 'grant' or gift from the hapless taxpayers of California.

My real objection is that this money is not a loan to some struggling US car company, or start up developing new American technology, but an outright gift to two companies, owed by hugely wealthy oil companies and a group of very dubious PRC,Israeli, American business interests of extremely dubious business integrity and even more appalling reputations.

Dumping the delusional but charismatic, Shai Aggassi, and replacing him with an Israeli hereditary billionaire in the shipping, oil, drilling etc business, renowned for international covert dealings, as chairman is a sinister development

Likewise, getting Evan Thornley, an ex-Australian leftist opportunistic politician renowned for , to put kindly, careless misrepresentation of the truth, to front the scam hasn't improved anything either !

I hate to pour cold water on any EV. But the progress of EV's could would be better of without any of these organizations and individuals. Certainly no taxpayers funds should be 'donated' to these people.

The grant you speak of is something I've covered previously - It seems that I am responsible for discovering the connection between Better Place and Coda, FWIW

I believe given the response from Coda's press person when I asked about Coda's involvement in this grant - that B.P. and Coda were planning to keep that connection quiet. But I stumbled across a contract relating to Coda and this grant .. etc .. her reaction was like "how did you find that out?" FWIW the guy at Better Place I asked for information was very forthcoming on their plans with Coda. I've seen several articles talking about this openly now.

Anyway, I know several people at Coda and am not willing to call them shysters. Most of those I know are the people doing the actual work. They're very committed to the cause, they like the company, they like what they're doing. I had some great discussions about technology with some of them. ..etc.. However - I have seen some of the oil wealthy investors in the company, and I'm not as certain about the upper management as I am about the workerbees. There were arab/investors in March at the opening of Coda's assembly facility in Benicia, FWIW. And the assembly facility itself wasn't all that much - a shed with workshops operated by AMPORTS, a company that specializes in custom modifications to cars. At the time I visited there were 1000+ Chevy WhatEvers on the lot being converted into police cars.

The deal between B.P. and Coda is that Coda is to provide 6 cars to B.P. that will be custom modified for taxi service. The B.P. guy did not respond when asked whether B.P. is looking for a longer term relationship with Coda. I am supposing there might be a plan to do so, later, when Coda's joint venture with Great Wall Motors turns out a car or two. The B.P. guy simply said they're always exploring new car options for the future. However he said this before the whole "Kick Out Agassi" thing came down.

The SF Bay Area eTaxi service is a project that was first announced 2+ years ago, and had been awarded an earlier grant that they haven't tapped into yet. The $3 million adds to that amount. The B.P. guy described it as a project that could now move forward for a variety of reasons, and that the last two year were spent on ground work.

He also wanted me to look into the eTaxi service B.P. launched recently in Amsterdam.

A pre-requesite to the SF Bay Area eTaxi service would of course be locating some electric cars that are compatible with the B.P. battery exchange system AND can be operated in the U.S. In Amsterdam they're using Renault Fleunce ZE's but those aren't approved for the U.S. (so far as I know) and B.P. had to turn to someone.

Is it an outright gift? Hmm... dunno about that - they are going to build some significant infrastructure to do it. So it's not just "here, have some money" because they're having to do something in exchange.

Fast charging isn't quite suitable because of the 1/2 hr - 1 hr required for a full recharge, and the concern over what will happen to a battery pack when fast charged multiple times a day. For example on the Nissan Leaf, Nissan has backed away from the recommendation that it can handle multiple fast charges a day, and is now recommending 2-3 of them per week.

Firstly, let me congratulate you on your journalistic nose for a good story. Secondly, I agree that in most disreputable activities, the 'workerbee's' are often good people.My objection is the very dubious nature of the upper echelon (and partners) of both companies.

Coda is old PRC made glider, from a company owned by one of the PRC's most sinsiter Government owned corporations specializing in everything from illegal weapons sales, to operating 'labour' camps, to a battery manufacturer owned by a giant oil company with subsidiaries dealing in everything from drug trafficking to Human rights violations. Coda's American directors are a collection of luminaries from the worst examples of capitalist business practice.

Better Place was never a good idea, but while privately funded, at least it was only those foolish enough to invest that stood to lose money. I don't feel it's an appropriate use of taxpayer funds.

Is Great Wall Motors any better of a company? In April they announced a deal with G.W. to develop less expensive cars with a global sales/service scope.

1) It's huge investment by the PRC government prior to it's privatization and listing on the Hong Kong stock exchange, thereby enriching certain party officials enormously.

2) It's defiant use of stolen technology and blatant theft of designs.

Better Place is still stumbling badly - and has chosen to pull out of Australia and the U.S.

The short story is:-

The new CEO, Evan Thornley, was fired or else quit in January supposedly after a disagreement with Idan Ofer, the Chairman.

There was a couple rounds of layoffs.

What they announced this week is shutting down everything outside of Denmark and Israel. The purpose appears to be to focus on the countries where they have operational infrastructure, rather than the countries that will require an expensive buildout. This way they can get some footing underneath themselves assuming they can be successful at finding customers.

In other words - cut losses

I have never been able to figure out if Shai Aggassi is a scamster, or just delusional or both !

Evan Thornley, is a former Australian leftist politician. Previously he and his wife made a considerable fortune as founders of internet search company Looksmart Ltd.

He then joined Better Place and underwent a transformation, converting to a sect of the Jewish faith, eventually moving to Israel.

Better Place has always seemed to be run more like Amway, or a cult than a real business. It's business model is based on an old 1950's magazine article, and it's publicity releases, and claims have always been largely fantasies.

Better Place chairman, is Idan Ofer, son of Israel's richest man (deceased) . Idan Ofer and his brother Eyal are Israel's Koch brothers ! The Ofer family fortune is a result of such activities as buying state assets at discounted prices, damaging the Dead Sea and selling an oil tanker to a front company for Iran. In creasing publicity about Illegal oil deals, shadowy dealings with disreputable PRC oil corporations, have inspired Idan Ofer to invest abroad as a safety net against possible political backlash in Israel.

Better Place seemed to be a typical Ofer style tactic to gain control of the Israeli car market, in conjunction with the monopoly power corporation.

Most of the dodgy business practices occuring in the world of EV development (as well as some of the best) seem to have some PRC connection.