I spent the last week flogging the ZEV Electric 10 LRC with the 2nd variation motor. I am now spoiled. I never thought I would like a really big maxi scooter. I preferred to ride the hot rod ZEV T7100 or T10 naked bike with the really quick acceleration, and quick handling for screaming through the turns. But customers asked ZEV for a big commuter bike. So the 10 LRC was introduced. Now its been redone with a big windshield, power plugs for the heated riding gear,even brighter LED taillight, really bright 44 LEDs of daylight driving light, and a higher winding motor. The goal was to move the efficiency curve up higher for sustained Interstate running and to move top speed up. 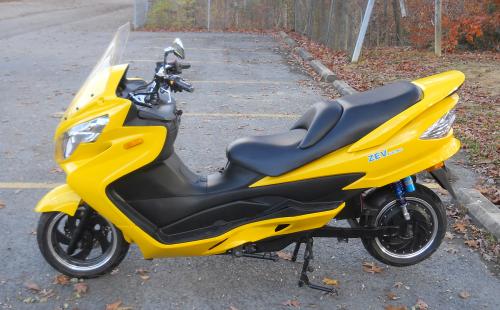 What has spoiled me is the big fairing and windshield (especially since the weather got cold) and all of those compartments all over the bike front end. Now I do not have to put everything under the seat. 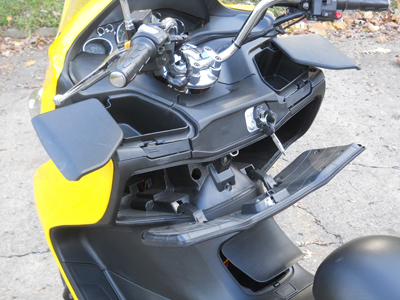 The bike has 28 units of 100 ah battery, 84 volt nominal system. I did not charge it for 3 days riding and it was down to 86 volts. Should have come off of the charger at 95. With this, I hit Interstate I-68 which runs through the mountains S of Morgantown, WV coming up out of a river gorge and climbing and diving across a series of high ridges. The LRC has a full digital speedo and just picks up magnet pulses from the wheel with the readout tied to the tire circumference. The GPS says its right on. Coming out of the ramp and running across the bridge over the lake it settled on 78 mph running up the 3 mile grade. At the top if flattened out for a short period and then the ups and downs set in. Speed dropped off to 78 on the grades, but I also was hitting +85 on some down grades. Full charged battery should help the speed a little more.
The motor is running on 120 amps at 95 volts when it is at max power. 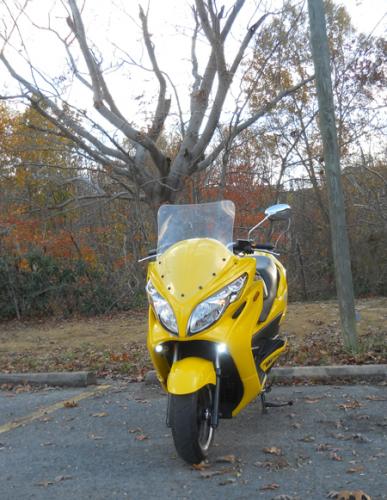 Mostly what I was happy about is after a number of tries at making the windshield shape, the windshield worked right with no helmet shake and buffet.

The new LED taillight is fun. Pump the brakes and cars get off your butt. It is really big and really bright. 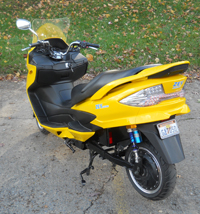 I think ZEV is going to have to keep the original motor with its high torque from 0 rpm as an option for some areas and heavier people until the 25 kw motor is proven out for next year production. But with my weight, the current motor is real good.

Going N on Interstate 79 the terrain still is up and down, but not so much altitude change. Running that from Morgantown to Washington Pa and back is 83 miles on the Interstate (+ 3 miles from the shop and 3 back to the Interstate)while trying to hold the bike steady around 70-75 mph (Pa section is 65 mph speed limit). No problem with 83 miles on the Interstate. I saw a Magellian model airplane GPS logging unit for about $125 that logs the route on Google Earth and the elevation changes. Need to get one of those and create a trip map. You can touch the map and it gives you speed and all the other details at that point. Then I can plot grades against speed.

This bike also has reverse. I never use it, but it there. The throttle has a really really soft first section that moves the bike slower than you could crawl to help keep someone from going zooming off backwards. Then it turns to higher power.

Its supposed to clear up again later this week. I am going to run the 65 miles to Cumberland up and over the Eastern Continental Devide on the Interstate. 2,000 ft of altitude gain and loss climbing out of Morgantown and Cumberland and over the Devide. I want to see if I can touch 90 coming off of Cheat Mountain. That will give me some good data to figure the handling and wind on the 25 kw motor model. We just put 94 mph speed rated tires on all of the ZEV bikes with 13 inch wheels. 94 would really make my day.

That's a real battleship! And boy does this thing look better with a windshield!

25kW from a 13 inch hub motor: I strongly assume it will have active air cooling through bespoke ducts in the rh axle end, or even a water-cooled stator using such ducts?
Reducing excessive heat buildup in the first place (i.e improve efficiency) and then finding effective ways of getting what's left out of the motor housing is of highest importance. And with that kind of power torque might also become a problem, with axles needing to be more beafy, and needing permanent magnets that are more temperature and magnetically stable so as not to be demagnetized on the run...

(Attempt no 2. to get the thread to show up propperly...)

It really does not get hot at all. The motor on the bike described as now being ridden is rated at 10 kw continuous. No ducts. It does have an oil bath cooling.

The 25 kw motor is in refinement. Only 2 exist at the moment. There are no ducts. It was derived from a work trike motor we built but rewound for more speed and less lugging power. We only run 120 amps so there is not really any substantial resistance heating and losses. That is really the trick in these hub motors. Make them as large in diameter as possible as the torque goes up by 4X from doubling the diameter. Get the torque from diameter. When you have gone as far as you can in that direction, double the width. That doubles the torque on the same amps and volts. The axles do not have to be any more heavy as the stator sets still, but you do have to make the drop outs fit really good and keep the axle nuts torqued. The number of bolts in the side cover plates versus what you usually see like on Chinese bikes is 2 1/2 times the number to get more heat transfer into the side plates for more heat shedding surface area. The side plates are finned inside and out for heat transfer.

The 25 kw motor is a double stator motor. That is the direction I am going with all ZEV eventually (all of the chassis have to be redesigned. Shock mounting wider than the existing chassis except on the LRC and T series which were designed for a wide motor). If we can double the torque, we can cut the amps for more range at the same performance level instead of adding battery. We tried this out almost 2 years ago on the little ZEV 2700. The thing climbs hills like nothing else of the size. Now the new light motorbike and bicycle line just starting to show up on the web site in the +1,000 to 2,000 watt range all have the double stator motor. Double the magnet size, double the winding. Lots more torque. Less heat with less amps. 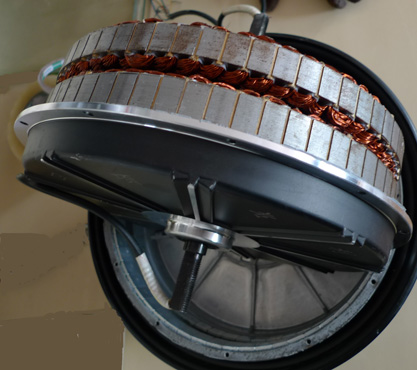 That double stator does intrigue me: What makes a double stator which wastes about 20% of stator width as an air gap better than a single, wide stator utlizing 100% of that width as active electromagnetical material? Let alone the cost of having to wind two stators instead of one wide one?

Less current ist surely the way to go in order gain efficiency, that is correct. I just love it that my 13 inch wheel rim is my rotor :-) Sadly a bigger diameter in-wheel motor won't fit in my swing arm...

I have been fantasizing about a double-sided disc motor design that would have a permantent magnet disc fixed to the wheel rim rotating in the air gap of a ring core and winding inner stator, thus utilizing BOTH sides of the magents (current radial design only uses the inside...) and having almost no magnetic losses. That should make for an extremly efficient hub motor?

But it would need very precise axial postioning bearings and strong geometries to ensure no friciton between rotor and stator...

The dual stator motor is a something for nothing device. The magnets do not know there is an airgap there, nor the windings. The flux fields fill in the gap and act as if it was all magnets and windings.

There was a motor like you show. The issue is that the effective center of the magnet becomes the effective diameter, which is smaller than if the air gap was at the od of the motor. So it turns out to be a wash. it was also a noisy bugger. There was another radial magnet motor with flat magnets like this. Same issues. Sounded like a jet coming down the street. As loud as a gas bike 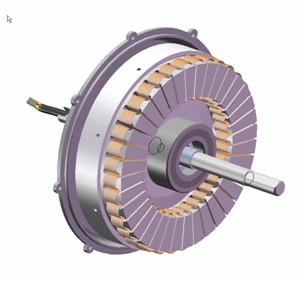 The pic you show seems to be of the stator of a single-side disc motor, lacking the magnetic disc - far from what I am thinking of. It is correct that the effective torque-production radius is slightly smaller in my double-sided disc motor design than in the radial airgap motors we ride.
My reasoning is that this slight geometrical disadavantage is more than outweighed by effectively utilizing BOTH magnet poles AND both core ends of the coil, both of which go to partial or even complete waste in our current radial airgap machines. Plus magnetic losses are reduced to a minimum by the toroidal coil core, just like in toroidal transformers.

Noise is truly a bummer with disc motors, but that all depends on the quality of commutation and on mechanical rigidity. My old-school block-commutating Kelly whould wreak acoustic havoc on the bystanders, but an efficient but gentle vector controller like a Sevcon Gen4 and the likes should tone down the noise considerably.

Back to your dual stator - I ask again: what makes two narrower stators with individual (but identical?) windings more efficient than one single, wide stator of the same outer dimensions and winding? All that air between the dual stator WILL have a detrimental effect on magnetic flux generated by the coils, even though the magnetic field may be able to bridge some of that airgap, which by the way in no way contributes to torque generation like the radial airgap does.

Sorry, I missed the question. We do not see any real difference in the performance if the gap between the two rotors is not big. In fact we see the opposite up to a point. On the bicycle motor, two 25 mm wide magnet and rotors made more torque than one 50 mm rotor and magnet. The difference in percent of torque was just about the difference in percent of the gap to the total magnet width. The "up to a point" statement is because we have not tried to figure out how far we can widen the gap as then its a space available issue and the costs and weight go up because the main outer hub has to have a new mold and is wider and heavier.

The other big reason is pure economics. If you already have a really good performing motor, it is far easier and cheaper to avoid making another big investment in aluminum casting molds for the center and not argue with the other suppliers, to just stack the stators. Testing costs are reduced as you know exactly what the dyno and street tests show you for the single stator.

This same stator stacking is seen in the KLD motors where they have shown 5 stators stacked on a shaft.

Ah, yes, modularity is of course a big plus when it comes to cost effectiveness. Interesting stuff, this! 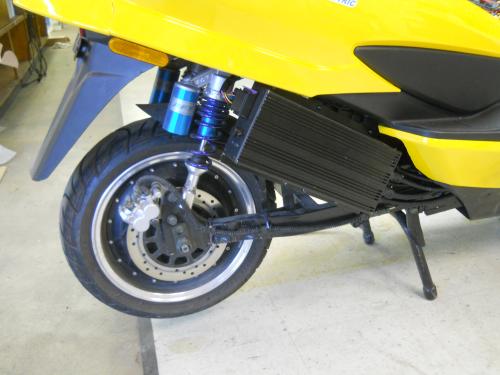 This new controller uses more Mosfet so that we can lug larger loads up bigger hills.