Last year, I was able to purchase 3 Vectrix bikes from a ex-dealer in California.

At the time I was living in France but had the bikes shipped to my home in upstate NY. Last fall I successfully got the 2 new bikes up and running and licensed and used one until the snow came. Range on the bikes was between 50-80 km which I think is close to new specs

In January I moved North to Calgary for a new job and threw the bikes in the moving van with the rest of my stuff. I have just now learned that Vectrix is NOT on the Canada RIV list of vehicles that can be legally imported from USA to Canada. This is a purely bureaucratic SNAFU but prospects look dismal that I will be able to over come this one. My only hope lies in convincing Transport Canada that they should grant an exemption for reasons yet TBD. (not expecting this to end well....)

I see my options as:

1) Part out the bikes and sell the bits over time now that Vectrix is again defunct.
2) Find a US buyer and ship
3) Find donor bikes with valid Canada registrations and rebuild with all new parts

2 of the bikes are essentially new (300 and 800 km), the third is functional but without title and has several thousand km. I have kept the batteries topped up over the winter and they are sitting happily in my garage in Calgary.

I have had a couple conversations with the nice folks at Transport Canada and they have told me that they would consider allowing the importation of the bikes if I could provide a letter from Vectrix stating that the US spec bikes meet Canadian safety standards. It would need to be on Vectrix letterhead and signed by someone from Vectrix.

1) If US spec bikes were the same as those sold in Canada?
2) Is there someone left at Vectrix who could provide a letter?

I have sent an email to any Vectrix address I could find but have not received any response to date.

Still some faint hope but it doesn't look promising.

I bought a 2008 VX1 five years ago from All Season Motorsports in Calgary and have been riding it year round ever since. They aren't dealers anymore but were able at the time to get Transport Canada approval for the bikes they did import. My VX1 has the Canadian Motor Vehicle Safety Standards decal and is fully approved for licencing and insurance here in BC. Perhaps if you called All Season they might be able to give some hints as to how they obtained their approvals, and a reminder to Transport Canada that they have already approved the VX1 for sale and use in Canada might help you as well.

I bought a 2008 VX1 five years ago from All Season Motorsports in Calgary and have been riding it year round ever since. They aren't dealers anymore but were able at the time to get Transport Canada approval for the bikes they did import. My VX1 has the Canadian Motor Vehicle Safety Standards decal and is fully approved for licencing and insurance here in BC. Perhaps if you called All Season they might be able to give some hints as to how they obtained their approvals, and a reminder to Transport Canada that they have already approved the VX1 for sale and use in Canada might help you as well.

I had a closer look at my bikes and it is pretty clear from the VIN label that they are compliant with Transport Canada requirements. 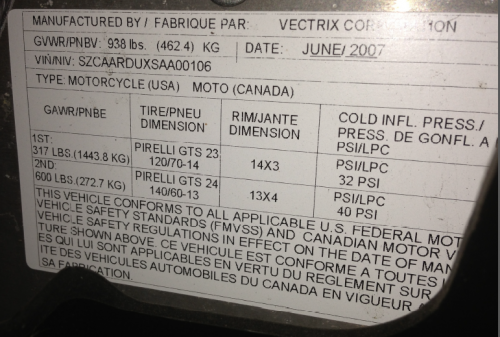 I have sent this info to TC to see if they may consider this as sufficient evidence to allow me to import the bikes.

It looks like my days as a Vectrix owner are over.

After a lengthy back and forth with Transport Canada I have hit what appears to be an unsolvable issue. The VIN numbers on my specific bikes don't conform to Canadian standards. Apparently Vectrix resolved this issue in late 2007 and all bikes brought into Canada had the corrected VINS.

Unless Vectrix would recalculate and issue replacement VIN numbers, the bikes will never be registered here.

I have 2 effectively new bikes and a working parts bike sitting in Calgary, Canada. Anyone who has interest in these bikes is welcome to contact me. The one bike (Green) is currently registered and insured in NYS. I have a clean title for this Bike. The second (red) has never been registered but I have the original COA which I can sign over. The third (Silver)does not have a title and was bought for spare parts. Nearest border crossing is Sweetgrass Montana (3 hours) and I may be willing to transport the bikes there to facilitate the export process.

Alternately, if anyone is aware of a donor bike in Canada, I may be interested in rebuilding it with new parts so I can register it here.

Last option is to part the bikes out. Anyone have any thoughts on value of new bikes for parts?

The compliance statement from the manufacturer on the attached labels, although affixed with the best intentions of meeting compliance, bring to our attention non-compliance to both U.S. Federal Motor Vehicle Safety Standards (FMVSS) and Canadian Motor Vehicle Safety Standards (CMVSS) with regards to the VIN number. It appears the units, both manufactured in June and September 2007 were assigned non-compliant Vehicle Identifier Numbers (VIN). Upon researching U.S. World Manufacturer Identifier (WMI) records, it shows the manufacturer actually re-submitted proper VIN calculations to the National Highway Traffic Safety Administration (NHTSA) on Sept. 27, 2007 to address the issue (See attached document entitled Vectrix NHTSA VIN Breakdown.pdf – it corresponds to document ORG6167 on the Web site when you search using the manufacturer name Vectrix).

As both the Canadian and American standards 115 for VINs are identical, it means the units also failed to meet Canadian requirements prior to Sept. 27 2013 as bears evidence of the compliance labels on both your motorcycles. So we have a situation here where a manufacturer, with all the best intentions in hand, underwent the process of manufacturing and self-certification process of electric motorcycles for the North-American market for which they hit a snag with regards to meeting FMVSS 115 (and subsequently CMVSS 115) at start-up.

The problem lies now that although the United States may tolerate VIN errors in certain circumstances, corrective procedures in other circumstance like this one may be more tedious (see attached document entitled VIN ERRORS.pdf). In Canada, with vehicle importation regulated at the federal level, the options are limited. Therefore, unless the manufacturer still maintains a presence to allow someone in charge of compliance to issue a VIN recalculation as per the VIN scheme they provided to the NHTSA on Sept. 27 2007, these two particular units do not qualify for importation into Canada under Section 7(2)a of the Motor Vehicle Safety Act.

Man that sucks. Is there even one person left at New Bedford who could help?

Damn. I'd have been willing to trade my defective ZEV and some cash for one of them before you left here, had you known about the issue. I think you should look hard for a Vectrix or two with a 'legal' VIN there first.

Yeah, I bought my 2007 in 2009 from a DEALER when the FIRST bankruptcy went thru. I spent almost 6 months w/o plates as the dealer could not get it registered and they finally told ME to get it registered. I found that official Vectrix letter here saying there was a mistake on the VINs on those models, then the DMV was willing to inspect the bike and confirm that the letter accurately reflected the VIN. They are rather clueless and I ended up with it being listed as a 2009 bike. They also had great difficulty registering my 2000 Honda Hybrid so nothing new with California DMV.

Don't know what I did with that letter after I printed it to take to the DMV, it must be here somewhere, but then this is back in the day when Scott from Vectrix UK was giving ALL SORTS of support to buyers before he got the axe in the first round of bankruptcy. I got stickers, and a replacement seat spring, just by writing about it here. Then I got a new battery pack when New Vectrix was formed by writing about it here too. This used to be the place for Vectrix employees, not sure where they are now...