If you haven't seen this, here is probably the best (and maybe final) chance to either get a new Vectrix or a lifetime supply of spare parts.

Does anyone know who/which entity ended up with proprietary rights for the motor and other patented components?

Are they are auctioning the 80 scooters as a lot or individually? Would these all be with Li packs?

Hmmm... I may have to make the trip to MA for this!

I doubt NiMh packs and bikes will be auctioned, but there may be leftovers...

I too am interested to find out who has the software and designs. I don't know how bancruptcy works in terms of intellectual property like the Vectrix name, designs, software, etc. - is the parent company required to sell these too? Would be really nice if they became open source, or at least someone who is willing to support the Vectrix community buys them. I wonder if the software will be on some of the computers being auctioned - would be nice to buy one of these configured for development and give a copy to someone like the Laird!

The last sentence of the Facebook announcement suggests that they are still looking at their options with regards to the Vectrix IP:

Vectrix Official Site
Gisteren om 21:00 ·
I’m sad to state that on March 31, 2014, Vectrix LLC filed a chapter 7 bankruptcy petition in the U.S. Bankruptcy Court for the District of Massachusetts and I was appointed as its Chapter 7 trustee. The case number is 14-11381-WCH. I’ve had a chance to see the different motorcycles; the VX-1 and VX-2 and the very cool VX-3 with its stable three-wheel configuration. Unfortunately, the company has shut down. We will be auctioning off the remaining assets on June 18, 2014, at the company headquarters in New Bedford. Paul A. Saperstein & Co. (www.pesco.com) will conduct the auction, and on-line bidding will be available. The assets being sold will include 75 complete Vectrix all electric VX1, VX2 & VX3 Motorcycles & Scooters, about 100 new Lithium Ion batteries suitable for use in Vectrix cycles, and more than 1.6 million dollars’ worth of replacement parts. In addition, the auction will include electronics, office equipment, assembly plant machinery and an extensive selection of machine shop and manufacturing equipment. Paul A. Saperstein & Co.’s complete auction guide is available online at http://bit.ly/vectrix. We might also include any available intellectual property and other intangible assets. - Warren E. Agin, Chapter 7 Trustee.
Vertaling bekijken

What on earth are these?

It should be police scooters designed by extreme greenmotor ....

I wonder what the price for the VX-1 will go for ?
any speculation ? I wonder if they will go very cheap due to not being able to get anyone to work on them in the future ??

I think I may go just to see it all.

Too bad they are doing ONLINE auction. They should make it only in person, that way maybe I could get one for only $2000 :) 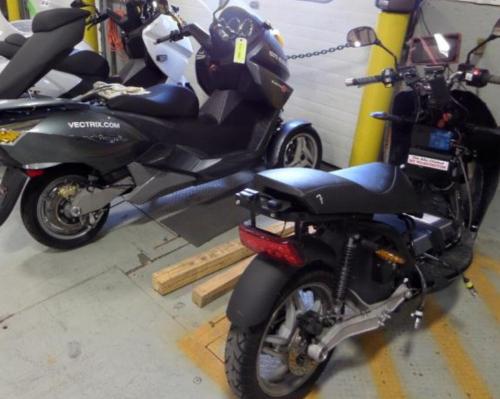 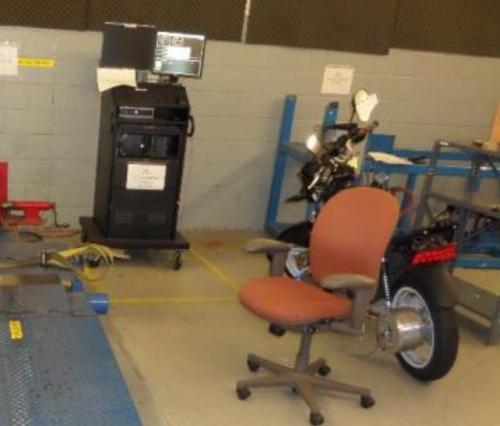 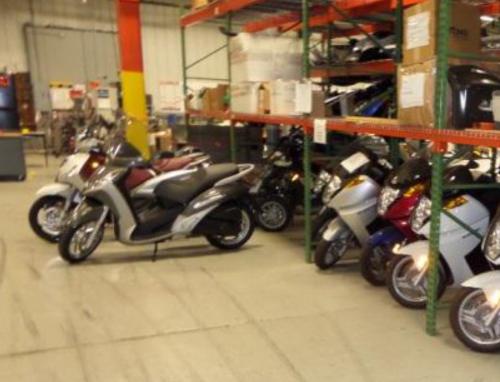 What happened to the VT-1? There are none in New Bedford? And the writing on the auction makes it sound like they have over 100 batteries, but they MUST mean over 100 battery packs. Oh, and the Vectrix Fuel Cell, there must be a prototype sitting around. Yeah, no, likely the staff got all the real cool stuff.

Strange there are no X Vectrix employees here, where else would they go to talk about their work?

I worked by way through the online catalogue and did not see any VX3. There was a gas Piaggo MP3 and three racks of boxes of VX3 spare parts but no listing of which parts. I had heard that Vectrix built 100 VX3. I saw one at a dealer but he said he was not allowed to sell it and was being forced to return it to Vectrix. Anybody have the real story or know what happened to any VX3?

LAST CALL FOR ANYONE...
WE BOUGHT ALL THE BIKE AND SPARE PARTS AT VECTRIX USA HEAD QUARTER, WE ARE STARTING TO PACK EVERYTHING AND MOVE IT TO EUROPE, IF ANY DEALER OR CUSTOMER NEED SOME BIKES OR SPARE PARTS, PLEASE CONTACT US ASAP.
AFTER TRNSPORT AND CUSTOM CLEARANCE YOU WILL NEVER BE ABLE TO GET PARTS AT THE ACTUAL PRICE...

- AVAILABLE ON SITE COLLECTION TILL 3 JULY 2014

Good to know Vectrix Europe is OFFICIALLY on the road, I desire you the best.

About the spare parts... I need a pair of 60-90Ah batteries, and a slightly customized MC firmware...

By the way Matteo - we forgot my brake pads (front and rear!) If someone from MD/VA/DC orders something from you in the next days, can you add that to the order and let me know who that is so I can pick-up from them? Good meeting you, Piotr, and the moving crew there over the weekend! Hope the rental car company will not give you trouble for the blown tire ;)

There was something very weird about this auction. I was there for the open-house inspection, I was there during the entire bidding process, the auction was closed before the bidding ended, lots 1001 through 1009 did not make the bidding table (the auctioneers where actual standing on a ladder), I was there several times after the auction to make offers, the entirety bid of $280K fell through, a new forum member called VECTRIX_SERVICE pops up stating "Last Call for parts". My question to other forum members is...Did anybody that make and won a bid for items in lot 1A actual get what they bidded for??

What happened next puzzles me and I suspect may have been planned all along by unscrupulous bidders, but I have no proof or information, just guessing: one of the investors backed out (the Dutch one, I was told, supposedly bidding together with the Polish folks). So the entirety bid fell thru. I suspect this way the parts and bikes lots were sold to the remaining entirety bidder at a much lower price than what the original entirety bid was. The rest of Vectrix I'm guessing was not of great interest to those who bought the parts and bike lots anyway, so I think they got a good deal at the end... Again, just a conspiracy theory...

The liquidators started calling/emailing individual bidders, honoring their bids, and asking them if they still wanted their items. If the bidders wanted them, they could buy them at their bid prices. I did.

Piotr and Matteo (the other entirety bidders, who did not back out) bought most if not all of the spare part lots and the lots of bikes that were not listed as individual bikes (e.g., they bought the 10 or so in the front where the VX-3 were, the dozens of bikes in the back in the assembly line room, etc.).

I wanted spare parts and asked the liquidators for the contact info of Piotr and got it from them. Got in touch with him, met him and Matteo, and they sold me whatever I wanted at what I consider reasonable prices (not dirt-cheap, but at pretty good savings off retail).

I suspect they are the ones who posted here about the final days of the sale. Everything they bought is going to Europe - they were packing it over the weekend when I was there to pickup my VX-1 and parts.

Well explained, Kocho. I think your speculation about buying strategy makes sense. I hope that is what it is.

I was there on Monday picking up my blue and white 2009 lithium VX-1. Piotr and Matteo were running on fumes, I'm sure having worked ungodly hours for days on end, yet they took the time to look over my bike with me despite having no skin in the game. They advised what I should do about the lo cell reading, showed me which battery I needed to buy to replaced the cells, then loaded the bike on a pallet, then onto my U-haul with a fork lift. This was all well after the auctioneers who had made money off my purchase had left the building. I can only wish these hard-working guys the very best of luck. I should have given them a tip, but I had already more than emptied my wallet buying a windshield and batteries

Another person who had bought several empty frames, bikes, and batteries was there gathering his stuff. In order to help me out, he sold me the batteries I need for my 2007 battery as well as for the 2009 lithium battery, at pennies on the dollar, in the end trusting me to mail him the remainder of what I owed him. All in all, an encouraging experience dealing with over-tired and still helpful people.

While I was there, Piotr received some bad news, I think having to do with the movers being days later than planned. They seemed quite bummed about this.

If that post was from them, as it must have been, then I say trust what they say and do anything you can to help them. Crystal, the last of the Vectrix employees, said these guys are the sole reason Europe doesn't completely hate Vectrix.

Btw, Piotr has promised to develop a BMS system for the lithium batteries that are packed in 6- and 7-cell configurations (sorry, I don't know much about this), which would enable a bike to get 80 to 90 miles. He said this would take about six weeks.

Hanging on by my fingernails, technically speaking.

Piotr finally got in touch with me and yes, he is running on fumes. He told me to come to the warehouse and I can get some spare parts for my VX-2s. I just returned from New Bedford with a trunk full of good stuff. Piotr was generous with his time and he helped me pick out parts that I might need in the future (at a fair price). Kudos to Piotr and I wish him a safe trip home tonight.

I wondered what happened to the auction. I was not able to get the day off :( would have liked to go and just look as I am broke :(

How many people where there to auction, out of curiosity.