Fitting a main stand to a VX-1

Earlier today I received my mainstand from Vecxtrixparts.com so I thought I would take a few pictures while it was being fitted to demonstrate just how easy it is to fit in 5~10 minutes.

With the bike on the side stand I first removed the right hand side panel by removing the single fixing screw at the rear: And then lifting it out from the front fixing slot:

I then removed the four 13mm bolts from the underside of the swinging arm ready for the stand to be fitted.

The stand fixing bracket does not have a built in stop to prevent the stand from coming up too high, instead it is pulled up by the springs until the small rubber buffer on the top of the foot operated lever touches against the underside of swinging arm.
To make it easier to fit, I carefully pulled the stand fixing bracket away from the stand just far enough to insert a 3" block of wood to hold the stand in a partially open position as shown here: I was then able to simply hold the stand in the correct position and refit the four fixing bolts that I had previously removed: I threaded all four bolts all loosely before gradually tightening them securely, but I had to put the camera down as I was running out of hands.
If you don't have a long enough extension between the ratchet and the socket (or you are using a ring or combination spanner) you will probably need to remove the left hand side cover to tighten the two fixing bolts on the left hand side.

I then pulled the stand down slighty to remove the block of wood before lubricating all the moving parts with some spray grease to help reduce wear as shown here: I refitted the side panel and tested the stand.

The bike is not too bad to place on the main stand compared to my 750 Hondas (which weigh slightly more than the Vectrix) and it is very secure on the stand.
However, getting it off the stand proved to be a lot more difficult than I expected.
I found it very difficult to take it off the stand (while seated on the bike) because it is not really a "Centre" stand so you cannot rock the bike and use the inertia of the rocking bike to help move the bike off the stand. Without this assistance, you have to push really hard on the handlebars before the bike will come off the stand.

It now gives a bit more room in the garage with the scooter parked upright instead of leaning over on the side stand, and it also makes it a lot easier to check the rear tyre pressure, as I can now simply rotate the wheel to bring the valve into a suitable position to attach the airline connector.
It should definitely make the next tyre change or puncture repair a lot easier too.

Excellent Instructions :-)
As for this:

Why not push the bike off the main stand while standing beside it - that should make it quite a bit easier, even though I know the VX1 is quite a chunk even without a rider on it...
That is how I do it twice a day with my Thunder, grip it at the back with the right hand, and while slightly lifting the back to lighten the load on the main stand pushing forward and keeping the bike straight with the left hand on the handle bar. It also takes some effort, and using your own weight's inertia also helps to get the job done :-)

That is so cheap I highly doubt it worth even puttting thought into building your own, Ben?

HI BEN, I can or have fabricated almost everthing out of steel and I say also buy the new one, it's not worth trying to make this nice stand

I just checked the link, and that does seem pretty reasonable. I think that last time I was looking for a stand, I couldn't even find one available for sale. Fabrication is a great alternative when there's no availability.

Yes BEN fabrication is the only thing you can do when no one makes what you want or need and that's why I made my on (VX-4 STABILIZATION SYSTEM) because no one else does.

Hello, this is the first time I write here, but I've been reading a lot.
Written in silly moments, because I have made a central support for my Vectrix, I did about two months ago, because here in Spain the issue of supplies were a little scarce and the cost was very high, now has appeared a company Poland seems terner cost prices, but I was already in the process of manufacture and have finished angle perfectly functioning until today. 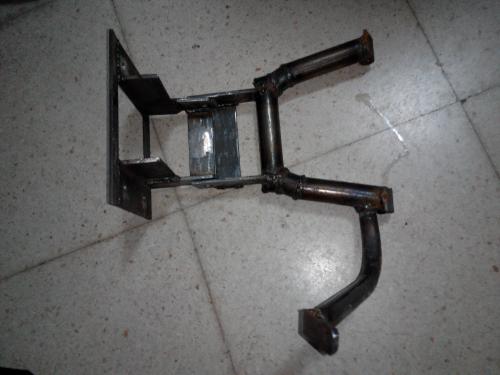 I will try later send more pictures and also pictures of the trunk that I made it, which can mak dezplazar inside so the bike to distribute the weight and avoid breakage of the bike support colin

Wellcome! Good to see you here superbmanolo!
Don't hesitate to post the other pictures, they,re a DIY masterpiece!

I could use some pictures of attaching the side stand. Mine was coming loose so I tightened the one screw you can get to, now, a year or so later it was coming loose again, I went to tighten it up and the screw you cannot get to fell out of the bike! Glad I caught it and it is now tight with the one screw, but I cannot figure out how to remove the plastic cover. Is there a good take apart guide for the body?

I just received a center stand, which arrived within three days from Poland! This guide made installation a breeze, especially considering the stand came with no instructions. And having the stand should make battery and tire replacement much easier.

I just wanted to add one comment. Because the swingarm is alloy and there are no lock washers present, I decided to use removable thread locker (e.g., Permatex or Loctite) on the bolts. Hopefully this will eliminate any chance of the bolts loosening.

Hi, I recently received the central stand from Poland and I use the instructions from Service Parts download. http://shop.vectrixparts.com/center-stand-assembly.html