I just received the cells for my booster battery today. In the end, I chose some Multistar 16Ah cells. These are capable of 10C sustained, and 20C burst up to 10 seconds. I bought 36S worth of the cells for $450 USD, which was the decider - It was going to be $900 for 3Ah of LTO that would last forever, or $450 for 16AH of LiPo that would last 2, maybe 3 years - Remembering that's all I need it to last for. (Moving to another country in 2 years time)

These cells have been rated around 0.8-1.2mOhm per cell, so I should be able to get a pack with around 30-40mOhm internal resistance. This is compared to the current pack which is estimated at 400mOhm (based on the Cycle Analyst and voltage sag). This should result in a much zippier bike, and hopefully more range.

I've been trying to watch videos by the guy at 300mpg on how to remove the battery to get an idea of how I can tap in. I can't tell 100% from the video, because he skips so many steps, but it looks like the original NiMH battery has a SB120 blue to join the two packs, and in the video, bare wires for battery/controller connection? Searching this forum suggests that they're Anderson plugs, but no indication whether PP, SB, and whether 120A, or bigger. Can anyone clarify what size and type the connector on the controller/battery cable are? I am guessing SB120 grays as the most common type, but haven't seen any photos to confirm.

So, my other questions are:

1. How to parallel the booster? I'm thinking one of two possibilities: (a) use a SB??? double adapter. (b) Put a second eye terminal on the existing pack, and run an 2AWG cable to the helmet storage, and put the LiPo pack there.

I'm thinking (a) makes it more universal (I.e. no matter what pack I have in the future, as long as it has a SB??? connector, it will fit), but will be more work. I also need to strip the bike down once to order parts, put it back together, then strip it down again to insert the cable.

I'm thinking (b), if done very carefully, would mean that I could keep the controller "live", while I insert a second cable, so that there's no issues with current inrush. Speaking of which...

2. Do I need to do any kind of inrush current control? From what I've read on the board, it seems like the bike already has inrush protection. From other threads, people are talking about using light globes as an inrush protection. If I do need inrush protection, the Y connector is looking better - Connect up the LiPo pack through the light globe, quickly connect up the main pack, then remove the light globe and plug in the booster pack. Doing it with the eye terminal method would rely on never losing continuity. If I slipped, ever for a second, not only will inrush be a problem, but there will be an almightly 150v spark when it reconnected.

I'm probably overthinking and over-planning this, but now that I am reliant on the bike as a daily commute option, I'd be loathe to open it up, and find I need to leave it apart for a few days to a couple weeks waiting on parts. So I appreciate any hints, tips and advice in making this a smoother upgrade.

I would just add an Anderson to the nimh battery + and - terminals.
way less hassle (I actually have this on my bike to allow dump charging)

If you disconnect the motor controller, yes you will need to pre-charge the MC again.
failure to do so has a 1 in 20 chance of damaging the MC caps

Here is a rough diagram as to what I am suggesting: 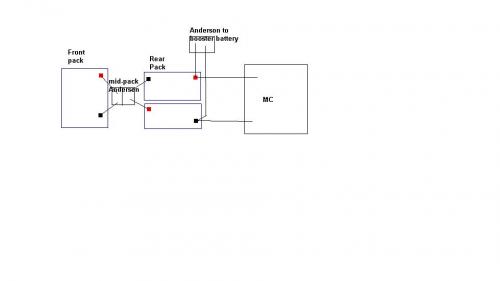 You will need to make an Anderson connector, with eye crimps on the leads to bolt directly to battery positive and negative.
I would suggest putting a fuse in there too (the 125A from when you upgrade the MC fuse to 200A would do the trick)
I would use at least an SB125 if using a 125A fuse (or 2 x SB50's)

Thanks Antiscab. I have installed the cable successfully, at the positive terminal of the battery, and at the shunt for the Cycle Analyst.

There was already an inrush current controller on the bike from the old owner, and it worked perfectly - Not even a spark when I connected the main andersons.