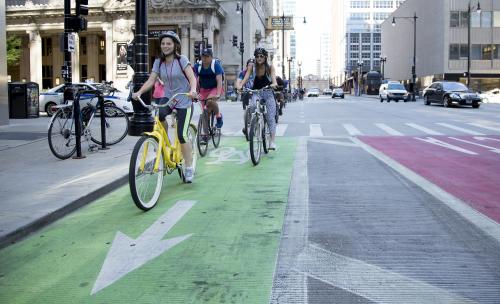 CHICAGO — It is often faster to ride a bicycle through Chicago than to take an Uber or public transportation, find researchers at DePaul University’s Chaddick Institute for Metropolitan Development. In a new study, “Policies for Pedaling,” researchers track the relative speed of bicycle travel, analyze the behavior of cyclists and recommend policy changes that would accommodate the growing popularity of cycling on city streets.

In addition to being fast, many cyclists engage in safe riding behavior at intersections that is often not consistent with the law, find DePaul researchers. At four-way stops, just 4 percent of cyclists came to a full stop. However, many cyclists slow down to yield at stop signs or stop then proceed safely at a red light — a practice enacted in Idaho in 1982 that is commonly known as the Idaho stop.

"Some of the rules of the road for biking are out of sync with the realities of the way people move from place to place,” said Joseph Schwieterman, director of the institute and a co-author of the study, adding that the Idaho stop is widely considered to be safe. “This study draws attention to practical ways to deal with these problems — one of which is explore allowing the Idaho stop at four-way stop intersections." This change could allow law enforcement to focus instead on cyclists who pose legitimate safety risks, said Schwieterman.

DePaul graduate students Jenna Caldwell, Riley O’Neil and Dana Yanocha are co-authors of the study, which calls for Chicago to lower fines and offer diversion programs to cyclists.

“While Chicago has made tremendous strides in building bike infrastructure to accommodate the ever-growing cycling population, policymakers should continue to improve upon and implement policies that keep riders safe,” said Caldwell.

Researchers conducted field observations of 875 cyclists in Chicago and found:

At traffic signals when there was no cross traffic, 65 percent of riders made an Idaho stop — stopping then proceeding through the intersection, even on a red light.
When cross traffic was present, 66 percent of riders made Idaho stops at stop signs, and at traffic signals 78 percent followed the law.
In separate observations, researchers concurrently set out on routes through the city via bicycle, Uber and CTA buses and trains to see which was fastest. Researchers found:

Biking proved faster than public transit on 33 of 45 trips. It was especially faster in travel between neighborhoods, as opposed to trips in and out of downtown.
Biking also offered greater predictability – bicyclists can generally predict travel times within 5 minutes, while those using the CTA and UberPool tended to experience much more travel time uncertainty.
The researchers recommend that policymakers do more to manage the flow of bicycle traffic, which they note “will require more attention toward creating enforceable rules and improved policies for issuing citations.” They also commend Chicago for having an explicit policy for issuing citations to motorists who put bicyclists at risk.

"The remarkable rise in bicycle travel in Chicago should be celebrated as one of our city's great success stories of recent years,” said Schwieterman. “This success, however, is creating a need for new strategies to deal with the traffic flow on regular streets, bike lanes, the trails."

The Chaddick Institute for Metropolitan Development at DePaul University contributes research and educational programs that enable visionary planning in Chicago and beyond. The study “Policies for Pedaling” can be found at http://bit.ly/chaddickresearch .

The closest I have come to a significant accident in 11 years or riding electric motor scooters was when a bicyclist breezed at considerable speed through a red traffic light and almost collided with me. I have to obey traffic signals. They can too.