My Car of the Future, Today

My Car of the Future, Today 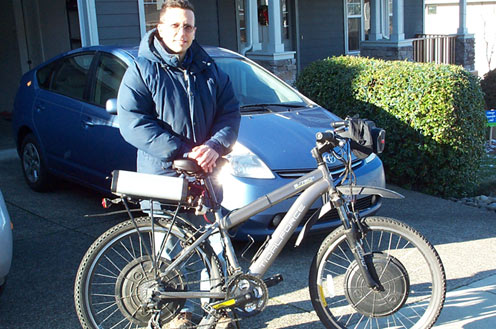 My wife and I have a 2002 Prius and a 2006 Prius, and I also own an electric bike. As I'm sure you know, the Toyota Prius is a hybrid vehicle combining a traditional gasoline-powered internal combustion engine (ICE) with an electric motor. The basic idea is that the ICE powers a generator that charges a battery that drives an electric motor that powers the wheels. Under times of high power demand, both the electric motor and the ICE can directly power the wheels.

Our newer Prius gets about 43 miles per gallon in the winter and about 48 mpg in the summer. Our older Prius gets about five mpg less. The advantages of the hybrid design are: the ICE is only run at its most efficient rpm, improving mileage; the electric motor can handle low-energy, low-speed driving situations by itself, without assistance from the ICE; during braking, kinetic energy can be converted back into electrical energy, using what is known as regenerative braking.

(I don't own stock in Toyota, however I should add that apart from the technological marvels, Priuses are also very well-made cars that, in my opinion, handle well, are comfortable, and are a lot of fun to drive. However, I realize this is a matter of personal taste.)

I also own an electric bike manufactured by Tidalforce, a company that is now defunct, but was a subsidiary of Wavecrest Labs (www.wavecrestlabs.com/). I purchased the bike about 1.5 years ago. It has a 1000-watt motor, and it can go 20 mph on level ground unassisted. Of course, when you pedal, you go a bit faster.

It's really fun to ride. Plus, it's totally silent, so people can't really tell that the bike is electric as I'm whizzing by. As a result, people have thought that I'm a far more athletic bicyclist than I really am. My work is three miles away (I'm a radiologist at Kaiser Permanente), and for about five or six months of the year, I can bike to work, weather allowing. The built-in battery gives a range of about 20 miles with relatively gentle driving. More aggressive driving and driving on hills, not surprisingly, decrease range. An optional expansion battery (on the back) doubles the range. My batteries recharge in about three hours and are supposedly good for 500+ cycles.

Needless to say, the reason I'm so involved with "alternative" / green methods of transportation is, I'm sure, the same reason that motivated NOVA to do the show, namely, grave concern over the future of life on our planet. People do not seem to realize that if our current course continues, soon polar bears will cease to exist and Florida will be basically under water. Tremendous loss of coastline will occur worldwide, causing unprecedented destruction and pollution. We are at risk of entering a vicious cycle in which loss of polar ice leads to greater heat absorption from the sun, which leads to more loss of polar ice, etc. Billions could starve as global precipitation patterns change, disrupting agriculture; Asia is particularly at risk. The future does not look good. Earth is at risk of becoming like Venus.

Yet, people seem blissfully unaware of what scientists are saying. Hopefully NOVA's show will raise awareness of how important the transportation sector is to greenhouse gas production.

See other Cars of the Future, Today.

However, he should also say that the fuel economy figures he quoted for his expensive Prius are no better, and even worse, than one could get from some of the cheapest cars available, notably some Honda Civic models, in the early-mid 1980's. So, the manufacturers are still not giving people in the US with moderate incomes some real alternatives.