Winds of change are blowing in northwest Missouri

Built in 1937 by a gas station owner named Rufus Limpp, the 25-foot tall,
fire-truck-red replica of an electric gasoline pump once beckoned motorists to
"Buy Gas Now." It now sits in front of the King City museum.

From the wooden steps of the museum, tourists now can get a good view of the
town's newest attraction: 27 wind turbines rising about 300 feet from the
ground, their blades, about the length of a football field, pushed into motion
by a steady breeze.

The Bluegrass Ridge farm is the first commercial wind project to open in
Missouri. The wind farm could produce about 57 megawatt hours of energy —
enough electricity to power 34,000 homes.

Missouri joins about 32 other states, including Illinois, in developing wind
energy, a source of renewable energy that doesn't produce air pollution that
contributes to global warming. A recent Supreme Court ruling found that carbon
dioxide is a pollutant and can be regulated. Consequently, utilities across the
nation are expected to step up efforts to buy wind energy and other forms of
renewable energy to offset pollution created by coal-fired power plants.

In King City, wind power is also funneling tourists and tax dollars to the
farming community in northwest Missouri where the economy has historically
ebbed and flowed with the cost of corn and cattle.

The company behind the King City wind farm is St. Louis-based Wind Capital
Group, which plans to open two more wind farms in neighboring Atchison and
Nodaway counties early next year. Wind Capital is targeting that area because
it's the only place in the state that has enough wind to run the 25-ton
turbines.

The 9,000-acre Bluegrass Ridge farm is slated to pay more than $500,000 in
property taxes next year to Gentry County, the largest share of which will go
to the King City school district.

The town is also benefitting from an influx of curious visitors who are
stopping to gawk at the gargantuan turbines rising out of cornfields and cow
pastures.

Last week, a dedication ceremony drew more than 500 people — a little less than
half of King City's population. There are even plans to build a visitors center
not far from the Big Pump, a symbol of the town's energy past that is being
replaced with one that represents a new future in energy.

"It's just breathed new life into this town," said John McKinnon, a local
farmer. "It used to be people didn't know where King City was on the map, but
now they associate it with the wind farm."

The first large-scale wind farms were built in northern California after the
energy crisis of the 1970s. Since then, hundreds more have been constructed in
the nation's windiest states including California, Iowa and Texas.

Wind power is generated in the form of electricity by converting the rotation
of the blades into electrical current by a generator that sits on top of the
turbine tower.

Federal and state studies have shown that northwest Missouri is the only part
of the state that has enough wind to support a commercial development.

So last year, Tom Carnahan, the president of Wind Capital and son of the late
Gov. Mel Carnahan, began building wind farms in the windswept area, north of
St. Joseph.

Similar projects in other states have been opposed because some neighbors think
the turbines are ugly, noisy and will kill birds.

But Carnahan says northwest Missouri residents have overwhelmingly supported
the wind projects and have become cheerleaders for renewable energy.

He's banking on the growing popularity of renewable energy in a state that has
no laws requiring the use of solar, hydropower or wind energy.

Still, he believes the benefits of wind power outweigh its costs.

It's clean. It reduces dependency on foreign oil. And it helps rural economies,
Carnahan says.

"Another part that may be more difficult to quantify is just the enthusiasm
that exists for this project. You just can't put a dollar figure on it, but
people are really proud of the farm," said Carnahan.

Over the next 20 years in King City, the wind power generated by Bluegrass
Ridge will be purchased by the Associated Electric Co-op Inc., of Kansas City
and sold to customers in Missouri, Iowa and Oklahoma.

The co-op will also buy energy from Wind Capital's two other wind farms,
already under construction in the northwest corner of Missouri.

Wind energy, however, is not cheap and will account for only about 1 percent of
the total amount of electricity the co-op sells to its customers.

And while co-op customers can expects to see their rates increase, company
officials say those hikes are mostly due to a growing customer base, rising gas
costs and the fact they're being forced to install pollution-reducing equipment
at their coal-fired power plants.

"If you have a system like ours that's combined, when the wind blows, I'll turn
down the coal plant, or gas plant. That way I'll save fuel and that means there
are less emissions going up in the air," said Jim Jura, Associated's general
manager.

The number of wind customers in Missouri will increase in coming months when
AmerenUE begins purchasing wind energy. As part of its case before the Missouri
Public Service Commission to raise rates, the utility agreed to develop wind
power by 2010.

Bill Barbieri, who oversees the utility's renewable energy section, said Ameren
had talked with Wind Capital Group, but he would not say which company would
get the contract.

In the 1920s, King City's economic prosperity was rooted in the bluegrass seeds
growing throughout the countryside.

But row crops became more lucrative than bluegrass and the community started to
rely more on corn . Never able to attract any good-paying manufacturing jobs,
the city's economy has been stagnant for years. In fact, the local school
district had to slash about 10 percent of its $4 million budget a few years ago.

Now, with the wind farm taxes slated for collection next year, school officials
hope to lure some of the teachers that left due to the budget cuts and add
computers.

"In St. Louis, $200,000 is just a drop in the bucket. But here, it really makes
a difference," said Kendall Ebersold, the school superintendent. 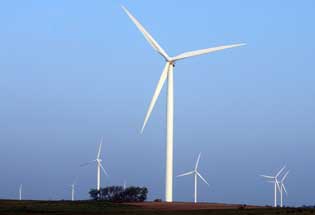 A few of the 27 wind turbines at The Bluegrass Ridge wind farm on Thursday near King City, Mo.
(Huy R. Mach /P-D)