When I first got into ebike design I looked at the different battery chemistries.. cost versus capacity versus safety versus size.

I did a few price comparisons on the net and found out that the cheapest high capacity solution was the AA Nimh battery..

My aim was to create a low cost commuter bike which could handle a 9KM ride to and from work each day.. a bike which didn't obvously look like an high powered electric bike.. (in my state any bike with a rating over 200W watts needs to be registered as a moped so making it look like a normal bike is essential if you want to ride it on bicycle paths because it its registered as a moped you can only ride it on roads)

I think the laws will change when people realise you cant ride an ebike faster than a normal fit athlete can ride a standard bicycle and it is no more dangerous either...
Ebikes are an essential part of the human transition away from fossil fuels onto sustainable transportation methods and so I don't have an ethical problem with bending the rules a little.

All in all the aim of the project was to create a reliable and sustainable computer transport method which cost less than driving a car and paying for petrol/parking/rego/and servicing each week.. which when you I did the math turned out to be $20-$30 a day.. 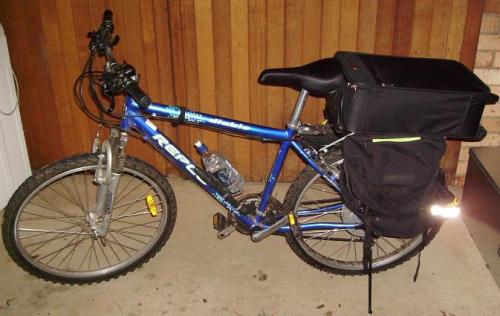 the battery pack is enclosed inside a standard small travel bag with wheels which you can pick up at any discount store for less than $20... its held onto the ebike with a couple of ockey straps which seem to work fine aslong as you don’t take the bike offroad and try to do any tricks. 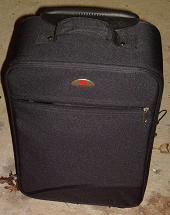 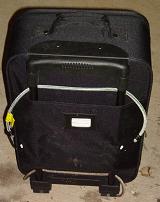 the theoretical capacity of my pack is 60V 26AH using 500 2600Mah Nimh Cells and it weighs 10kg (22 lb) with the 3 chargers included which are Universal smart chargers which can be picked up for $20-25 each. 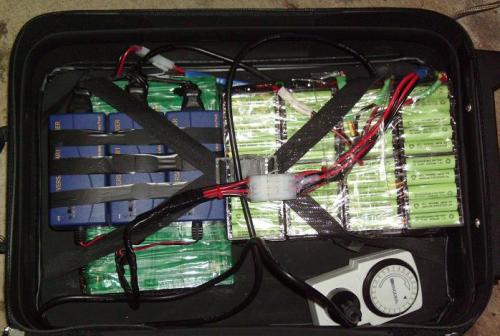 (Note...Do not use the light green batteries pictured here they are sold as 2600Mah Nimh but have an actual capacity of between 600-800 nimh)

the bag does look a bit like a bomb when its opened but when its all zipped up it looks just like any other bag so you can wheel it into the office and charge it while working.
Charging at works means that you only need to have enough capacity for a one way trip which saves on money and weight on the ebike..)

Ok here's any update for anyone reading this blog post.
2 years ago it might have made some sense to build battery packs out of AA cells with the idea of later replacing them with higher capacity cells..
but 2 years on I can see now that the AA cell has pretty much hit a dead end as the technology is crawling..

nowdays with the benefit of hindsight you can buy a LifePo4 20AH battery pack for about $500 USD which weighs about half as much and takes up half the space of the one pictured above at a fairly comparable price.. therefore the ideas in this project have been made redundant....

still it was fun zipping around on AA batteries...